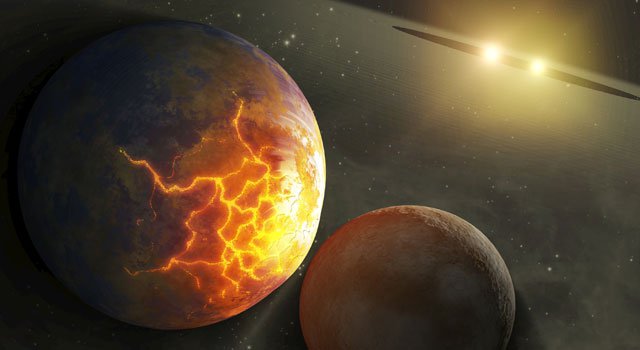 This artist's concept illustrates an imminent planetary collision around a pair of double stars.› Full image and caption
Credit: NASA/JPL-Caltech 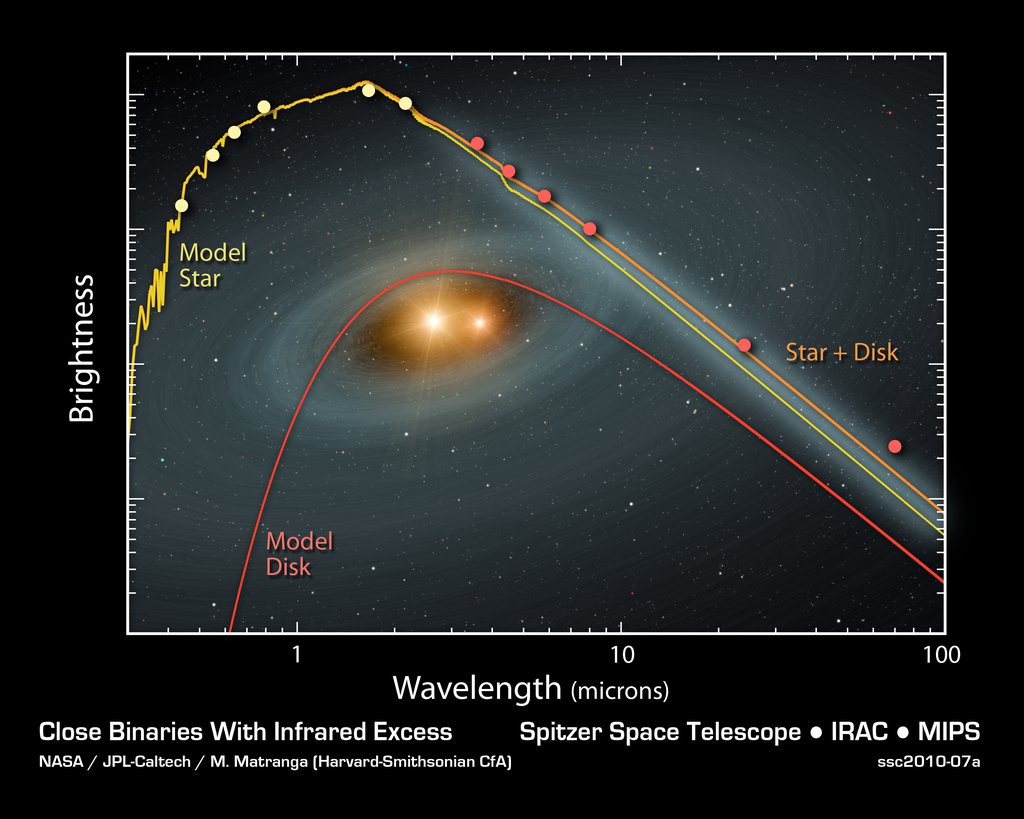 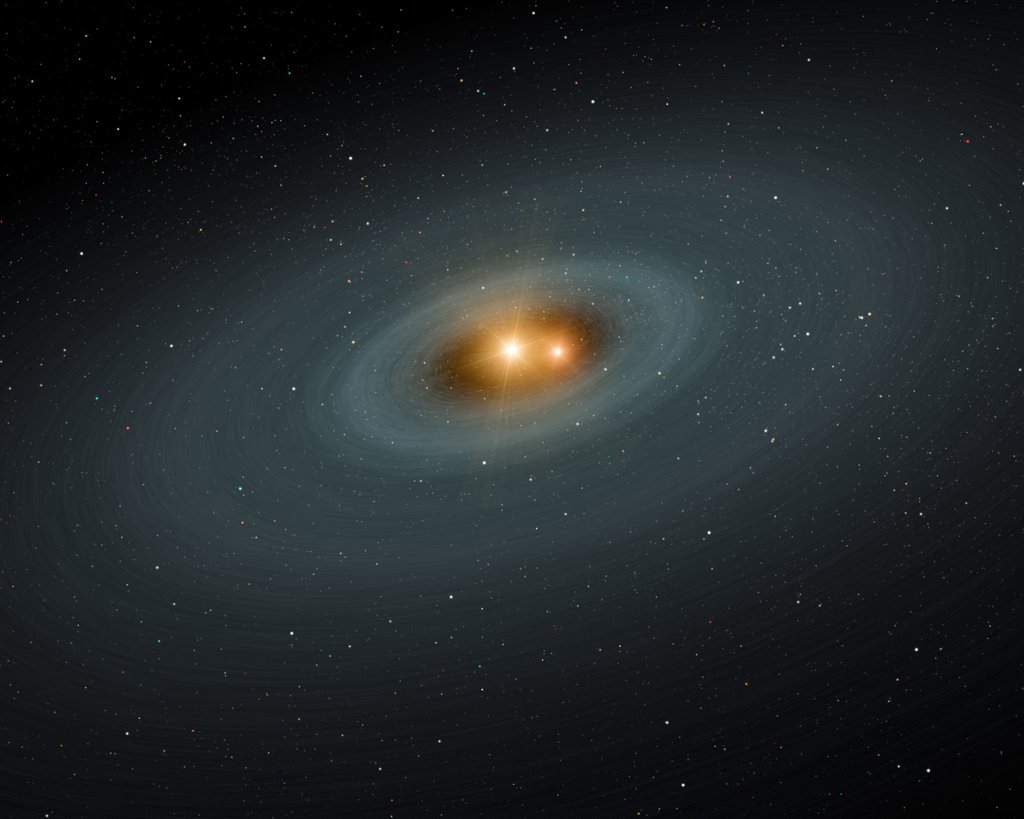 This artist's concept illustrates a tight pair of stars and a surrounding disk of dust -- most likely the shattered remains of planetary smashups.› Full image and caption
Credit: NASA/JPL-Caltech

Tight double-star systems might not be the best places for life to spring up, according to a new study using data from NASA's Spitzer Space Telescope.

PASADENA, Calif. -- Tight double-star systems might not be the best places for life to spring up, according to a new study using data from NASA's Spitzer Space Telescope. The infrared observatory spotted a surprisingly large amount of dust around three mature, close-orbiting star pairs. Where did the dust come from? Astronomers say it might be the aftermath of tremendous planetary collisions.

"This is real-life science fiction," said Jeremy Drake of the Harvard-Smithsonian Center for Astrophysics, Cambridge, Mass. "Our data tell us that planets in these systems might not be so lucky -- collisions could be common. It's theoretically possible that habitable planets could exist around these types of stars, so if there happened to be any life there, it could be doomed."

Drake is the principal investigator of the research, published in the Aug.19 issue of the Astrophysical Journal Letters.

The particular class of binary, or double, stars in the study are about as snug as stars get. Named RS Canum Venaticorums, or RS CVns for short, they are separated by only about two million miles (3.2 million kilometers), or two percent of the distance between Earth and our sun. The stellar pairs orbit around each other every few days, with one face on each star perpetually locked and pointed toward the other.

The close-knit stars are similar to the sun in size and are probably about a billion to a few billion years old -- roughly the age of our sun when life first evolved on Earth. But these stars spin much faster, and, as a result, have powerful magnetic fields, and giant, dark spots. The magnetic activity drives strong stellar winds -- gale-force versions of the solar wind -- that slow the stars down, pulling the twirling duos closer over time. And this is where the planetary chaos may begin.

As the stars cozy up to each other, their gravitational influences change, and this could cause disturbances to planetary bodies orbiting around both stars. Comets and any planets that may exist in the systems would start jostling about and banging into each other, sometimes in powerful collisions. This includes planets that could theoretically be circling in the double stars' habitable zone, a region where temperatures would allow liquid water to exist. Though no habitable planets have been discovered around any stars beyond our sun at this point in time, tight double-star systems are known to host planets; for example, one system not in the study, called HW Vir, has two gas-giant planets.

"These kinds of systems paint a picture of the late stages in the lives of planetary systems," said Marc Kuchner, a co-author from NASA Goddard Space Flight Center in Greenbelt, Md. "And it's a future that's messy and violent."

Spitzer spotted the infrared glow of hot dusty disks, about the temperature of molten lava, around three such tight binary systems. One of the systems was originally flagged as having a suspicious excess of infrared light in 1983 by the Infrared Astronomical Satellite. In addition, researchers using Spitzer recently found a warm disk of debris around another star that turned out to be a tight binary system.

The astronomy team says that dust normally would have dissipated and blown away from the stars by this mature stage in their lives. They conclude that something -- most likely planetary collisions -- must therefore be kicking up the fresh dust. In addition, because dusty disks have now been found around four, older binary systems, the scientists know that the observations are not a fluke. Something chaotic is very likely going on.

If any life forms did exist in these star systems, and they could look up at the sky, they would have quite a view. Marco Matranga, first author of the paper, from the Harvard-Smithsonian Center for Astrophysics and now a visiting astronomer at the Palermo Astronomical Observatory in Sicily, said, "The skies there would have two huge suns, like the ones above the planet Tatooine in 'Star Wars.'"

Other authors include V.L. Kashyap of the Harvard-Smithsonian Center for Astrophysics; and Massimo Marengo of Iowa State University, Ames.

The Infrared Astronomical Satellite, known commonly by its acronym, IRAS, was a joint project between NASA, the Netherlands and the United Kingdom.