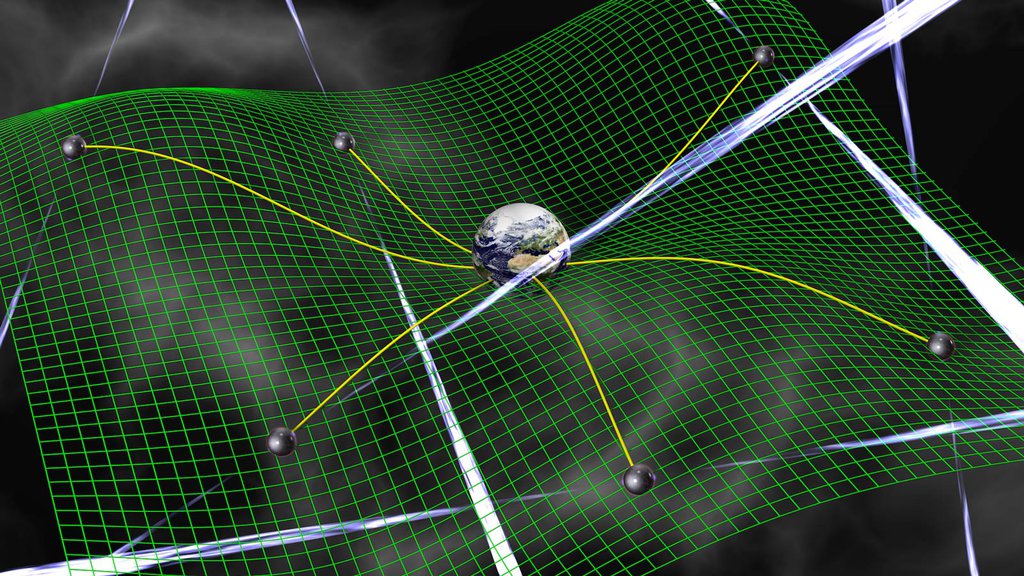 Gravitational waves are ripples in space-time, represented by the green grid, produced by accelerating bodies such as interacting supermassive black holes. These waves affect the time it takes for radio signals from pulsars to arrive at Earth.
Credit: David Champion

"Detecting this signal is possible if we are able to monitor a sufficiently large number of pulsars spread across the sky," said Stephen Taylor, lead author of the paper published this week in The Astrophysical Journal Letters. He is a postdoctoral researcher at NASA's Jet Propulsion Laboratory, Pasadena, California. "The smoking gun will be seeing the same pattern of deviations in all of them." Taylor and colleagues at JPL and the California Institute of Technology in Pasadena have been studying the best way to use pulsars to detect signals from low-frequency gravitational waves. Pulsars are highly magnetized neutron stars, the rapidly rotating cores of stars left behind when a massive star explodes as a supernova.

Einstein's general theory of relativity predicts that gravitational waves -- ripples in spacetime -- emanate from accelerating massive objects. Nanohertz gravitational waves are emitted from pairs of supermassive black holes orbiting each other, each of which contain millions or a billion times more mass than those detected by LIGO. These black holes each originated at the center of separate galaxies that collided. They are slowly drawing closer together and will eventually merge to create a single super-sized black hole.

As they orbit each other, the black holes pull on the fabric of space and create a faint signal that travels outward in all directions, like a vibration in a spider's web. When this vibration passes Earth, it jostles our planet slightly, causing it to shift with respect to distant pulsars. Gravitational waves formed by binary supermassive black holes take months or years to pass Earth and require many years of observations to detect.

"Galaxy mergers are common, and we think there are many galaxies harboring binary supermassive black holes that we should be able to detect," said Joseph Lazio, one of Taylor's co-authors, also based at JPL. "Pulsars will allow us to see these massive objects as they slowly spiral closer together."

Once these gigantic black holes get very close to each other, the gravitational waves are too short to detect using pulsars. Space-based laser interferometers like eLISA, a mission being developed by the European Space Agency with NASA participation, would operate in the frequency band that can detect the signature of supermassive black holes merging. The LISA Pathfinder mission, which includes a stabilizing thruster system managed by JPL, is currently testing technologies necessary for the future eLISA mission.

Finding evidence for supermassive black hole binaries has been a challenge for astronomers. The centers of galaxies contain many stars, and even monstrous black holes are quite small -- comparable to the size of our solar system. Seeing visible signatures of these binaries amid the glare of the surrounding galaxy has been difficult for astronomers.

Radio astronomers search instead for the gravitational signals from these binaries. In 2007, NANOGrav began observing a set of the fastest-rotating pulsars to try to detect tiny shifts caused by gravitational waves.

Pulsars emit beams of radio waves, some of which sweep across Earth once every rotation. Astronomers detect this as a rapid pulse of radio emission. Most pulsars rotate several times a second. But some, called millisecond pulsars, rotate hundreds of times faster.

"Millisecond pulsars have extremely predictable arrival times, and our instruments are able to measure them to within a ten-millionth of a second," said Maura McLaughlin, a radio astronomer at West Virginia University in Morgantown and member of the NANOGrav team. "Because of that, we can use them to detect incredibly small shifts in Earth's position."

But astrophysicists at JPL and Caltech caution that detecting faint gravitational waves would likely require more than a few pulsars. "We're like a spider at the center of a web," said Michele Vallisneri, another member of the JPL/Caltech research group. "The more strands we have in our web of pulsars, the more likely we are to sense when a gravitational wave passes by."

Vallisneri said accomplishing this feat will require international collaboration. "NANOGrav is currently monitoring 54 pulsars, but we can only see some of the southern hemisphere. We will need to work closely with our colleagues in Europe and Australia in order to get the all-sky coverage this search requires."

The feasibility of this approach was recently called into question when a group of Australian pulsar researchers reported that they were unable to detect such signals when analyzing a set of pulsars with the most precise timing measurements. After studying this result, the NANOGrav team determined that the reported non-detection was not a surprise, and resulted from the combination of optimistic gravitational wave models and analysis of too few pulsars. Their one-page response was released recently via the arXiv electronic print service.

Despite the technical challenges, Taylor is confident their team is on the right track. "Gravitational waves are washing over Earth all the time," Taylor said. "Given the number of pulsars being observed by NANOGrav and other international teams, we expect to have clear and convincing evidence of low-frequency gravitational waves within the next decade."

NANOGrav is a collaboration of over 60 scientists at more than a dozen institutions in the United States and Canada. The group uses radio pulsar timing observations acquired at NRAO's Green Bank Telescope in West Virginia and at Arecibo Radio Observatory in Puerto Rico to search for ripples in the fabric of spacetime. In 2015, NANOGrav was awarded $14.5 million by the National Science Foundation to create and operate a Physics Frontiers Center.

Written by Elizabeth Ferrara of NANOGrav