A dragon-shaped cloud of dust seems to fly out from a bright explosion in this infrared light image (bottom) from NASA's Spitzer Space Telescope, a creature that is entirely cloaked in shadow when viewed in visible part of the spectrum (top).› Full image and caption
Credit: NASA/JPL-Caltech/Penn State/DSS 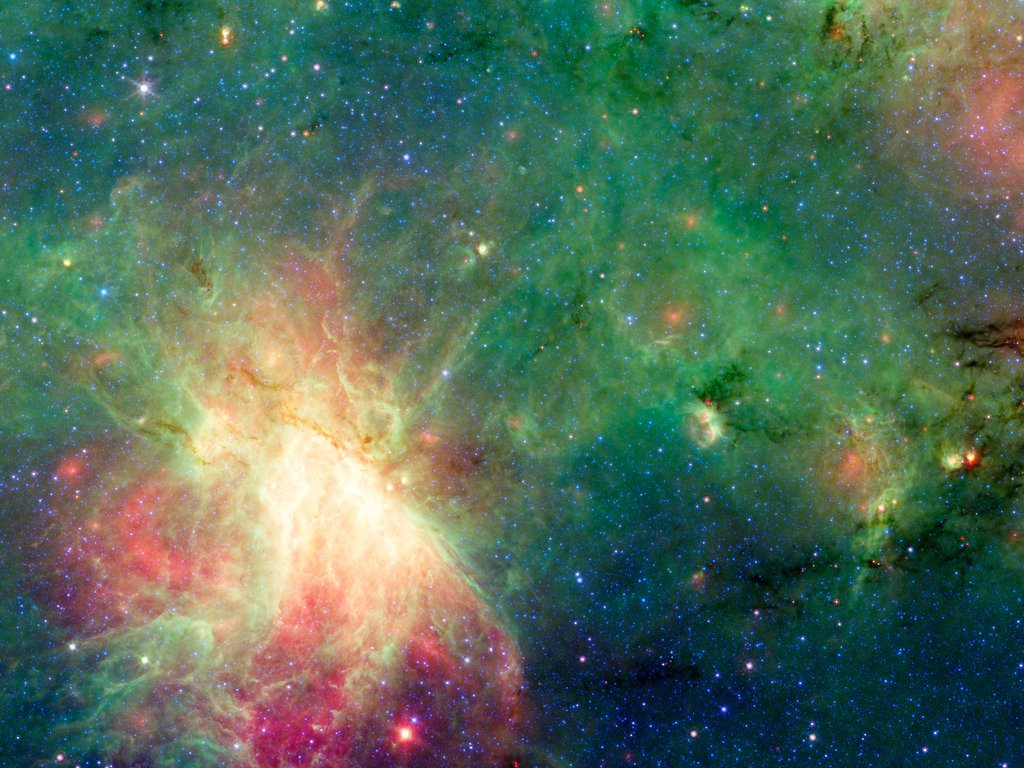 A dragon-shaped cloud of dust seems to fly out from a bright explosion in this infrared light image from NASA's Spitzer Space Telescope.› Full image and caption
Credit: NASA/JPL-Caltech/Penn State

A dragon-shaped cloud of dust seems to fly with the stars in a new image from NASA's Spitzer Space Telescope (bottom). In visible light (top), the creature disappears into the mist.

A dragon-shaped cloud of dust seems to fly with the stars in a new image from NASA's Spitzer Space Telescope (bottom). In visible light (top), the creature disappears into the clouds -- perhaps it's "frolicking in the autumn mist" like Puff, the Magic Dragon, from the famous Peter, Paul and Mary song.

The infrared image has revealed that this creature, a dark cloud called M17 SWex, is forming stars at a furious rate but has not yet spawned the most massive type of stars, known as O stars. Such stellar behemoths, however, light up the M17 nebula at the image's center and have also blown a huge "bubble" in the gas and dust that forms M17's luminous left edge.

The stars and gas in this region are now passing though the Sagittarius spiral arm of the Milky Way (moving from right to left), touching off a galactic "domino effect." The youngest episode of star formation is playing out inside the dusty dragon as it enters the spiral arm. Over time, this area will flare up like the bright M17 nebula, glowing in the light of young massive stars. An older burst of star formation blew the bubble seen in the region to the far left, called M17 EB.

The visible-light view of the area clearly shows the bright M17 nebula, as well as the glowing hot gas filling the "bubble" to its left. However the M17 SWex "dragon" is hidden within dust clouds that are opaque to visible light. It takes an infrared view to catch the light from these shrouded regions and reveal the earliest stages of star formation.

The bottom image is a three-color composite that shows infrared observations from two Spitzer instruments. Blue represents 3.6-micron light and green shows light of 8 microns, both captured by Spitzer's infrared array camera. Red is 24-micron light detected by Spitzer's multiband imaging photometer. The bottom visible-light image is a composite of visible-light data from the Digitized Sky Survey (DSS) from the UK Schmidt telescope. The image combines two observations that represent the blue and red light from the region.

For a more detailed feature story about the science in this image, visit http://www.spitzer.caltech.edu/news/1143.

This image was taken before Spitzer ran out of its liquid coolant in May 2009, beginning its warm mission.