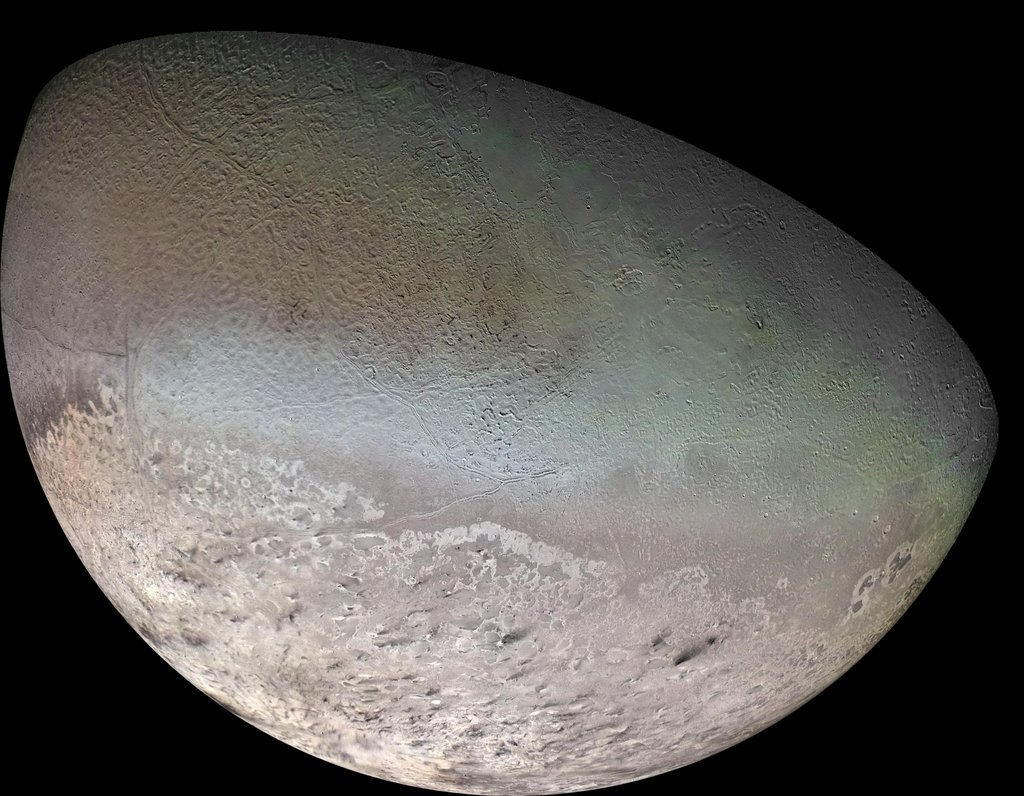 This global color mosaic of Triton, taken in 1989 by NASA's Voyager 2 shows Triton, the largest satellite of Neptune. Triton has the coldest surface known anywhere in the solar system; it is so cold that most of Triton's nitrogen is condensed as frost.
Credit: NASA/JPL/USGS
Full Image Details

One of four concepts being considered for a Discovery Program mission, Trident would investigate one of the solar system's most unusual worlds.

Voyager 2 is the only spacecraft ever to have flown past Neptune, and it left a lot of unanswered questions. The views were as stunning as they were puzzling, revealing massive, dark plumes of icy material spraying out from Triton's surface. But how? Images showed that the icy landscape was young and had been resurfaced over and over with fresh material. But what material, and from where?

How could an ancient moon six times farther from the Sun than Jupiter still be active? Is there something in its interior that is still warm enough to drive this activity?

A new mission competing for selection under NASA's Discovery Program aims to untangle these mysteries. Called Trident, like the three-pronged spear carried by the ancient Roman sea god Neptune, the team is one of four that is developing concept studies for new missions. Up to two will be selected by summer 2021 to become a full-fledged mission and will launch later in the decade.

Investigating how Triton has changed over time would give scientists a better understanding of how solar system bodies evolve and work.

The oddities of Triton could fill an almanac: As Neptune rotates, Triton orbits in the opposite direction. No other large moon in the solar system does that. And Triton's orbit lies at an extreme tilt, offset from Neptune's equator by 23 degrees. About three-quarters the diameter of our own Moon, Triton isn't where it used to be, either. It likely migrated from the Kuiper Belt, a region beyond Neptune of icy bodies left over from the early solar system.

Triton has an unusual atmosphere, too: Filled with charged particles, a layer called the ionosphere is 10 times more active than that of any other moon in the solar system.

That last trait is especially strange, because ionospheres generally are charged by solar energy. But Triton and Neptune are far from the Sun - 30 times farther from the Sun than Earth, so some other energy source must be at work. (It takes 165 Earth years for Neptune to complete one orbit around the Sun.)

And Triton's climate is dynamic and changing, with a steady flow of organic material, likely nitrogen, snowing onto the surface.

"Triton has always been one of the most exciting and intriguing bodies in the solar system," said Louise Prockter, director of the Lunar and Planetary Institute/Universities Space Research Association in Houston. As principal investigator, she would lead the proposed Trident mission, and NASA's Jet Propulsion Laboratory in Southern California would manage it. "I've always loved the Voyager 2 images and their tantalizing glimpses of this bizarre, crazy moon that no one understands," Prockter added. 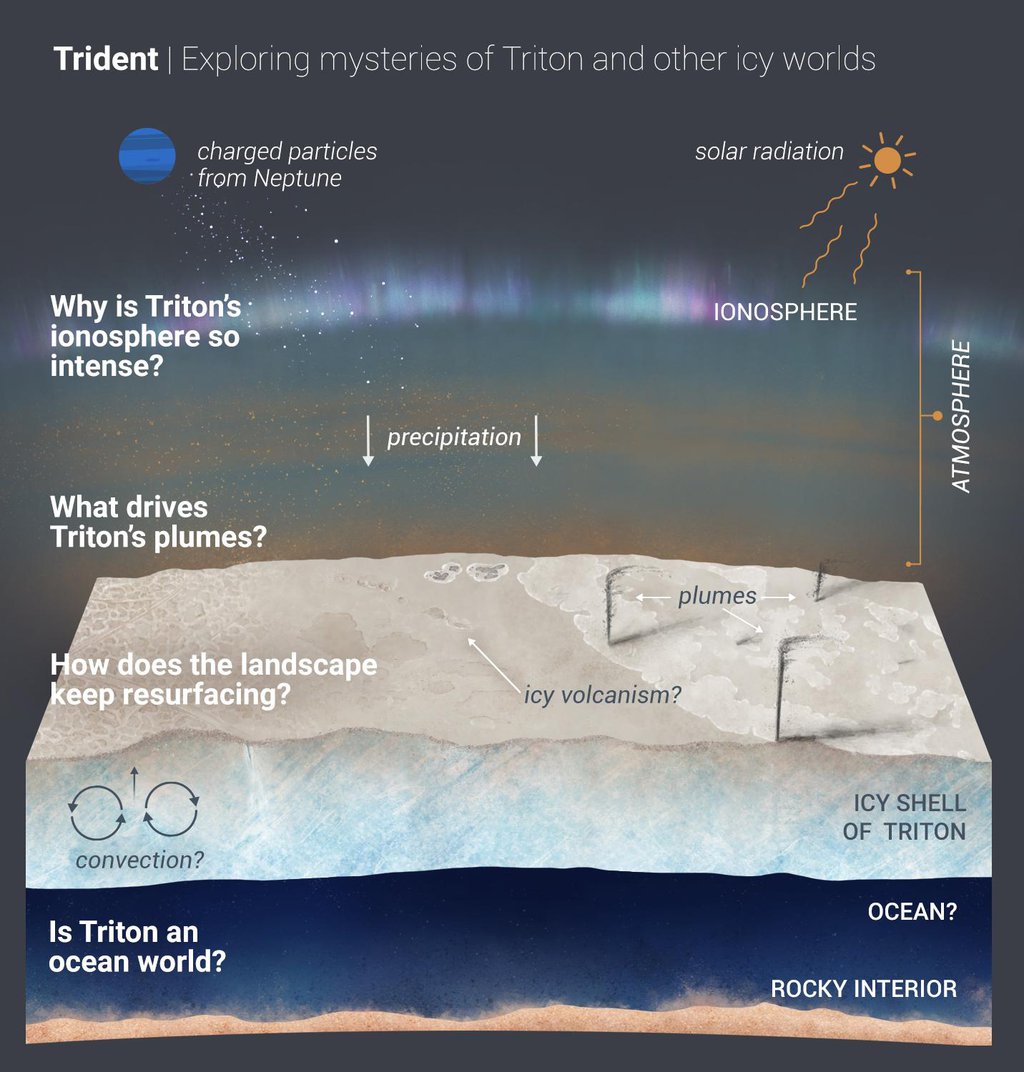 Those mysterious plumes Voyager 2 spotted are especially intriguing. Plumes seen on Saturn's moon Enceladus, and possibly present on Jupiter's moon Europa, are thought to be caused by water from the interior being forced through thick, icy crusts. If an ocean is the source of the plumes on Triton (which lies much farther out in the solar system than Europa and Enceladus), the discovery would give scientists new information about how interior oceans form. Unlike other known ocean worlds, Triton's potential ocean likely developed after it was captured by Neptune's gravity.

It would also expand scientists' understanding of where we might find water. Figuring out what factors lead to a solar system body having the necessary ingredients to be habitable, which include water, is one Trident's three major goals. The spacecraft would carry an instrument to probe the moon's magnetic field to determine if an ocean lies inside, while other instruments would investigate the intense ionosphere, organic-rich atmosphere and bizarre surface features.

A second goal is to explore vast, unseen lands. Triton offers the largest unexplored solid surface in the solar system this side of the Kuiper Belt. Most of what we know of the moon came from Voyager 2 data, but we've only seen 40% of the moon's surface. Trident would map most of the remainder.

And Trident would use its full-frame imaging camera to capture the same plume-rich area Voyager 2 imaged - in full "Neptune-shine," when the Sun's reflected light illuminates the dark side of Triton. That way scientists could observe changes since the last visit and learn more about just how active Triton is.

Trident's third major goal is to understand how that mysterious surface keeps renewing itself. The surface is remarkably young, geologically speaking (possibly only 10 million years old in a 4.6-billion-year-old solar system) and has almost no visible craters. There's also the question of why it looks so different from other icy moons, and features unusual landforms like dimpled "cantaloupe terrains" and protruding "walled plains." The answers could shed light on how landscapes develop on other icy bodies.

"Triton is weird, but yet relevantly weird, because of the science we can do there," said Karl Mitchell Trident project scientist at JPL. "We know the surface has all these features we've never seen before, which motivates us to want to know 'How does this world work?'

"As we said to NASA in our mission proposal, Triton isn't just a key to solar system science - it's a whole keyring: a captured Kuiper Belt object that evolved, a potential ocean world with active plumes, an energetic ionosphere and a young, unique surface."

This interactive model of Triton isn't complete but is based on available images. To see how it compares to our own Moon, zoom in and give the moons a spin, or use the search function at bottom for more. View the full interactive experience at Eyes on the Solar System. Credit: NASA/JPL-Caltech

The proposed launch date in October 2025 (with a backup in October 2026) would take advantage of a once-in-a-13-year window, when Earth is properly aligned with Jupiter. The spacecraft would use the gravitational pull of Jupiter as a slingshot straight to Triton for an extended 13-day encounter in 2038.

"The mission designers and navigators are so good at this," said JPL's William Frazier, project systems engineer of Trident. "After 13 years of flying through the solar system, we can confidently skim the upper edge of Triton's atmosphere - which is pretty mind-boggling."

And it may seem that time moves slowly in the outer reaches of the solar system, where Neptune's years are long. Ironically for Triton, the long timeline presents limitations. If Trident arrives before 2040, the team could perform its test of what's powering the plume activity. Any later, and the Sun moves too far north ... for the next hundred years.