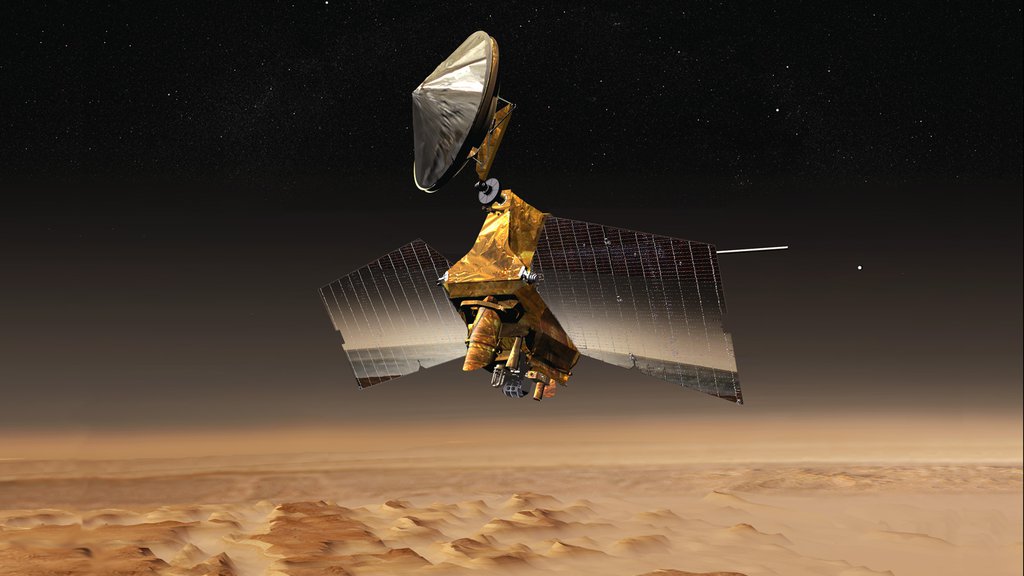 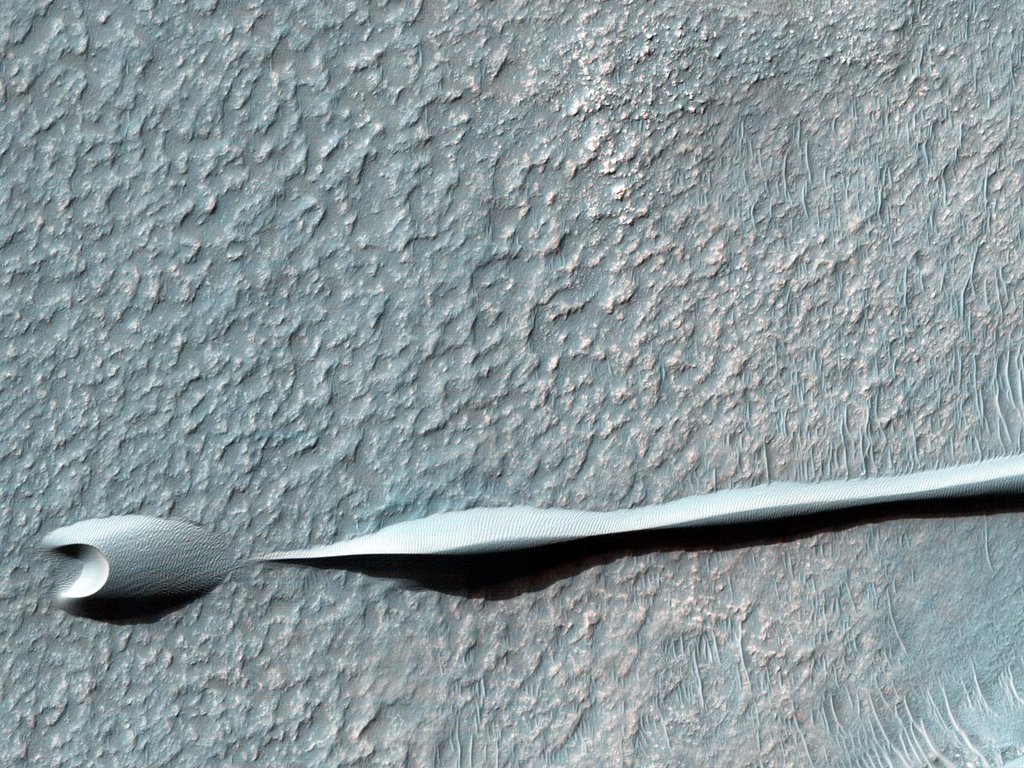 Sand dunes such as those seen in this image have been observed to creep slowly across the surface of Mars through the action of the wind.› Full image and caption
Credit: NASA/JPL-Caltech/Univ. of Arizona

NASA's Mars Reconnaissance Orbiter, which has overhauled understanding of the Red Planet since 2006, has now returned more than 200 trillion bits of data.

NASA's Mars Reconnaissance Orbiter, which has overhauled understanding of the Red Planet since 2006, has passed 200 terabits in the amount of science data returned. The data returned by the mission alone is more than three times the total data returned via NASA's Deep Space Network for all the other missions managed by NASA's Jet Propulsion Laboratory, Pasadena, Calif., over the past 10 years.

While the 200 terabits number includes all the data this orbiter has relayed to Earth from robots on the surface of Mars, about 99.9 percent of the volume has come from the six science instruments aboard Mars Reconnaissance Orbiter. The 200 terabits are equivalent to the data volume in three nonstop months of high-definition video. The number does not include the engineering data that specialists operating the orbiter from JPL and Lockheed Martin Space Systems, Denver, use for monitoring its health and performance.

The spacecraft pours data Earthward using a dish antenna 10 feet (3 meters) across and a transmitter powered by 215 square feet (20 square meters) of solar cells. Multiple sessions each day with giant dish antennas of the Deep Space Network in California, Spain and Australia enable Earth to receive such a torrent of data from the orbiter.

"The sheer volume is impressive, but of course what's most important is what we are learning about our neighboring planet," said JPL's Rich Zurek, the project scientist for the Mars Reconnaissance Orbiter.

The orbiter's instruments have examined Mars from subsurface to atmosphere in unprecedented detail. One instrument has provided images revealing features as small as a desk in surface areas equivalent to one-third of the United States (1.92 percent of Mars' surface). Another has covered areas equivalent to about 82 percent of Earth's land area (83.6 percent of Mars' surface), with resolution showing features smaller than a tennis court. These cameras have viewed many areas repeatedly, providing three-dimensional information from stereo and revealing several types of landscape changes over time. Other instruments identify surface minerals, probe underground layers, examine cross-sections of the atmosphere and track weather globally.

"The mission has taught us about three very different periods of Mars history," Zurek said.

Its observations of the heavily cratered terrains of Mars, the oldest on the planet, show that different types of ancient watery environments formed water-related minerals. Some of these would have been more favorable for life than others. In more recent times, water appears to have cycled as a gas between polar ice deposits and lower-latitude deposits of ice and snow. Extensive layering in ice or rock probably took hundreds of thousands to millions of years to form. The present climate is also dynamic, with volatile carbon dioxide and, possibly, flows of briny water forming dark streaks that are observed to appear in the warmest seasons and places and fade in colder weather.

"Mars Reconnaissance Orbiter has shown that Mars is still an active planet, with changes such as new craters, avalanches and dust storms," Zurek said. "Mars is a partially frozen world, but not frozen in time."

Each of the 200 trillion bits of science data from the orbiter has followed a complex path, aided by sophisticated software to make it feasible for a small team to handle tens of billions of new bits daily and get the data products to the appropriate scientists.

Data gathered by the orbiter's instruments and relayed from rovers are recorded onto the orbiter's central memory. Each orbit around Mars takes the spacecraft about two hours. For part of each orbit, Mars itself usually blocks the communication path to Earth. When Earth is in view, a Deep Space Network antenna on whichever part of Earth is turned toward Mars at that hour can be listening. Complex preparations coordinate scheduling the use of the network's antennas by all deep-space missions -- 32 of them this month. Mars Reconnaissance Orbiter typically gets several sessions every day.

"The Deep Space Network collects the incoming data into 30-minute chunks," said Mars Reconnaissance Orbiter software engineer Bryan Allen, of JPL. "At that point, it doesn't matter which products are in it -- just a big pile of bits."

The chunks of mixed data from the antenna stations in California, Spain and Australia come to JPL, where software sorts it into specific products, such as an image from a camera, measurements from a scan of the atmosphere, radar readings from the subsurface sounder, or data from a rover. Another process at JPL determines which products to send where -- such as to a mineral-mapping team in Maryland, a camera team in Arizona, a radar team in Italy. On a typical recent day, the system sorted 58 billion bits from Mars Reconnaissance Orbiter into 303 data products.

The Mars Reconnaissance Orbiter mission met all its science goals in a two-year primary science phase ending in 2008. Three extensions, the latest beginning in 2012, have added to the science returns. The longevity of this mission and of NASA's even longer-lived Mars Odyssey orbiter, which has been studying Mars since 2002, have given researchers tools to study seasonal and longer-term changes on the Red Planet.