The Context Camera on NASA's Mars Reconnaissance Orbiter has been taking images of Mars since 2006. This animation shows, at one frame per month, how these observations have accumulated to cover more than 99 percent of Mars.› Full image and caption
Credit: NASA/JPL-Caltech/MSSS 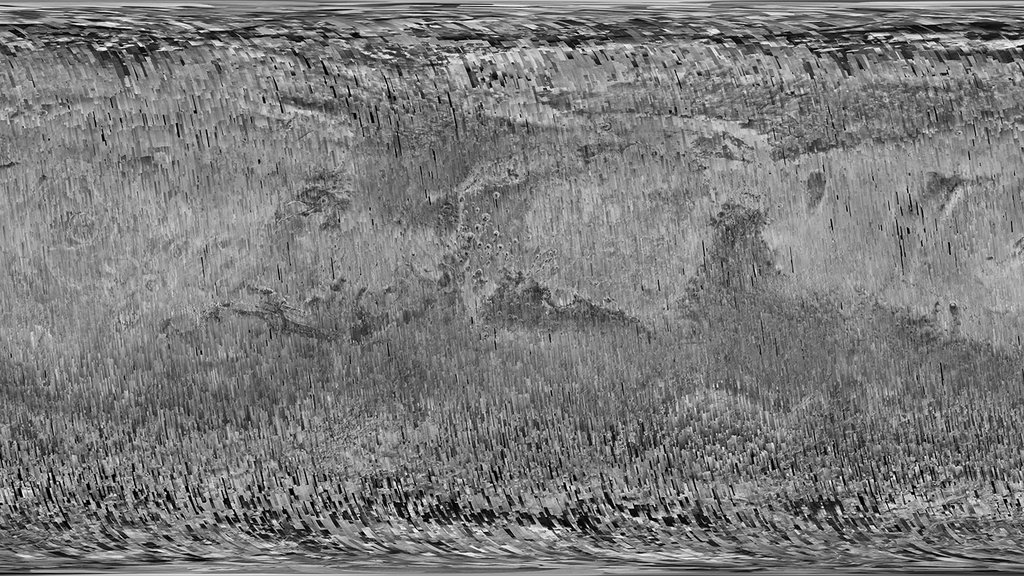 In early 2017, after more than a decade of observing Mars, the Context Camera on NASA's Mars Reconnaissance Orbiter (MRO) surpassed 99 percent coverage of the entire planet. This mosaic shows that global coverage. › Full image and caption 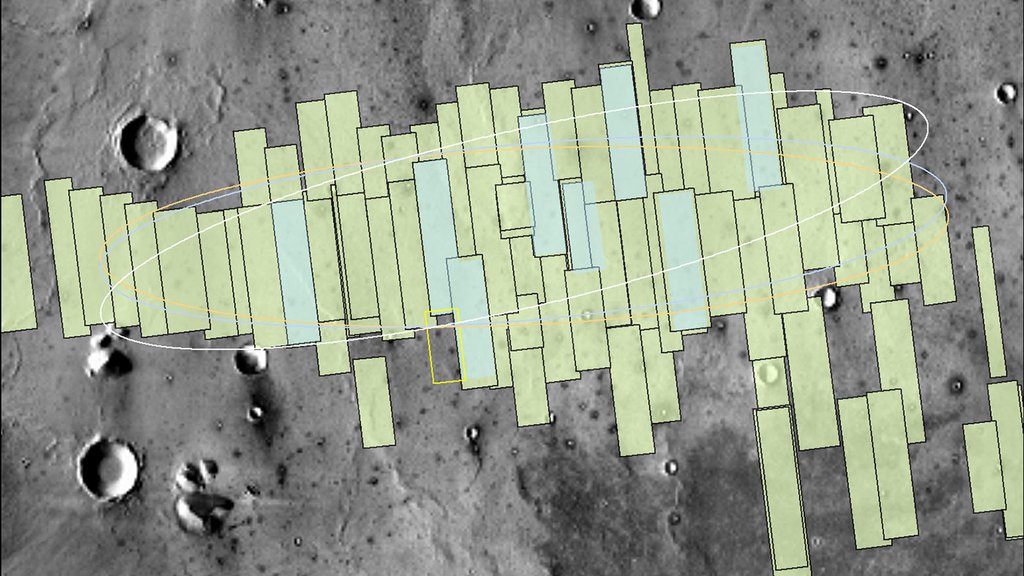 This map shows the footprints of images taken by the HiRISE camera on NASA's Mars Reconnaissance Orbiter as part of advance analysis of the area where NASA's InSight mission will land in 2018.› Full image and caption

The most data-productive Mars spacecraft passed orbit 50,000 this week, continuing to compile the most sharp-eyed global coverage ever gathered by a camera at the Red Planet.

The most data-productive spacecraft yet at Mars swept past its 50,000th orbit this week, continuing to compile the most sharp-eyed global coverage ever accomplished by a camera at the Red Planet.

In addition, the spacecraft -- NASA's Mars Reconnaissance Orbiter (MRO) -- recently aided preparations for NASA's next mission to Mars, the InSight lander. Insight will launch next year on a mission to study the planet's deep interior. Meanwhile, the orbiter continues diverse science observations of Mars and communications-relay service for two active Mars rovers, Curiosity and Opportunity.

MRO's Context Camera (CTX) exploits a sweet spot in the balance between resolution and image file size. With a resolution of about 20 feet (6 meters) per pixel in images of the Martian surface, it has provided a library of images now covering 99.1 percent of Mars. That is approximately equivalent to the land area of Earth. No other camera ever sent to Mars has photographed so much of the planet in such high resolution.

The Context Camera has taken about 90,000 images since the spacecraft began examining Mars from orbit in late 2006. Each one reveals shapes of features down to sizes smaller than a tennis court, in a swath of ground about 18.6 miles (30 kilometers) wide.

"Reaching 99.1-percent coverage has been tricky because a number of factors, including weather conditions, coordination with other instruments, downlink limitations, and orbital constraints, tend to limit where we can image and when," said Context Camera Team Leader Michael Malin of Malin Space Science Systems, San Diego.

In addition to observing nearly the entire planet at least once, the Context Camera has observed 60.4 percent of the planet more than once. These observations aid science directly and also certify the safety of future landing sites.

Malin said, "Single coverage provides a baseline we can use for comparison with future observations, as we look for changes. Re-imaging areas serves two functions: looking for changes and acquiring stereoscopic views from which we can make topographic maps."

A dramatic type of change the Context Camera has documented more than 200 times is a fresh impact crater appearing between the times of two observations. These images enabled scientists to calculate the rate at which small asteroids, or bits of comets, are colliding with Mars. Some of the fresh impacts reveal white material interpreted as water ice. The latitudes and estimated depths of the ice-exposing craters provide evidence about the distribution of buried ice near the surface. MRO's Shallow Radar has found ice farther underground, but this very shallow ice would go undetected if not for its exposure by impacts.

One of MRO's other cameras, the High Resolution Imaging Science Experiment (HiRISE), can zoom in on the new impact craters found by the Context Camera. For some of these craters, HiRISE and MRO's Compact Reconnaissance Imaging Spectrometer for Mars have confirmed the presence of water ice. However, even though MRO has returned more than 300 terabits of science data, the much higher spatial resolution of HiRISE has limited its coverage of Mars' surface to about three percent. A third MRO camera, the Mars Color Imager, observes almost the entire planet every day to track weather change. Another instrument, the Mars Climate Sounder, records vertical profiles of the atmosphere's temperatures and suspended particles.

The spacecraft was launched Aug. 12, 2005. It entered an elongated orbit of Mars in March 2006, then spent several months using friction with Mars' upper atmosphere to revise its orbit. Since beginning its science operations in November 2006, MRO has been flying near-polar orbits lasting about two hours, at altitudes from 155 to 196 miles (250 to 316 kilometers). The mission completed its 50,000th orbit on Monday, March 27.

"After 11 and a half years in flight, the spacecraft is healthy and remains fully functional," said MRO Project Manager Dan Johnston at NASA's Jet Propulsion Laboratory, Pasadena, California. "It's a marvelous vehicle that we expect will serve the Mars Exploration Program and Mars science for many more years to come."

On March 22, the mission made the latest adjustment to the orbit, with a 45.1-second burn of six intermediate-size rocket engines, each of which provides 5 pounds (22 newtons) of thrust. This maneuver revised the orbit orientation, so that the spacecraft can be at the right place at the right time, on Nov. 26, 2018, to receive critical radio transmissions from NASA's InSight Mars lander as it descends to the surface.

MRO has already provided more than 60 images from HiRISE for advance analysis of the landing region for InSight. In a broad plain of the Elysium Planitia region of equatorial Mars, InSight will use a seismometer and heat probe to examine the interior of Mars to better understand the formation process of rocky planets like Earth. The final MRO image for assessment of this landing area will be taken Thursday, March 30.

For additional information about InSight, visit: