NASA's Spitzer Space Telescope is an infrared observatory that has been used to study objects from our own solar system all the way to the edge of the universe. The mission’s list of accomplishments is long and includes some of the first investigations of exoplanet atmospheres (planets around stars other than the Sun); the detection of seven Earth-size exoplanets around the TRAPPIST-1 star (the most rocky planets ever found around a single star); surprising revelations about some of the oldest galaxies in the universe; and the discovery of a new ring around Saturn. The powerful observational capabilities of this 16-year mission lifted the veil on the infrared universe.

It has been said that Spitzer was designed to study "the cold, the old and the dusty." As an infrared observatory, it can see things too cold to emit visible light, including exoplanets, brown dwarfs, comets and asteroids. With its ability to view objects that are very far away, Spitzer is able to peer into our universe's deep past. And its observations of dust — a substance prevalent throughout most galaxies and mixed with gas in clouds from which stars and planets are born — reveals physical features and morphologies that often can't be seen in other wavelengths of light. Spitzer's science investigations have yielded hundreds of breathtaking images over its long lifetime, and its spectroscopic capabilities provide insights into the chemical compositions of the telescope's targets.

Over the past 16 years, thousands of scientists from around the world have conducted observations with Spitzer, and over 8,600 papers (and counting) have been published using the workhorse observatory's data. All the data that the telescope has compiled during its lifetime will remain in a publicly accessible archive for the foreseeable future. Astronomers already use that archive for new analyses and to complement work by other observatories, and they're expected to continue doing so long after the spacecraft has been decommissioned.

15 of Spitzer's Greatest Discoveries From 15 Years in Space: 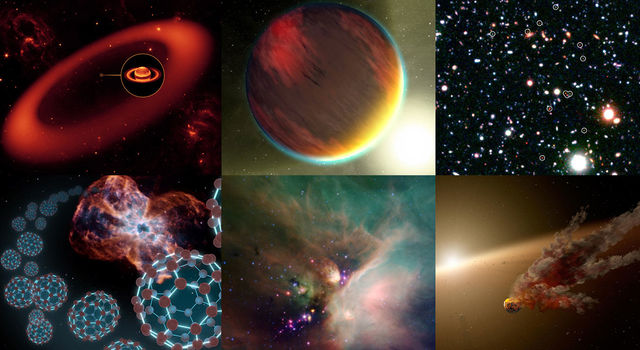 Protoplanetary disks and the formation of planetary systems:

Exoplanets (planets outside our solar system):