Perseverance will be the fifth rover NASA has sent to Mars. Each of these rovers has carried cameras and other instruments to study the Martian surface. As opposed to stationary landers, like InSight and Phoenix, rovers can drive into craters, up slopes, and along sand dunes, allowing scientists and engineers to more fully explore the planet. All of NASAâs Mars rovers have been built at the agencyâs Jet Propulsion Laboratory.

For an interactive 3-D experience of the rover, visit Mars 2020 Rover

The Perseverance rover and other major Mars 2020 mission hardware (such as the cruise stage, descent stage, back shell, and heat shield) build upon the success of NASAâs Curiosity rover (part of the Mars Science Laboratory mission) and include many heritage components. So how much bigger and heavier is Perseverance than Curiosity? Perseveranceâs chassis is about 5 inches (3 centimeters) longer, and the rover is about 278 pounds (126 kilograms) heavier than Curiosity. 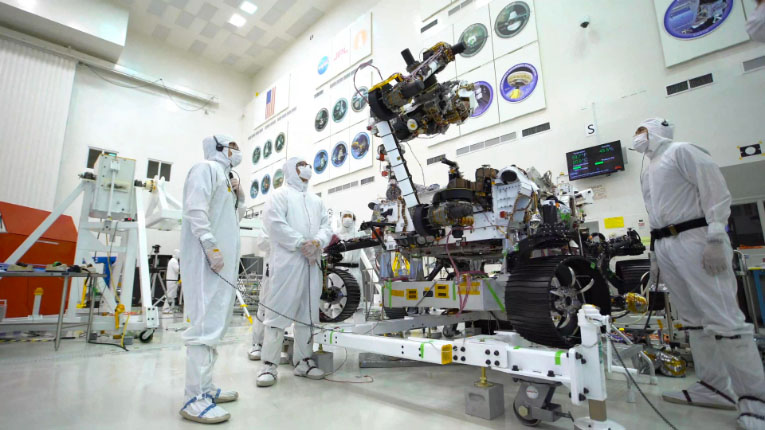 Curiosity is equipped with a robotic arm that extends 7 feet (2 meters) and wields a rotating 65-pound (30-kilogram) turret â a kind of robotic âhandâ equipped with a scientific camera, chemical analyzers, and rock drill. Like Curiosity, Perseveranceâs robotic arm is equipped with a rotating turret, which includes a rock drill, science instruments, and a camera. But while Perseveranceâs arm is 7 feet (2 meters), just like Curiosityâs, its turret weighs more â 99 pounds (45 kilograms) â because it carries larger instruments and a larger drill, which will cut intact rock cores. Those cores will then be placed in sample tubes via a complex storage system. (Curiosity, on the other hand, pulverizes rock for its instruments to study.) 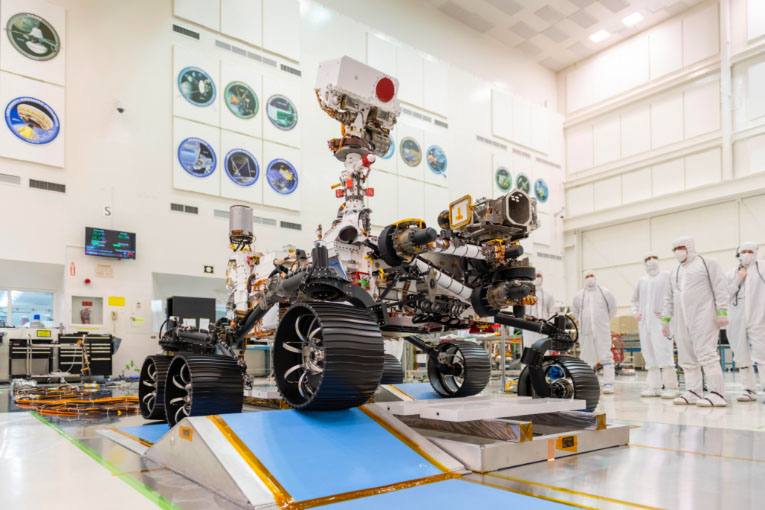 Perseverance also has a six-wheel rocker-bogie design derived from earlier NASA Mars rovers that helps to maintain a relatively constant weight on each of the roverâs wheels and minimizes tilt. The wheels on Perseverance are slightly narrower and taller than Curiosityâs. But the wheels of both rovers are machined out of a rigid, lightweight aluminum alloy and lined with grousers â raised treads specially designed for the Martian desert. Curiosityâs have a pointed chevron pattern for climbing rocks, a design that made them more vulnerable to wheel damage. Perseveranceâs grousers are nearly straight with a gentle curve, and each wheel has twice the number of treads as Curiosityâs (48 versus 24). The wheel skin is also twice as thick as Curiosityâs. During testing, the mobility team found this improved both damage tolerance and wheel performance over rocks and sand.

Just like Curiosity, Perseverance has two main computers, or âbrainsâ: One is active at any given time, while the other serves as a backup. Both use radiation-hardened RAD750 computers, and together, theyâre referred to as Rover Compute Element A and B.

Another RAD750 serves as a third âbrain,â on Perseverance. Called the Vision Compute Element, it is equipped with a special card for analyzing images. This card has a Virtex-5 field programmable gate array (FPGA) and is the driving force behind Terrain-Relative Navigation and the Lander Vision System, which analyzes images of the landing site during descent and compares them to an onboard map to determine the roverâs position relative to the ground.

After landing, the Vision Compute Element is reprogrammed to analyze images of the Martian terrain so that the rover can autonomously navigate around obstacles more efficiently.

For more on the distinctions between Curiosity and Perseverance, read the feature story Two Rovers to Roll on Mars Again.

Find more on the roverâs science instruments in the Science section of this press kit.

The Perseverance roverâs Sample Caching System is made of three robotic components that will work in concert to collect samples of rock and regolith (broken rock and dust), seal them in sample tubes, and deposit those tubes on the surface of Mars for retrieval by a future mission.

The first robot involved with the Sample Caching System is the 7-foot-long (2-meter-long) robotic arm with its drill and instrument-laden turret. Bolted to the front of the roverâs chassis, the five-jointed arm can be manipulated so that the turret is placed in close proximity to interesting geologic features on the surface. The turret contains the coring tool: a rotary-percussive device designed to acquire rock core and regolith samples. A small tank of pressurized nitrogen can be used to blow dust and other particles off targets prior to analysis by two science instruments also located on the turret: the ultraviolet Raman spectrometer SHERLOC and the X-ray fluorescence spectrometer PIXL.

If the Perseverance science team determines rock or regolith is worthy of sampling, it will command the arm to place either a coring or regolith bit, with a sample tube inside, into the coring tool and then place the drill bit against the target. When coring, the drill â using either rotary mode (where a hole is produced using a drill bit under constant pressure) or percussive mode (where the rotary motion is supplemented with swift hammerlike blows to propel the drill bit forward) â obtains a cylindrical sample about 0.5 inches (13 millimeters) in diameter and 2.4 inches (60 millimeters) long in a sample tube in the center of the bit. This chalk-size sample amounts to an average of 0.35-0.53 ounces (10-15 grams) of Martian material. A similar process is used with the regolith bit to collect regolith samples.

After the sample is collected, the robotic arm places the tube into the second component of the Sample Caching System: the bit carousel.

The adaptive caching assembly consists of the sample handling arm, sample tube assemblies, tube seals, and processing stations for a variety of activities. When the bit carousel transfers a filled sample tube to the adaptive caching assembly, the 1.6-foot-long (0.5-meter-long) sample handling arm then moves the tube to the processing stations. The stations measure the volume and take an image of the sample, install, and activate a tube seal, and place the tube in storage. Later, when the rover reaches a suitable location, the sample handling arm retrieves the sealed tubes and drops them to the surface of Mars for retrieval by a future mission. Perseverance may also be able to store them internally and transport them to a future return missionâs lander.

In addition to these functions, the Sample Caching System must also maintain unprecedented biological cleanliness to protect the sample from possible Earth-based contamination. The combination of these two factors makes it the most complex integrated robotic subsystem ever built for Mars. 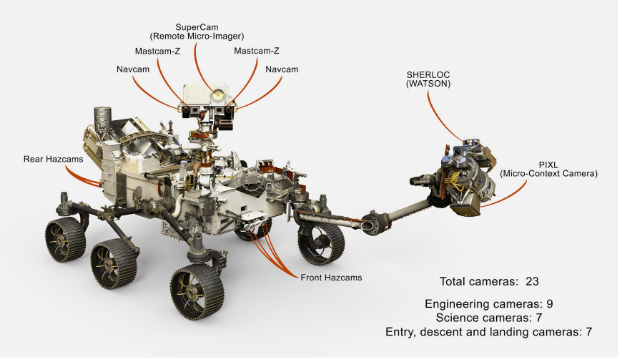 The Mars 2020 mission carries more cameras to Mars than any interplanetary mission in history, with 23 spread throughout the components of the Mars 2020 spacecraft. The Perseverance rover itself has 19 cameras that will deliver images of the landscape in breathtaking detail. Those include nine cameras for engineering; seven for science; and three for entry, descent, and landing (EDL).

Cameras for EDL are also installed on the aeroshell and descent stage. Find more information about the two cameras on the Ingenuity Mars Helicopter in the Ingenuity press kit.


Mars 2020 Cameras and Their Capabilities 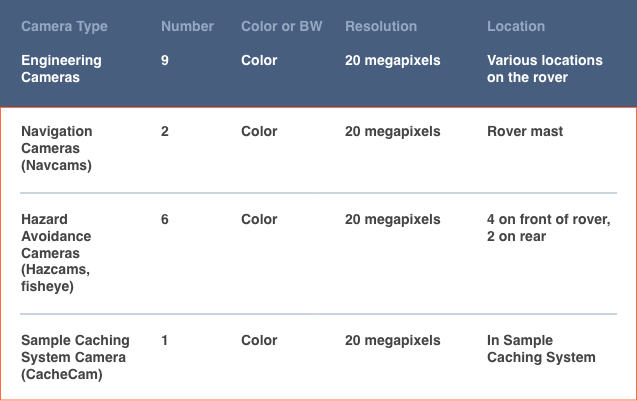 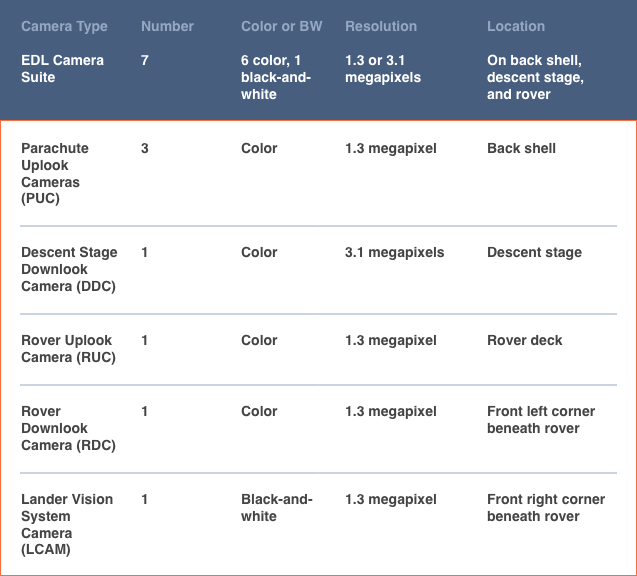 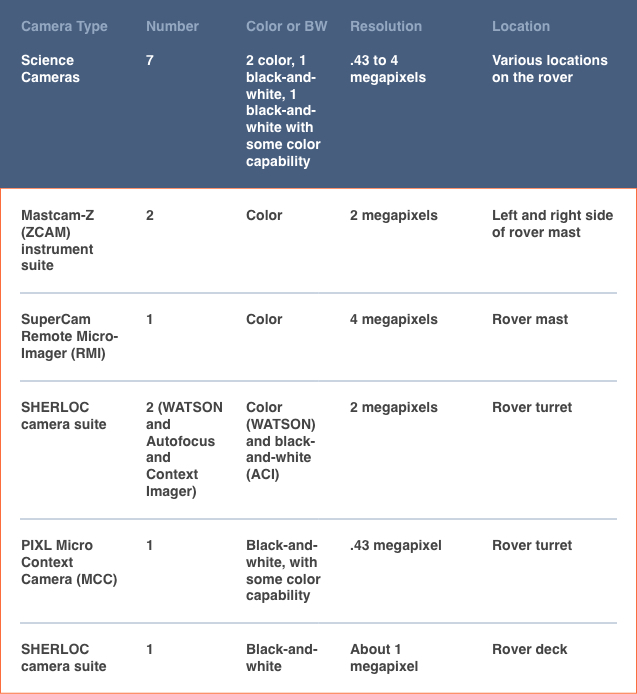 The six color, off-the-shelf cameras that capture Perseveranceâs EDL are for public engagement and for engineers to reconstruct what happened during the landing. 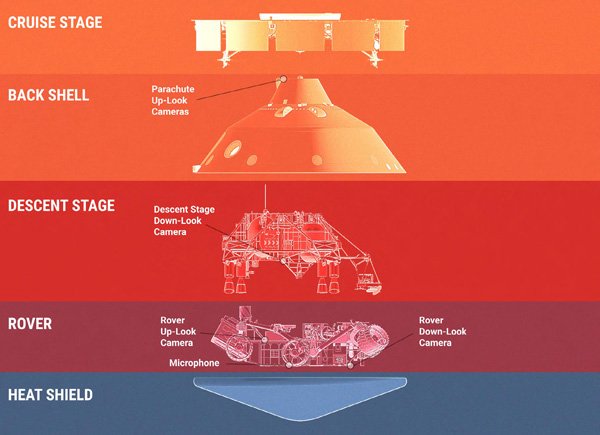 One black-and-white camera dedicated to Terrain-Relative Navigation as part of the Lander Vision System plays a key role in the landing itself. (Find more details about its role in the Entry, Descent, and Landing section of this press kit.) 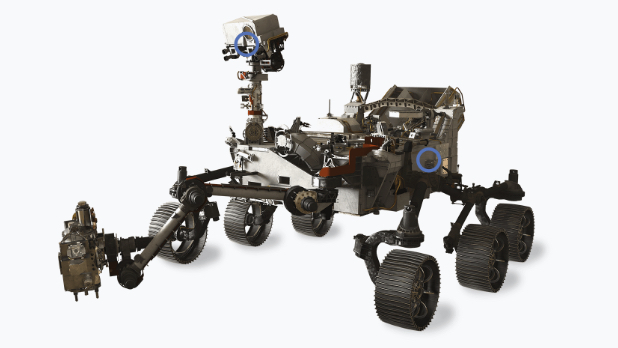 The Perseverance rover also has two microphones: one to record the sounds of a Mars landing for the first time, and one that is part of the SuperCam science instrument.

The EDL microphone is a commercial, off-the-shelf part on an aft-side panel. It is intended for public engagement and later EDL analysis, but there is no guarantee what exactly it will record. Wind and engine sounds could overwhelm the microphone. But the roverâs team is hoping to capture some of the following:

Depending on how the microphone works after landing, it may be used to occasionally record sounds on the Martian surface.

Separately, a microphone on the SuperCam instrument on the remote sensing mast will record the sound of the instrumentâs laser zaps against the Martian surface. The sounds will help scientists understand the property of the rocks SuperCam is examining, including their hardness. SuperCamâs microphone can also can also listen to the wind.

Your Name Is on Its Way to Mars

Another special feature on the rover can be found on the aft crossbeam: a plate that contains three silicon chips stenciled with the names of approximately 10.9 million people from around the world who participated in the âSend Your Name to Marsâ online campaign from May to September 2019. The fingernail-sized chips also contain the essays of 155 finalists in NASAâs âName the Roverâ essay contest. 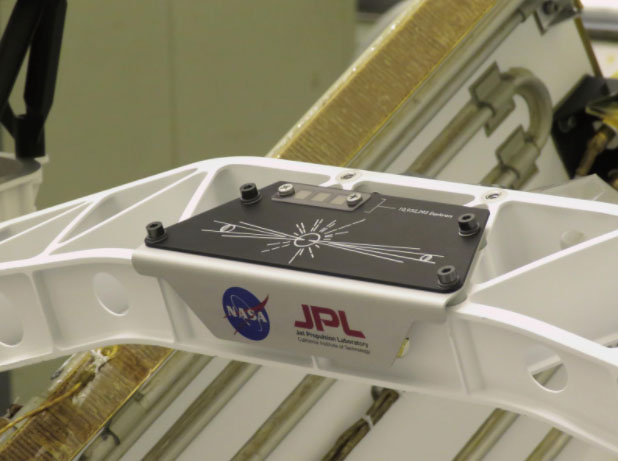 This placard commemorating NASAâs âSend Your Name to Marsâ campaign was installed on the Perseverance Mars rover on March 16, 2020, at NASAâs Kennedy Space Center in Florida. Image credit: NASA/JPL-Caltech | Full image and caption

The chips share space on the plate with a laser-etched graphic depicting Earth (the circle on the left in the image above) and Mars (the circle on the right) joined by the star that gives light to both and a Morse code message in the Sunâs rays: âExplore as one.â

The rover also features some additional elements â from practical to playful â that are part of a tradition of âfestooningâ that harks back to the early space age.