The Mars 2020 mission has two primary motivations for keeping the spacecraft biologically clean. The first, called âplanetary protection,â is to avoid harmful contamination of Mars, which could confound future searches for life. The second, referred to as âreturned sample science cleanliness,â is to limit Earth-based contamination in the samples that the mission will collect for science purposes.

The United States has obligations under the international 1967 Outer Space Treaty to explore space in a manner that avoids the harmful contamination of celestial bodies while also not adversely affecting Earthâs environment with the return of any extraterrestrial matter. To help meet these obligations, NASAâs Planetary Protection Office draws up cleanliness standards known as planetary protection requirements. Flight hardware for the Mars 2020 Perseverance mission and the Ingenuity Mars Helicopter have been designed and built to meet requirements limiting the amount of Earth-sourced biological material they carry to Mars.

NASAâs primary strategy for limiting Earth-based contamination of Mars is to be sure that all hardware going to the planet is biologically clean. 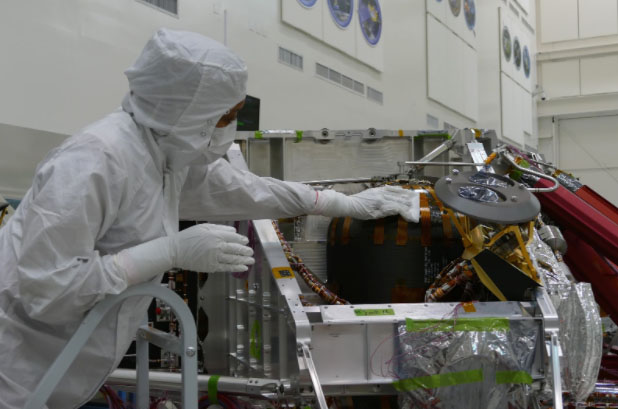 Engineers assemble spacecraft in âclean rooms,â where powerful air filters limit dust particles and where surfaces are frequently treated with strong cleaning solutions to kill and remove living microbes. Mission hardware is cleaned using techniques that have proven effective on many previous missions without damaging the spacecraft. These include wiping down the hardware with special sterile cloths and alcohol wipes, and heating durable parts to high temperatures (230 to 392 degrees Fahrenheit, or 110 to 200 degrees Celsius). The Mars 2020 Perseverance mission also used innovative new cleaning methods, such as employing hydrogen peroxide vapor to clean some spacecraft parts that couldnât be treated with other methods.

At launch, the entire payload going to Mars (the Perseverance rover, Ingenuity Mars Helicopter, cruise stage, aeroshell, and descent stage) carried fewer than 500,000 bacterial spores (dormant forms of bacteria). This is a tiny number as far as spores go and wouldnât even cover a typical smartphone camera lens. Of this number, the parts of the Mars 2020 spacecraft intended to land on Mars â including the rover, the parachute, and the descent stage â had no more than 300,000 spores in total. The rover itself was allowed to have just 41,000 spores, spread out over the vehicleâs entire surface area.

Another way to avoid transporting unwanted Earth materials to Mars is to keep hardware that does not meet cleanliness standards from going to Mars accidentally. Because only some portions of the Atlas V rocket ferrying the Mars 2020 Perseverance spacecraft into space could be cleaned as thoroughly as the spacecraft, the rocket was initially pointed along a trajectory that did not intercept Mars. After the spacecraft separated from the launch vehicleâs upper stage, Perseverance was redirected toward landing on Mars. This technique, known as âtrajectory biasing,â was intended to ensure that the launch vehicle has less than a 1 in 10,000 chance of accidentally encountering Mars for 50 years after launch.

Places on Mars where Earth organisms would be likely to replicate, or that could have a high potential for the existence of Martian life forms, are known as âspecial regions.â These include regions on Mars that could have water ice or liquid water in some form within 16 feet (5 meters) of the surface.

A key goal of Perseveranceâs mission is to seek signs of ancient microbial life, not current, or extant, life. The rover does not need to visit a special region, and its landing site â Jezero Crater â is not considered one.

Because one of the missionâs key goals is to search for signs of ancient microbial life on Mars, scientists want to be confident that any signs of ancient life they might observe in samples returned to Earth are from Mars, not Earth. Perseveranceâs Sample Caching System is therefore the cleanest set of components humankind has ever launched into space.

Because samples collected by the Perseverance rover are intended to be brought back to Earth for scientific analysis, the project must adhere to additional cleanliness standards beyond whatâs required of missions solely intended to explore the surface of Mars.

The elements of the Perseverance rover involved in sample collection are handled with extra care. They have been assembled in aseptic spaces (a clean room within a clean room), which provide the increased level of stringency for cleanliness that some sample collection hardware must meet. These parts are also thoroughly sterilized, exceeding the cleanliness standards of tools that doctors use in surgery.

The critical components of the Sample Caching System were integrated only shortly before launch at Kennedy Space Center in Florida. The sample caching elements are enclosed behind a door on the roverâs belly that will unseal and detach only after landing. An additional barrier behind this door will limit the flow of unwanted material into the parts that will touch the samples and should remain clean.

Mission teams also identified and kept track of any known materials that remained on the spacecraft after thorough cleaning. This helps maintain a list of whatâs known to be on board before the sample tubes left Earth, which can be compared with future measurements of the samples. Perseveranceâs sampling system also carries âwitnessâ tubes that record the state of the environment within the sampling system, including any terrestrial contamination that may have been on the rover before it left Earth and remains on board after touchdown on Mars.

This approach should result in the most pristine, well-documented planetary samples ever obtained that are ready for imaging and analysis on Earth, where scientific specialists from around the world can apply the full breadth of terrestrial laboratory capabilities.