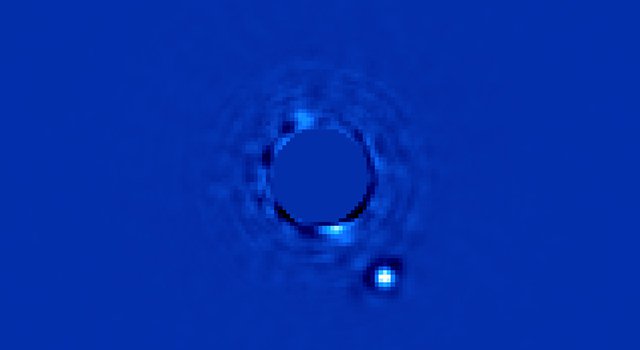 This image taken by the Gemini Planet Imager (GPI) shows a planet orbiting the star Beta Pictoris. In addition to the image, the GPI obtains spectral information from every pixel element in the field of view, allowing scientists to study the planet in great detail.› Full image and caption
Credit: Gemini/Christian Marois, NRC Canada.

The Gemini Planet Imager opens a new era of planet discovery and characterization.

After nearly a decade of development, construction and testing, the world's most advanced instrument for directly imaging and analyzing planets around other stars is pointing skyward and collecting light from distant worlds.

The instrument, called the Gemini Planet Imager (GPI), was designed, built, and optimized for imaging giant planets next to bright stars, in addition to studying dusty disks around young stars. It is the most advanced instrument of its kind to be deployed on one of the world's biggest telescopes - the 26-foot (8-meter) Gemini South telescope in Chile.

Imaging a planet next to a star is a tricky task. The planet is much fainter than its star, and also appears very close. These challenges make the act of separating the planet's light from the glare of the star difficult. NASA's Jet Propulsion Laboratory in Pasadena, Calif., contributed to the project by designing and building an ultra-precise infrared sensor to measure small distortions in starlight that might mask a planet.

"Our tasks were two-fold," said Kent Wallace, JPL's subsystem technical lead for the project. "First, keep the star centered on the instrument so that its glare is blocked as much as possible. Second, ensure the instrument itself is stable during the very long exposures required to image faint companions."

GPI detects infrared, or heat, radiation from young Jupiter-like planets in wide orbits around other stars. Those are equivalent to the giant planets in our own solar system not long after their formation. Every planet GPI sees can be studied in detail, revealing components of their atmospheres.

Although GPI was designed to look at distant planets, it can also observe objects in our solar system. Test images of Jupiter's moon Europa, for example, can allow scientists to map changes in the satellite's surface composition. The images were released today at the 223rd meeting of the American Astronomical Society in Washington.

Read the full news release from Gemini Observatory at http://www.gemini.edu/node/12113 .