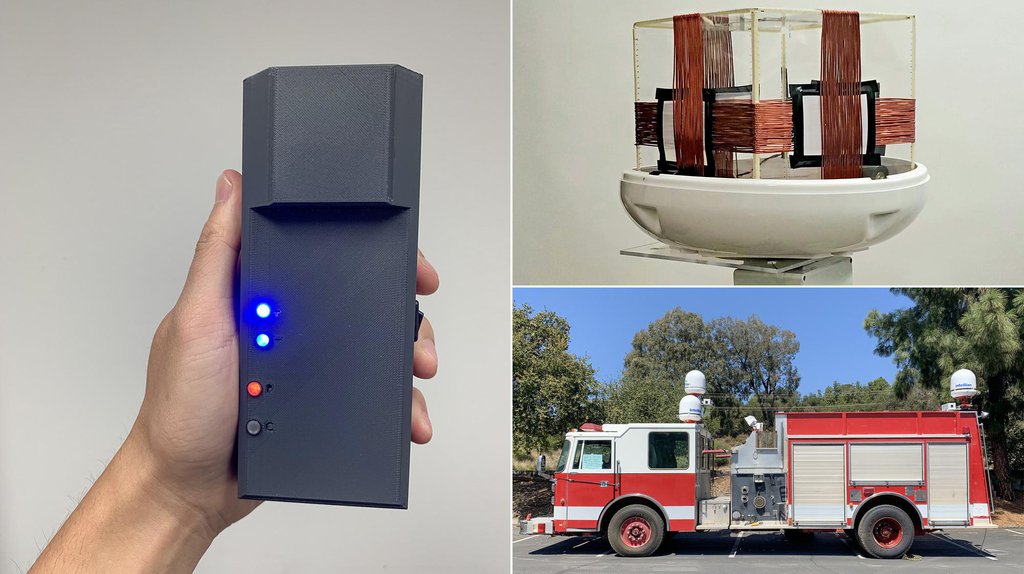 POINTER is composed of a receiver, transmitter, and base station. Clockwise from left: The receiver prototype is worn by firefighters and communicates with the transmitter coil, which was attached to an out-of-service firetruck for testing purposes.
Credit: NASA/JPL-Caltech/DHS ST
Full Image Details

When mounting a rescue inside a building, firefighters are often confronted with a fast-changing environment obscured by smoke and flames. Navigating the structure may become confusing and, should a firefighter become lost or injured, the rescuer can quickly become the one who needs rescuing.

To help mitigate those dangers, NASA’s Jet Propulsion Laboratory and the Department of Homeland Security Science and Technology Directorate (S&T) are developing POINTER, a system to locate and track firefighters inside structures when they risk their lives to save others. Short for Precision Outdoor and Indoor Navigation and Tracking for Emergency Responders, the system began taking shape in 2014, and now the technology is being matured for use by fire departments nationwide.

“Even with all of the advances made in firefighting technology, we still lose far too many firefighters each year,” said Greg Price, who leads S&T’s first responder research-and-development programs. “We want them to know that we have their backs, that we are working to give them the tools they need to ensure their own safety. POINTER is one of those life-saving solutions.”

Unlike positioning technologies such as GPS or radio-frequency identification, POINTER doesn’t use radio waves. Though radio waves offer a reliable means to determine your location in a relatively open space, they can become unpredictable if you go indoors or find yourself surrounded by high buildings. This may be a minor annoyance when trying to find the location of an appointment, but it could be a life-or-death situation when trying to locate firefighters in a burning building.

POINTER removes that unpredictability by harnessing magnetoquasistatic (MQS) fields. A type of electromagnetic field, MQS fields have been largely overlooked by researchers as a viable positioning tool because of rapid drop-off as a function of distance. But JPL senior research technologist Darmindra Arumugam helped work out a mathematical and technological framework to enable their practical application by using lower frequencies to extend the range of this technology while ensuring highly accurate location data.

“These fields are not blocked or reflected by the materials found in most buildings, as most construction materials allow quasistatic magnetic fields to easily permeate,” said Arumugam, who is also the principal investigator for POINTER.

On April 30, 2021, members of the POINTER project tested the tracking technology inside a residential structure on the Caltech campus in Southern California. The technology is being developed by NASA’s Jet Propulsion Laboratory and the Department of Homeland Security Science and Technology Directorate for use by firefighters to help track team members inside hazardous environments that may be obscured by smoke and flames.

MQS fields can be generated when low-frequency alternating electrical currents pass through a coil. Electromagnetic fields have both electric and magnetic components, but at very low frequencies and for coil structures, the magnetic component in MQS fields becomes dominant. In the quasistatic range, which can extend from a few meters to thousands of meters (determined by the frequency passing through the coil), MQS fields act much like the static magnetic field produced by the interior of our planet. This is why this field is described as “quasistatic,” which means almost stationary, or very slowly oscillating.

“This presents a significant difference to how remote wave-based position sensing works and performs,” added Arumugam. “Whereas radio waves become blocked, reflected, and attenuated by the metal, cement, and brick materials in buildings, magnetoquasistatic fields do not. They pass straight through walls, creating a means to navigate and communicate when direct line of sight is not available.”

“This is a very exciting technology that adds another dimension to firefighters’ situational awareness.”

This form of positioning technology will also have applications off Earth, added Arumugam. The MQS technique may be configured for longer ranges, filling a significant technology gap for navigation sensors for some of NASA’s space robot projects. Many of these robotic systems will need to navigate autonomously across challenging, non-line-of-sight environments and may require additional navigational abilities. MQS fields could be used by ice-penetrating robots, cave robots, and underwater robots, where traditional navigation techniques fail to operate well.

The POINTER system is composed of three parts: a receiver, transmitter, and base station. The firefighter wears the receiver, which is currently the size of a cellphone but expected to become much smaller after further development. A transmitter that can be attached to emergency vehicles outside the building generates the MQS fields, which travel through the building, pinging any receivers located inside over a range of about 230 feet (70 meters) in the current version of the system.

This range can be extended but isn’t needed in most fire-service applications. The receivers detect the fields, determine their 3D location, and then send that data back outside the building to a laptop (the base station). Visualization software shows where the firefighters are in 3D space within an accuracy of a few inches.

Not only can POINTER help firefighting teams locate team members through walls, MQS fields can also determine the orientation of the receiver. In other words, they can provide critical information about whether a first responder is standing up or lying down, moving or motionless, and which direction they are facing.

“This is a very exciting technology that adds another dimension to firefighters’ situational awareness,” said JPL’s Ed Chow, the POINTER program manager. “Firefighters can be tracked in real time and, if they become unresponsive, their team members can see if they are trapped under debris or if they are injured so a rescue can be mounted.”

In a recent demonstration, POINTER was tested in a three-level, 8,000-square-foot (750-square-meter) structure on the West Los Angeles Veterans Affairs Medical Center campus with an accuracy of less than one meter in three-dimensional space throughout the structure. Multiple POINTER devices were evaluated by members of the Department of Homeland Security Science and Technology Directorate’s First Responder Resource Group and industry partner Balboa Geolocation Inc. to ensure that they met first-responder requirements.

The POINTER team is now planning to carry out a live webcast of a technical demonstration inside a two-level single-family home in Pasadena, California, near the campus of Caltech, which manages JPL for NASA. Further field tests in a variety of firefighting scenarios are being planned through 2021, and a commercial version of POINTER will be made available to fire departments in 2022.