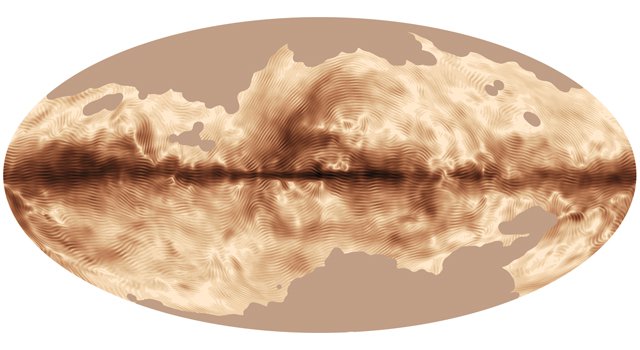 The magnetic field of our Milky Way galaxy as seen by the Planck satellite, a European Space Agency mission with significant NASA contributions. This image was compiled from the first all-sky observations of polarized light emitted by interstellar dust in the Milky Way.› Full image and caption

A new fingerprint-like map reveals the complex and sometimes tangled magnetic field of our Milky Way.

A new image from the Planck space telescope reveals the magnetic field lines of our Milky Way galaxy. The fingerprint-like map allows astronomers to study the structure of the magnetic field and better understand the process of star formation.

The image, compiled from the first all-sky observations of polarized light emitted by interstellar dust in the Milky Way, is available at:

Planck is a European Space Agency mission with significant NASA contributions. Though the mission stopped collecting data in 2013, scientists are still analyzing its huge data sets for more clues to the history of our universe.

"This is the best picture we've ever had of the magnetic field in the Milky Way over such a large part of the sky," said Charles Lawrence, the U.S. Planck project scientist for the mission at NASA's Jet Propulsion Laboratory, Pasadena, Calif.

Light can be described as a wave of electric and magnetic fields that vibrate in directions at right angles to each other and to their direction of travel. Usually, these fields can vibrate at all orientations. However, if they happen to vibrate preferentially in certain directions, the light is "polarized." This can happen, for example, when light bounces off a reflective surface like a mirror or the sea. Special filters can be used to absorb this polarized light, which is how polarized sunglasses eliminate glare.

In space, the light emitted by stars, gas and dust can also be polarized in various ways that depend on magnetic fields. Consequently, the swirls, loops and arcs in this new image trace the structure of the magnetic field in our home galaxy. Darker regions correspond to stronger polarized emission, and the striations indicate the direction of the magnetic field projected on the plane of the sky. The Planck image shows that there is large-scale organization in some parts of the galactic magnetic field.

The dark band running horizontally across the center corresponds to the galactic plane. The data also reveal variations of the polarization direction within nearby clouds of gas and dust. This can be seen in the tangled features above and below the plane, where the local magnetic field is particularly disorganized.

Planck's galactic polarization data are analyzed in a series of four papers just submitted to the journal Astronomy & Astrophysics.

Read the full story from the European Space Agency at: http://www.esa.int/

Planck is a European Space Agency mission, with significant participation from NASA. NASA's Planck Project Office is based at JPL, a division of the California Institute of Technology in Pasadena. JPL contributed mission-enabling technology for both of Planck's science instruments. European, Canadian and U.S. Planck scientists work together to analyze the Planck data.