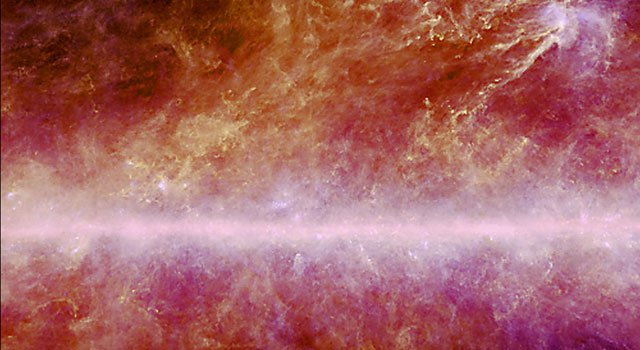 Filamentary structures in our Milky Way galaxy are apparent at large scales and small scales.› Full image and caption
Credit: ESA and the HFI Consortium

Tendrils of the coldest stuff in our galaxy can be seen in a new, large image from Planck, a mission surveying the whole sky to learn more about the birth of our universe.

Tendrils of the coldest stuff in our galaxy can be seen in a new, large image from Planck, a mission surveying the whole sky to learn more about the birth of our universe.

Planck, a European Space Agency-led mission with important participation from NASA, launched into space in May 2009 from Kourou, French Guiana. The space telescope has almost finished its first of at least four separate scans of the entire sky, a voluminous task that will be completed in early 2012.

The new image available online at http://photojournal.jpl.nasa.gov/catalog/PIA12964, highlights a swath of our Milky Way galaxy occupying about one-thirteenth of the entire sky. It shows the bright band of our galaxy's spiral disk amidst swirling clouds where gas and dust mix together and, sometimes, ignite to form new stars. The data were taken in the so-called far-infrared portion of the light spectrum, using two of nine different frequencies available on Planck.

"We've got huge amounts of data streaming down from space," said Ulf Israelsson, the NASA project manager for the mission at NASA's Jet Propulsion Laboratory, Pasadena, Calif. "The intricate process of sorting through all of it has begun."

The mission's primary objective is to map the cosmic microwave background -- relic radiation left over from the Big Bang that created our universe about 13.7 billion years ago. Planck's state-of-the-art technology will provide the most detailed information yet about the size, mass, age, geometry, composition and fate of the universe.

In addition to cosmological questions like these, the mission will address such astronomy topics as star formation and galactic structure. Its observations will be used in synergy with data from other missions, such as the Herschel Space Observatory, another ESA mission with important NASA participation, and NASA's Spitzer Space Telescope.

"Planck is the first big cosmology mission that will also have a large impact on our understanding of our galaxy, the Milky Way," said Charles Lawrence, the mission's NASA project scientist at JPL. "We can see the cold dust and gas that permeate our galaxy on very large scales, while other missions like Herschel can zoom in to see the detail."

Planck is scheduled to release a first batch of astronomy data, called the Early Release Compact Source Catalog, in Jan. 2011. Cosmology results on the first two years' worth of data are expected to be released in Dec. 2012.

Planck is a European Space Agency mission, with significant participation from NASA. NASA's Planck Project Office is based at JPL. JPL contributed mission-enabling technology for both of Planck's science instruments. European, Canadian, U.S. and NASA Planck scientists will work together to analyze the Planck data. More information is online at http://www.nasa.gov/planck and http://www.esa.int/planck.