Pathfinder Leaders Take Their Place Among the Stars 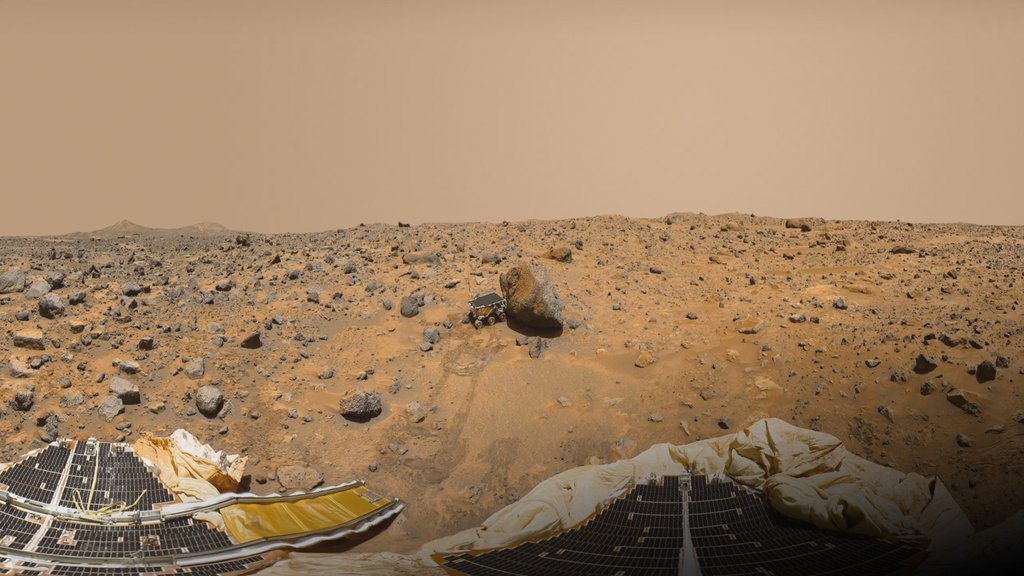 Four asteroids have been named in honor of key team members of the Mars Pathfinder mission that landed on the red planet a year ago on July 4. The new asteroid names were announced by asteroid hunter Eleanor Helin of NASA's Jet Propulsion Laboratory, Pasadena, CA.

Four asteroids have been named in honor of key team members of the Mars Pathfinder mission that landed on the red planet a year ago on July 4. The new asteroid names were announced by asteroid hunter Eleanor Helin of NASA's Jet Propulsion Laboratory, Pasadena, CA.

Mars Pathfinder team members Dr. Matthew Golombek, Brian Muirhead, Donna Shirley and Tony Spear were awarded their very own "stars" in the sky by Helin, an astronomer who has dedicated her career to the discovery and tracking of near-Earth asteroids. The recipients received honorary plaques in a ceremony hosted by JPL Director Dr. Edward Stone.

"After exploring and studying an incredible number of Mars rocks and naming them, we felt it appropriate to name some neighboring Mars rocks for these four Pathfinder Mars-keteers," Helin said.

Asteroid Donna Shirley, dubbed 5649 Shirley, which was discovered Nov. 18, 1990 at Palomar Observatory near San Diego, CA. The rock, measuring about 6 to 13 kilometers (3 to 8 miles) in diameter, crosses the orbit of Mars in its orbit inclined 21.7 degrees to the ecliptic plane on which the planets orbit the Sun. It was named in Shirley's honor for her efforts in designing the first roving vehicle on another planet, Helin said. The asteroid is currently setting in the west at about magnitude 17.5.

Asteroid Tony Spear is a fast-moving body, about 5 to 12 kilometers (3 to 7 miles) in diameter, or roughly the same size as the Chixculub asteroid which is believed to have plummeted to Earth and wiped out the dinosaurs 65 million years ago. In a highly inclined orbit of 21.2 degrees to the ecliptic plane, Spear's namesake asteroid "gives us good reason to pray that it doesn't come too close to Earth in the near future," Helin said.

Golombek's stellar keepsake, 6456 Golombek, is 2 to 4 kilometers (1 to 2.5 miles) in diameter, traveling in a 3.2-year orbit around the Sun. With a brightness at a current magnitude of 15.9, this chunk of rock is one of the larger near-Earth asteroids in the list of known Earth- approaching bodies. Its closest approach is well inside the orbit of Mars. Eventually, it could possibly cross the path of Earth's orbit.

Asteroid Muirhead is another Mars-crossing asteroid, a mountain-sized, 5- to 9- kilometer-diameter (about 3- to 6-mile) body that travels in a highly inclined, eccentric orbit.

JPL's asteroid tracking project, known as the Near-Earth Asteroid Tracking (NEAT) system, has stepped up work in the field of near-Earth object detection and cataloging with additional funding from its NASA sponsor within the Office of Space Science in Washington, DC.

With a powerful new real-time analysis system, development of two new charge-coupled device (CCD) cameras and longer observational runs each month, NEAT will be able to double the amount of nightly sky coverage and number of discoveries in the near future.