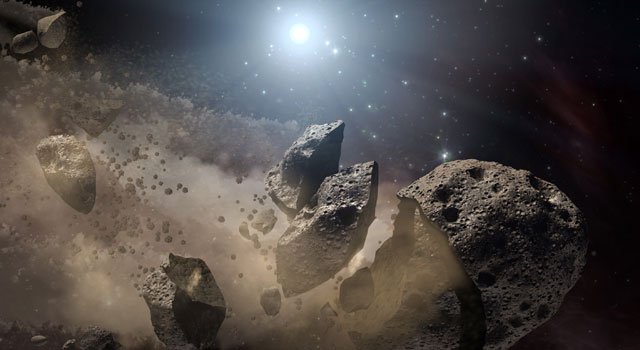 Scientists think that a giant asteroid, which broke up long ago in the main asteroid belt between Mars and Jupiter, eventually made its way to Earth and led to the extinction of the dinosaurs. This artist's concept shows a broken-up asteroid.› Full image and caption
Credit: NASA/JPL-Caltech

The family of asteroids some believed was responsible for the demise of the dinosaurs is not likely the culprit according to new observations.

PASADENA, Calif. -- Observations from NASA's Wide-field Infrared Survey Explorer (WISE) mission indicate the family of asteroids some believed was responsible for the demise of the dinosaurs is not likely the culprit, keeping open the case on one of Earth's greatest mysteries.

While scientists are confident a large asteroid crashed into Earth approximately 65 million years ago, leading to the extinction of dinosaurs and some other life forms on our planet, they do not know exactly where the asteroid came from or how it made its way to Earth. A 2007 study using visible-light data from ground-based telescopes first suggested the remnant of a huge asteroid, known as Baptistina, as a possible suspect.

According to that theory, Baptistina crashed into another asteroid in the main belt between Mars and Jupiter about 160 million years ago. The collision sent shattered pieces as big as mountains flying. One of those pieces was believed to have impacted Earth, causing the dinosaurs' extinction.

Since this scenario was first proposed, evidence developed that the so-called Baptistina family of asteroids was not the responsible party. With the new infrared observations from WISE, astronomers say Baptistina may finally be ruled out.

"As a result of the WISE science team's investigation, the demise of the dinosaurs remains in the cold case files," said Lindley Johnson, program executive for the Near Earth Object (NEO) Observation Program at NASA Headquarters in Washington. "The original calculations with visible light estimated the size and reflectivity of the Baptistina family members, leading to estimates of their age, but we now know those estimates were off. With infrared light, WISE was able to get a more accurate estimate, which throws the timing of the Baptistina theory into question."

WISE surveyed the entire celestial sky twice in infrared light from January 2010 to February 2011. The asteroid-hunting portion of the mission, called NEOWISE, used the data to catalogue more than 157,000 asteroids in the main belt and discovered more than 33,000 new ones.

Visible light reflects off an asteroid. Without knowing how reflective the surface of the asteroid is, it's hard to accurately establish size. Infrared observations allow a more accurate size estimate. They detect infrared light coming from the asteroid itself, which is related to the body's temperature and size. Once the size is known, the object's reflectivity can be re-calculated by combining infrared with visible-light data.

The NEOWISE team measured the reflectivity and the size of about 120,000 asteroids in the main belt, including 1,056 members of the Baptistina family. The scientists calculated the original parent Baptistina asteroid actually broke up closer to 80 million years ago, half as long as originally proposed.

This calculation was possible because the size and reflectivity of the asteroid family members indicate how much time would have been required to reach their current locations -- larger asteroids would not disperse in their orbits as fast as smaller ones. The results revealed a chunk of the original Baptistina asteroid needed to hit Earth in less time than previously believed, in just about 15 million years, to cause the extinction of the dinosaurs.

"This doesn't give the remnants from the collision very much time to move into a resonance spot, and get flung down to Earth 65 million years ago," said Amy Mainzer, a co-author of a new study appearing in the Astrophysical Journal and the principal investigator of NEOWISE at NASA's Jet Propulsion Laboratory (JPL) in Pasadena. Calif. "This process is thought to normally take many tens of millions of years." Resonances are areas in the main belt where gravity nudges from Jupiter and Saturn can act like a pinball machine to fling asteroids out of the main belt and into the region near Earth.

The asteroid family that produced the dinosaur-killing asteroid remains at large. Evidence that a 10-kilometer (about 6.2-mile) asteroid impacted Earth 65 million years ago includes a huge, crater-shaped structure in the Gulf of Mexico and rare minerals in the fossil record, which are common in meteorites but seldom found in Earth's crust. In addition to the Baptistina results, the NEOWISE study shows various main belt asteroid families have similar reflective properties. The team hopes to use NEOWISE data to disentangle families that overlap and trace their histories.

"We are working on creating an asteroid family tree of sorts," said Joseph Masiero, the lead author of the study. "We are starting to refine our picture of how the asteroids in the main belt smashed together and mixed up."

JPL manages and operated WISE for NASA's Science Mission Directorate. The spacecraft was put into hibernation mode after it scanned the entire sky twice, completing its main objectives. The principal investigator, astronomer Edward Wright, is at UCLA. The mission was selected competitively under NASA's Explorers Program managed by the agency's Goddard Space Flight Center in Greenbelt, Md. The science instrument was built by the Space Dynamics Laboratory in Logan. The spacecraft was built by Ball Aerospace & Technologies Corp. in Boulder, Colo. Science operations and data processing take place at the Infrared Processing and Analysis Center at the California Institute of Technology in Pasadena. Caltech manages JPL for NASA.