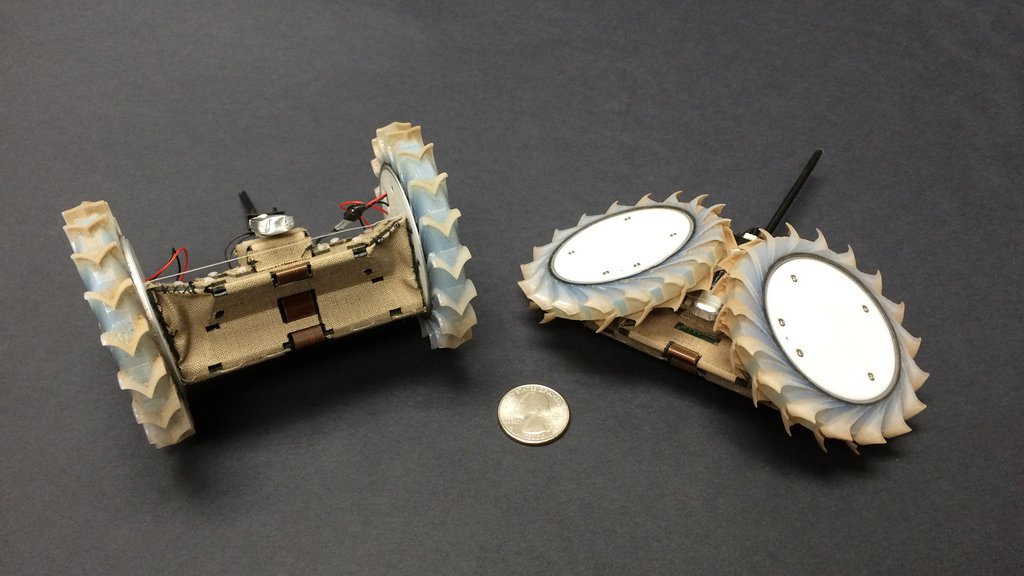 Pop-Up Flat Folding Explorer Robot (PUFFER) was inspired by an origami design. This little robot could be used as a scout for larger rovers, going places that would be risky or hard to reach.
Credit: NASA/JPL-Caltech. 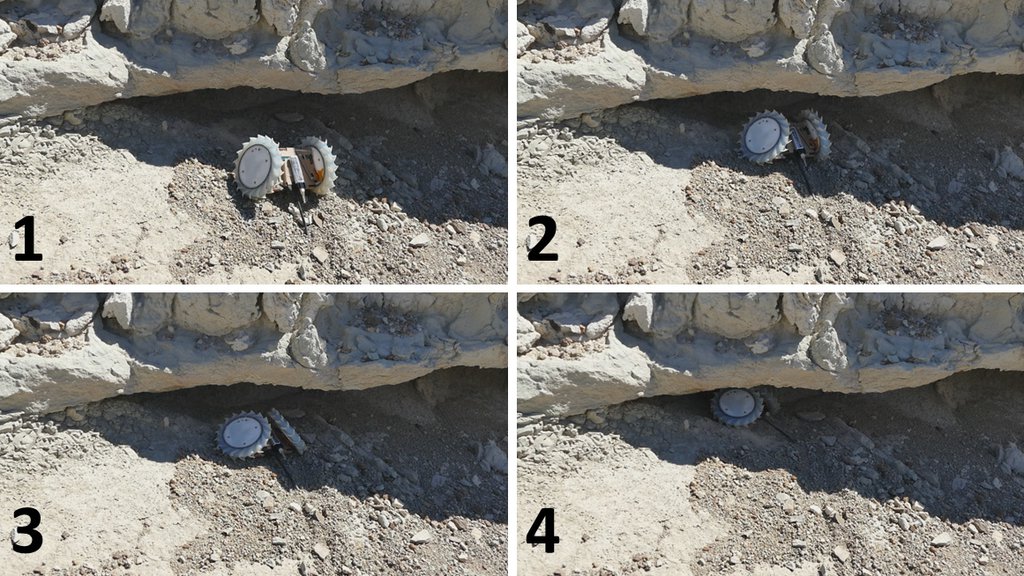 PUFFER crawls under a ledge during field testing. The advantage of its small size and foldable body is that the bot can wedge itself into small spaces. That could be useful on the rugged terrain of other planets.
Credit: NASA/JPL-Caltech. 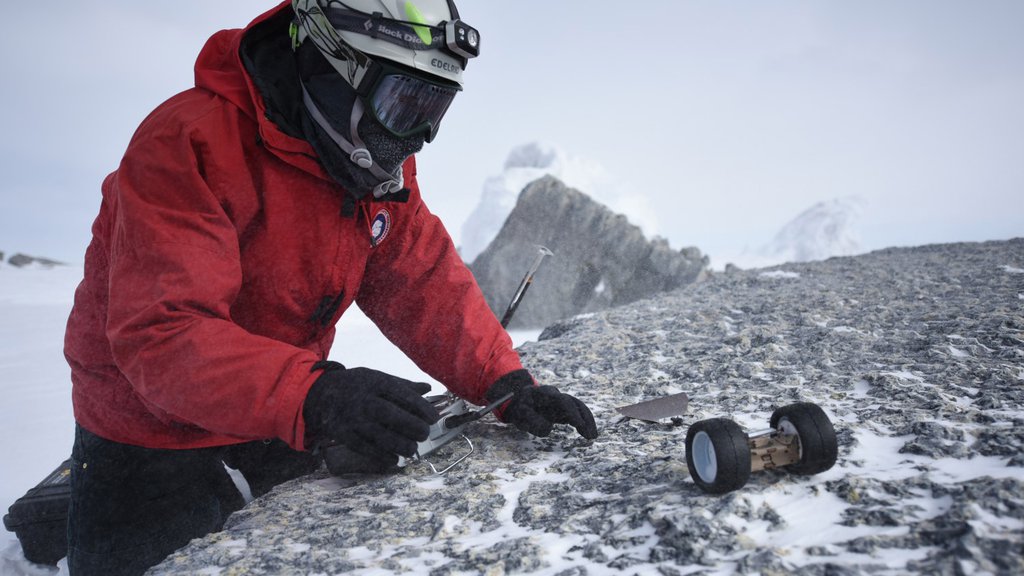 PUFFER was outfitted for field testing in snow during a recent trip to Antarctica's Mt. Erebus.
Credit: Dylan Taylor

JPL's PUFFER is a scout robot that can flatten itself to crawl into tight spaces.

The next rovers to explore another planet might bring along a scout.

The Pop-Up Flat Folding Explorer Robot (PUFFER) in development at NASA's Jet Propulsion Laboratory in Pasadena, California, was inspired by origami. Its lightweight design is capable of flattening itself, tucking in its wheels and crawling into places rovers can't fit.

Over the past year and a half, PUFFER has been tested in a range of rugged terrains, from the Mojave Desert in California to the snowy hills of Antarctica. The idea is to explore areas that might be too risky for a full-fledged rover to go, such as steep slopes or behind sand dunes.

It's designed to skitter up 45-degree slopes, investigate overhangs and even drop into pits or craters. PUFFER is meant to be the hardy assistant to a larger robot companion: several of the microbots can be flattened like cards and stacked one on top of the other.

Then, they can be flicked out, popped up and begin exploring.

"They can do parallel science with a rover, so you can increase the amount you're doing in a day," said Jaakko Karras, PUFFER's project manager at JPL. "We can see these being used in hard-to-reach locations -- squeezing under ledges, for example."

PUFFER's creators at JPL hope to see the bot rolling across the sands of Mars someday. But they imagine it could be used by scientists right here on Earth, as well.

Carolyn Parcheta, a JPL scientist who uses robots to explore volcanoes, offered guidance on PUFFER's science instruments. She said the use of backpack-ready bots has enormous potential for fields like geology.

"Having something that's as portable as a compass or a rock hammer means you can do science on the fly," she said.

PUFFER's body was originated by Karras, who was experimenting with origami designs. While he was a grad student at UC Berkeley's Biomimetic Millisystem Lab, he worked on developing robotics based on natural forms, like animal and insect movement.

The PUFFER team substituted paper with a printed circuit board -- the same thing inside of your smartphone. That allowed them to incorporate more electronics, including control and rudimentary instruments.

"The circuit board includes both the electronics and the body, which allows it to be a lot more compact," said Christine Fuller, a JPL mechanical engineer who worked on PUFFER's structure and tested it for reliability. "There are no mounting fasteners or other parts to deal with. Everything is integrated to begin with."

JPL's Kalind Carpenter, who specializes in robotic mobility, made four wheels for the folding bot on a 3-D printer. Their first prototype was little more than rolling origami, but it quickly grew more complex.

The wheels evolved, going from four to two, and gaining treads that allow it to climb inclines. They can also be folded over the main body, allowing PUFFER to crawl. A tail was added for stabilization. Solar panels on PUFFER's belly allow it to flip over and recharge in the sun.

The team partnered with the Biomimetic Millisystems Lab, which developed a "skittering walk" that keeps the bot inching forward, one wheel at a time, without slipping. A company called Distant Focus Corporation, Champaign, Illinois, provided a high-resolution microimager sensitive enough to see objects that are just 10 microns in size -- a fraction of a diameter of a human hair.

Before long, PUFFER was ready for a test drive.

From the Mojave to Mars

Once they had a functional prototype, the JPL team took PUFFER out for field testing. In Rainbow Basin, California, the bot clambered over sedimentary rock slopes and under overhangs.

That terrain serves as an analog to Martian landscapes. On Mars, overhangs could be sheltering organic molecules from harmful radiation. Darkly colored Martian slopes, which are of interest to scientists, are another potential target.

On a level dirt path, PUFFER can drive about 2,050 feet (625 meters) on one battery charge. That could fluctuate a bit depending on how much any onboard instruments are used.

Besides desert conditions, PUFFER has been outfitted for snow. Carpenter designed bigger wheels and a flat fishtail to help it traverse wintry terrain. So far, it's been tested at a ski resort in Grand Junction, Colorado; Big Bear, California; and on Mt. Erebus, an active volcano in Antarctica.

One of PUFFER's more recent field tests wasn't particularly challenging, but can still be counted as a success: the Consumer Electronics Show. On a convention center floor in Las Vegas, it drew crowds of delighted technology fans.

The next step is making PUFFER a scientist. The JPL team is looking at adding a number of instruments that would allow it to sample water for organic material, or a spectrometer to study the chemical makeup of its environment.

It's also getting bigger. Future designs might be as large as a breadbox, sacrificing its microbot size for added robustness.

Most exciting of all would be making PUFFER smarter. Right now, it runs off Bluetooth and can be controlled remotely. But Carpenter said they'd like to add autonomy, allowing a swarm of PUFFERs to conduct science as a mobile team.

"If Curiosity had a stack of PUFFERs on board, each of them could go to separate spots, and the rover would just go to the most interesting one," Carpenter said.

The team is hopeful PUFFER could end up on a future planetary mission. It already includes many Mars-compatible materials in its construction, including heritage technology from the Viking, Pathfinder and Phoenix missions.

For example, PUFFER's body is wrapped in Nomex, a strong textile used in the air bags that cushioned NASA's Spirit and Opportunity rovers when they touched down on Mars. Nomex is also used by firefighters to repel heat, meaning PUFFER could survive punishing high temperatures. A company called Pioneer Circuits, Santa Ana, California, helped integrate the Nomex into the folding circuit boards.

"Small robotic explorers like PUFFER could change the way we do science on Mars," Karras said. "Like Sojourner before it, we think it's an exciting advance in robotic design."

The PUFFER project is a Game Changing Development (GCD) program. The project is managed by JPL. The GCD program investigates ideas and approaches that could solve significant technological problems and revolutionize future space endeavors. GCD is part of NASA's Space Technology Mission Directorate.