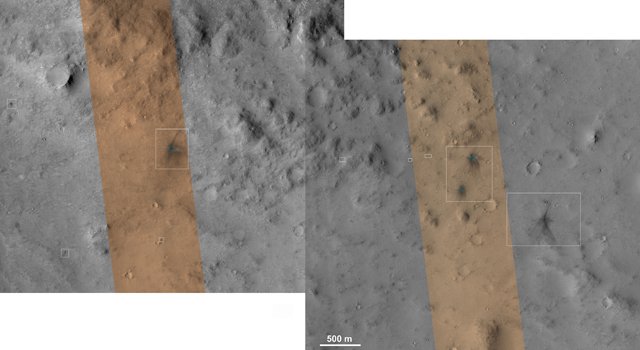 These images from the NASA Mars Reconnaissance Orbiter show several impact scars on Mars made by pieces of the NASA Mars Science Laboratory spacecraft that the spacecraft shed just before entering the Martian atmosphere.› Full image and caption
Credit: NASA/JPL-Caltech/Univ. of Arizona

Pictures from NASA's Mars Reconnaissance Orbiter show scars on the surface of the Red Planet where discarded pieces of the Mars Science Laboratory spacecraft hit the ground.

During the 10 minutes before the NASA Mars Science Laboratory spacecraft entered the Martian atmosphere to deliver the rover Curiosity to the surface, the spacecraft shed its cruise stage, which had performed vital functions during the flight from Earth, and then jettisoned two 165-pound (75-kilogram) blocks of tungsten to gain aerodynamic lift.

Cameras on the NASA Mars Reconnaissance Orbiter have imaged impact scars where the tungsten blocks and the broken-apart cruise stage hit about 50 miles (80 kilometers) west of where Curiosity landed on Aug. 5, 2012, PDT (Aug. 6, UTC).

The images from the orbiter's High Resolution Imaging Science Experiment (HiRISE) camera are online at http://www.jpl.nasa.gov/spaceimages/details.php?id=PIA16456 .

Although hundreds of new impact sites have been imaged on Mars, researchers do not get independent information about the initial size, velocity, density, strength, or impact angle of the objects. For the Mars Science Laboratory hardware, such information is known, so study of this impact field will provide information on impact processes and Mars surface and atmospheric properties.

The Mars Reconnaissance Orbiter has been examining Mars with six science instruments since 2006. Now in an extended mission, the orbiter continues to provide insights about the planet's ancient environments and about how processes such as wind, meteorite impacts and seasonal frosts are continuing to affect the Martian surface today. This mission has returned more data about Mars than all other orbital and surface missions combined.

More than 27,000 images taken by HiRISE are available for viewing on the instrument team's website: http://hirise.lpl.arizona.edu . Each observation by this telescopic camera covers several square miles, or square kilometers, and can reveal features as small as a desk.

For more information about the Mars Reconnaissance Orbiter, see: www.nasa.gov/mro .