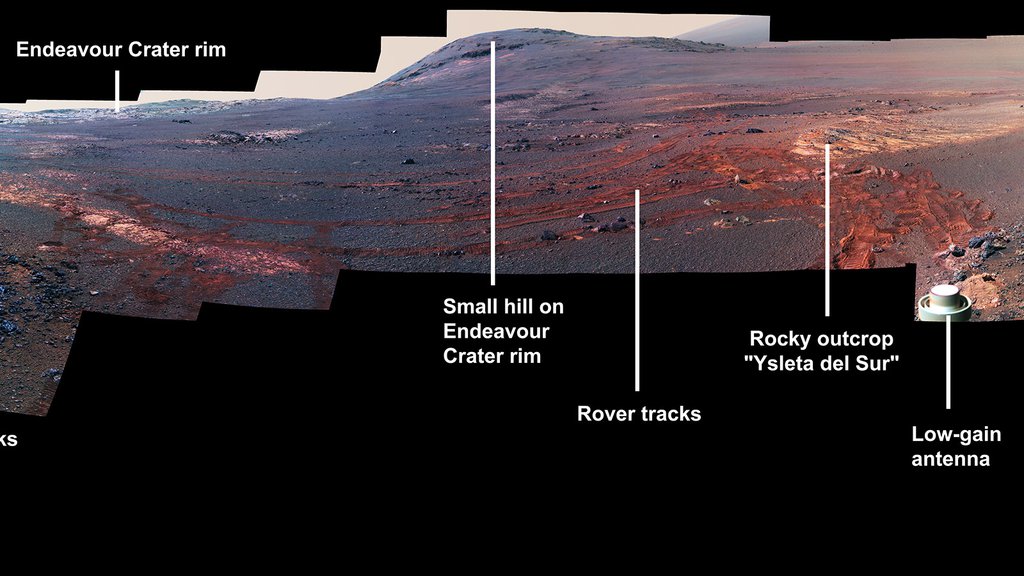 This image is a cropped version of the last 360-degree panorama taken by the Opportunity rover's Panoramic Camera (Pancam) from May 13 through June 10, 2018. The view is presented in false color to make some differences between materials easier to see.› Full image and caption
Credit: NASA/JPL-Caltech/Cornell/ASU 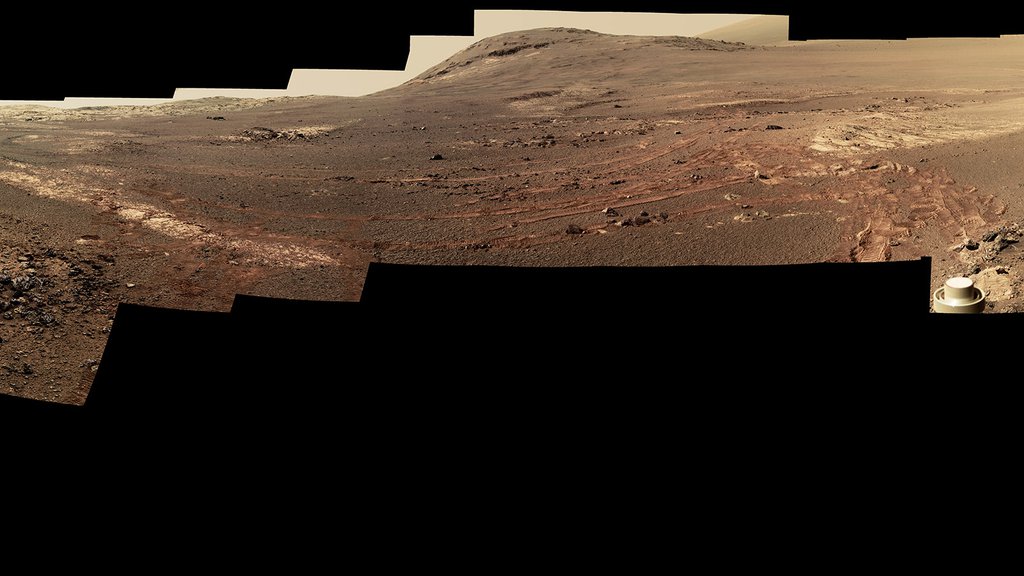 This image is an edited version of the last 360-degree panorama taken by the Opportunity rover's Pancam from May 13 through June 10, 2018. The version of the scene is presented in approximate true color.› Full image and caption
Credit: NASA/JPL-Caltech/Cornell/ASU 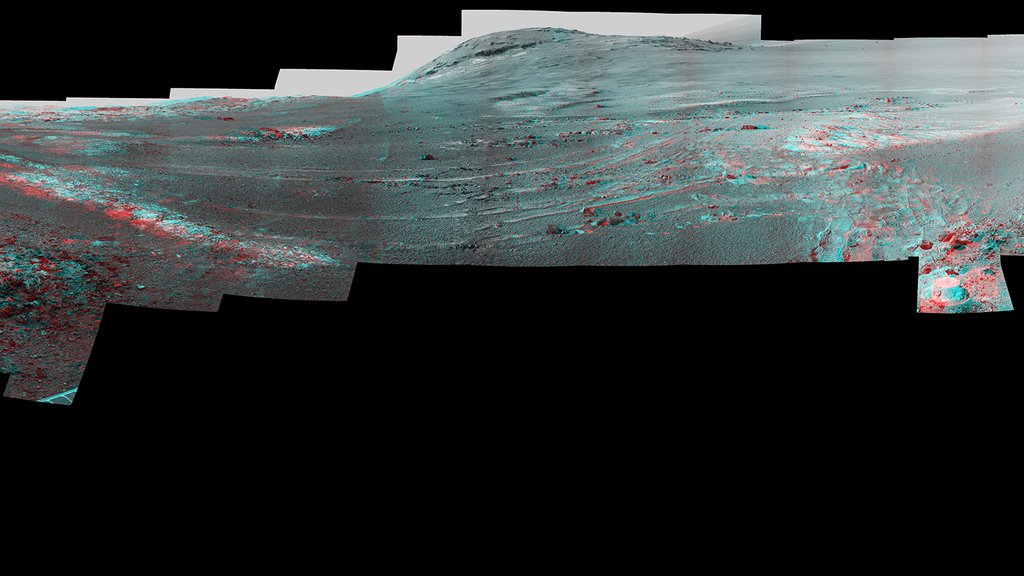 This image is a cropped version of the last 360-degree panorama taken by the Opportunity rover's Pancam from May 13 through June 10, 2018. The panorama appears in 3D when seen through blue-red glasses with the red lens on the left.› Full image and caption
Credit: NASA/JPL-Caltech/Cornell/ASU 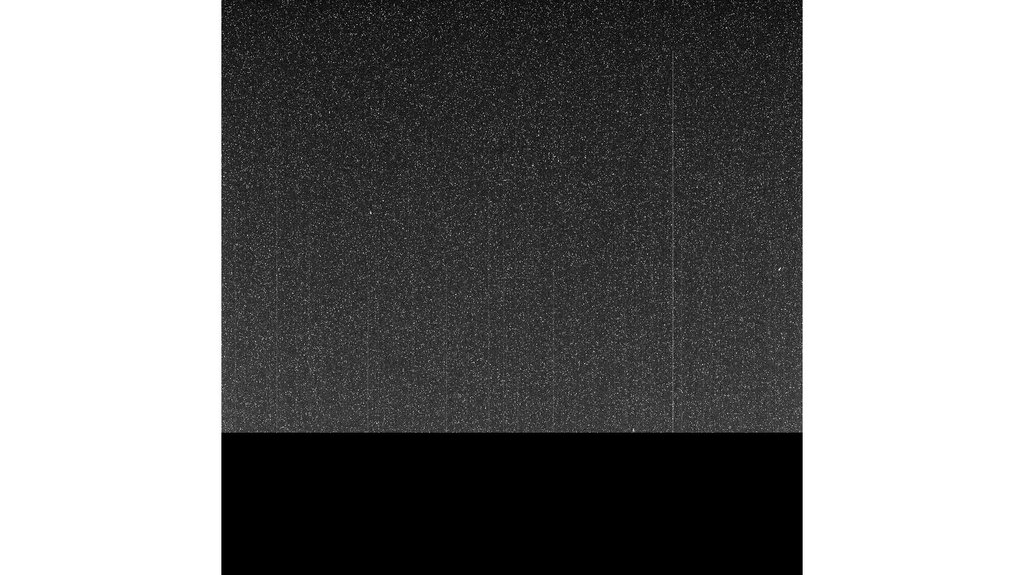 Taken on June 10, 2018 (the 5,111th Martian day, or sol, of the mission) this "noisy," incomplete image was the last data NASA's Opportunity rover sent back from Mars.› Full image and caption
Credit: NASA/JPL-Caltech/Cornell/ASU 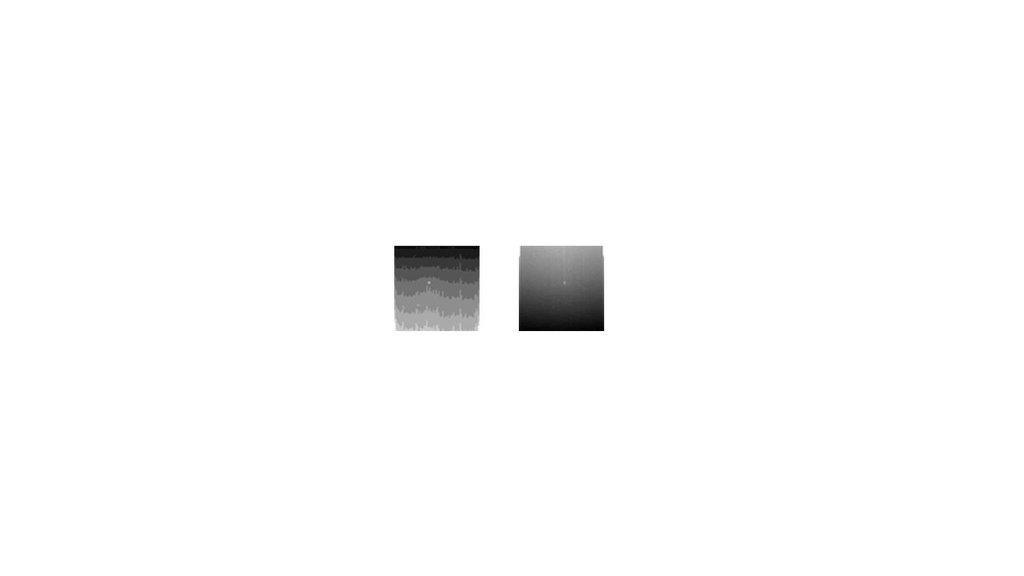 These two thumbnail images, with the ghostly dot of a faint Sun near the middle of each, are the last images NASA's Opportunity rover took on Mars.› Full image and caption
Credit: NASA/JPL-Caltech/Cornell/ASU

NASA declared the record-setting rover's mission complete on Feb. 13, 2019, but the final image from the rover has just been processed.

Over 29 days last spring, NASA's Mars Exploration Rover Opportunity documented this 360-degree panorama from multiple images taken at what would become its final resting spot in Perseverance Valley. Located on the inner slope of the western rim of Endeavour Crater, Perseverance Valley is a system of shallow troughs descending eastward about the length of two football fields from the crest of Endeavour's rim to its floor.

"This final panorama embodies what made our Opportunity rover such a remarkable mission of exploration and discovery," said Opportunity project manager John Callas of NASA's Jet Propulsion Laboratory in Pasadena, California. "To the right of center you can see the rim of Endeavor Crater rising in the distance. Just to the left of that, rover tracks begin their descent from over the horizon and weave their way down to geologic features that our scientists wanted to examine up close. And to the far right and left are the bottom of Perseverance Valley and the floor of Endeavour crater, pristine and unexplored, waiting for visits from future explorers."

The trailblazing mission ended after nearly 15 years of exploring the surface of Mars, but its legacy will live on. Opportunity's scientific discoveries contributed to our unprecedented understanding of the planet's geology and environment, laying the groundwork for future robotic and human missions to the Red Planet.

The panorama is composed of 354 individual images provided by the rover's Panoramic Camera (Pancam) from May 13 through June 10, or sols (Martian days) 5,084 through 5,111. This view combines images taken through three different Pancam filters. The filters admit light centered on wavelengths of 753 nanometers (near-infrared), 535 nanometers (green) and 432 nanometers (violet).

A few frames (bottom left) remain black and white, as the solar-powered rover did not have the time to record those locations using the green and violet filters before a severe Mars-wide dust storm swept in on June 2018.

The gallery includes the last images Opportunity obtained during its mission (black-and-white thumbnail images from the Pancam that were used to determine how opaque the sky was on its last day) and also the last piece of data the rover transmitted (a "noisy," incomplete full-frame image of a darkened sky).

After eight months of effort and sending more than a thousand commands in an attempt to restore contact with the rover, NASA declared Opportunity's mission complete on Feb. 13, 2019.

JPL, a division of the California Institute of Technology in Pasadena, managed the Mars Exploration Rover Project for NASA's Science Mission Directorate in Washington.

For more information about the agency's Mars Exploration program, visit: