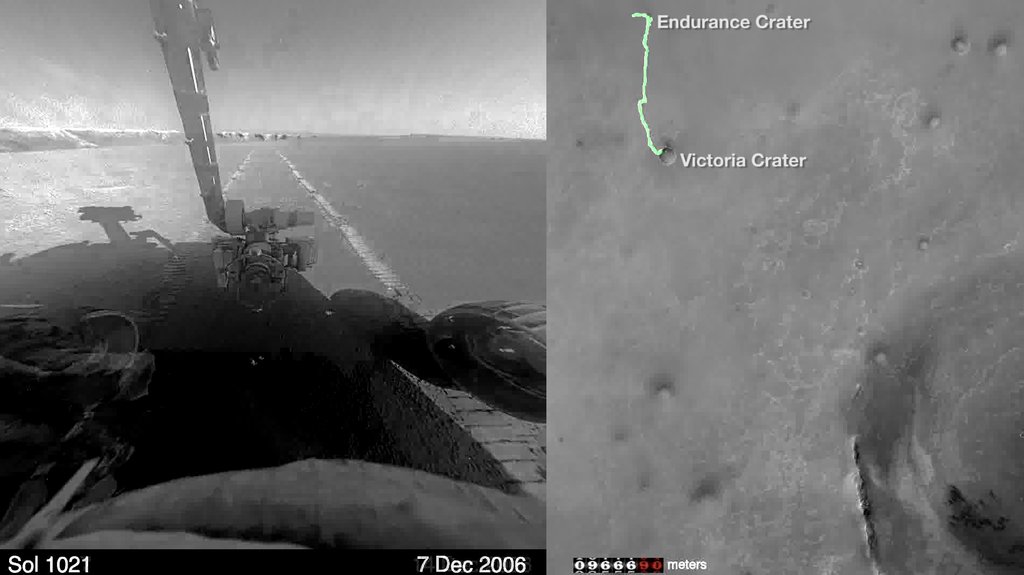 Road trip! This compilation of images from hazard-avoidance cameras on NASA's Mars Exploration Rover Opportunity between January 2004 and April 2015 shows the rover's-eye-view of the Martian marathon covering 26.2 miles(42.2 kilometers) from its landing location. A map of the rover's path is on the right.

NASA's Opportunity rover has resumed driving after Mars emerged from behind the sun. Plans call for the rover to examine sites in Marathon Valley during the upcoming winter.

› Scientists and engineers plan to use NASA's Mars rover Opportunity throughout the upcoming Martian winter to examine exposures of clay minerals.

› First, the rover is studying a band of reddish material at the edge of "Spirit of St. Louis Crater."

Operators of NASA's Mars Exploration Rover Opportunity plan to drive the rover into a valley this month where Opportunity will be active through the long-lived rover's seventh Martian winter, examining outcrops that contain clay minerals.

Opportunity resumed driving on June 27 after about three weeks of reduced activity around Mars solar conjuntion, when the sun's position between Earth and Mars disrupts communication. The rover is operating in a mode that does not store any science data overnight. It transmits the data the same day they're collected.

The rover is working about half a football field's length away from entering the western end of "Marathon Valley," a notch in the raised rim of Endeavour Crater, which is about 14 miles (22 kilometers) in diameter. Opportunity landed on Mars in 2004 and has been studying the rim of Endeavour since 2011.

Engineers and scientists operating Opportunity have chosen Marathon Valley as the location for the solar-powered rover to spend several months, starting in August, to take advantage of a sun-facing slope loaded with potential science targets.

The team plans to drive Opportunity this month to sites on the valley's northern side, where the slope faces south. Right now, it is early autumn in the southern hemisphere of Mars. The shortest day of the hemisphere's winter won't come until January. As the sun's daily track across the northern sky gets shorter, the north-facing slope on the southern side of the valley will offer the advantage of tilting the rover's solar panels toward the sun, to boost the amount of electrical energy production each day.

First, though, the mission's initial activities for a few days after emerging from the solar conjunction period are to examine rocks in and near a band of reddish material at the northern edge of an elongated crater called "Spirit of St. Louis." During the driving moratorium, the rover used the alpha particle X-ray spectrometer on the end of its robotic arm to assess the chemical composition of a target in this red zone.

The rover is operating in a mode that avoids use of the type of onboard memory -- non-volatile flash memory -- that can retain data even when power is turned off overnight. It is using random-access memory, which retains data while power is on. The rover operated productively in this mode for several months in 2014. A reformatting of the flash memory earlier this year temporarily slowed the frequency of flash-induced computer resets, but the reset occurrences increased again later in the spring.

"Opportunity can continue to accomplish science goals in this mode," said Opportunity Project Manager John Callas, of NASA's Jet Propulsion Laboratory, Pasadena, California. "Each day we transmit data that we collect that day."

"Flash memory is a convenience but not a necessity for the rover," Callas said. "It's like a refrigerator that way. Without it, you couldn't save any leftovers. Any food you prepare that day you would have to either eat or throw out. Without using flash memory, Opportunty needs to send home the high-priority data the same day it collects it, and lose any lower-priority data that can't fit into the transmission."