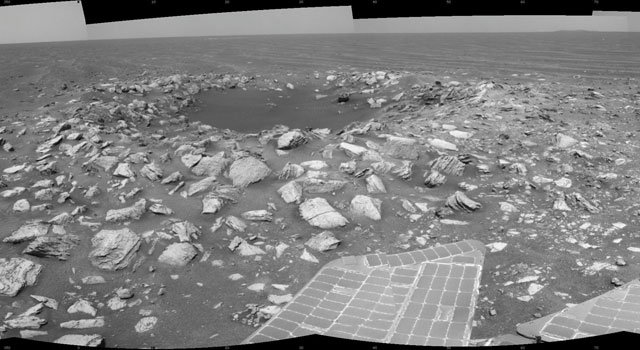 NASA's Mars Exploration Rover Opportunity used its navigation camera to take the exposures combined into this view of a wee crater, informally named "Skylab," along the rover's route. › Full image and caption

NASA's Mars Exploration Rover Opportunity used its navigation camera to take the exposures combined into this stereo view of a wee crater, informally named 'Skylab,' along the rover's route.› Full image and caption

A drive of 482 feet (146.8 meters) on June 1, 2011, took NASA's Mars Exploration Rover Opportunity past 30 kilometers (18.64 miles) in total odometry during 88 months of driving on Mars. That's 50 times the distance originally planned for the mission and more than 12 times the distance racehorses will run next week at the Belmont Stakes.

Opportunity has passed many craters on its crater-hopping tour. One of the youngest of them is "Skylab" crater, which the rover passed last month. Rocks scattered by the impact of a meteorite surround the resulting crater in a view recorded by Opportunity on May 12. The view is at http://photojournal.jpl.nasa.gov/catalog/PIA14132 , and in 3-D stereo at http://photojournal.jpl.nasa.gov/catalog/PIA14133 .

This crater, informally named after America's first space station, is only about 9 meters (30 feet) in diameter. Opportunity passed it as the rover made progress toward its long-term destination, Endeavour crater, which is about 22 kilometers (14 miles) in diameter.

The positions of the scattered rocks relative to sand ripples suggest that Skylab is young for a Martian crater. Researchers estimate it was excavated by an impact within the past 100,000 years.

Opportunity and its twin, Spirit, completed their three-month prime missions on Mars in April 2004. Both rovers continued for years of bonus, extended missions. Both have made important discoveries about wet environments on ancient Mars that may have been favorable for supporting microbial life. Spirit has not communicated with Earth since March 2010.