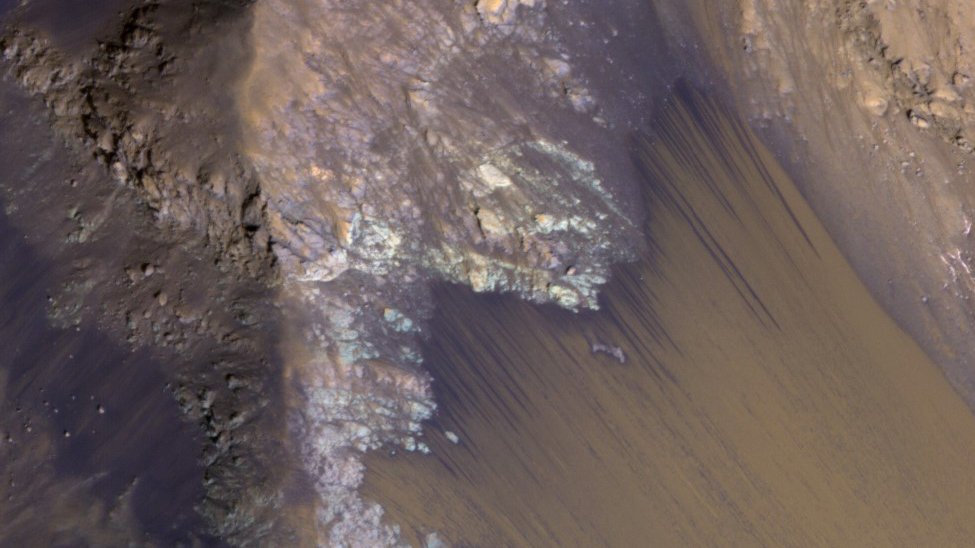 Among the many discoveries by NASA's Mars Reconnaissance Orbiter since the mission was launched on Aug. 12, 2005, are seasonal flows on some steep slopes, possibly shallow seeps of salty water. This July 21, 2015, image from the orbiter's HiRISE camera shows examples within Mars' Valles Marineris.› Full image and caption
Credit: NASA/JPL-Caltech/Univ. of Arizona

Ten years after launch, NASA's Mars Reconnaissance Orbiter has revealed the Red Planet's diversity and activity, and its work is far from over.

› Every week, MRO returns more data about Mars than the weekly total from all other active Mars missions

› It has orbited Mars 40,000 times and returned 250 terabits of data so far (as much data as in nearly four months of nonstop high-definition video)

Ten years after launch, NASA's Mars Reconnaissance Orbiter (MRO) has revealed the Red Planet's diversity and activity, returning more data about Mars every week than the weekly total from all six other active Mars missions. And its work is far from over.

The workhorse orbiter now plays a key role in NASA's Journey to Mars planning. Images from the orbiter, revealing details as small as a desk, aid the analysis of potential landing sites for the 2016 InSight lander and Mars 2020 rover. Data from the orbiter will also be used as part of NASA's newly announced process to examine and select candidate sites where humans will first explore the Martian surface in the 2030s.

An Atlas V rocket launched the orbiter on an early Florida morning from Cape Canaveral Air Force Station on Aug. 12, 2005, propelling it on a course toward Mars.

"The most crucial event after launch was orbit insertion on March 10, 2006," said JPL's Dan Johnston, MRO project manager. "The 27-minute burn of the spacecraft's main engines, necessary for orbit capture, was scheduled for completion while the spacecraft was behind Mars, so we had to wait in suspense for confirmation that it went well. It did. As planned, the initial orbit was highly elliptical. Then we had nearly five months of aerobraking -- using controlled friction of more than 400 dips into the upper fringe of the atmosphere -- to shrink the orbit to a nearly circular shape."

MRO's primary science mission began in November 2006 and lasted for one Mars year, equivalent to about two Earth years. The orbiter has used six instruments to examine Mars' surface, subsurface and atmosphere. The spacecraft has been orbiting Mars at an altitude of about 186 miles (300 kilometers) above the Red Planet, passing near the north and south poles about 12 times a day.

"Mars Reconnaissance Orbiter has found evidence of diverse watery environments on early Mars, some more habitable than others," said the mission's project scientist, Rich Zurek of NASA's Jet Propulsion Laboratory, Pasadena, California. "MRO has discovered that Mars' south polar cap holds enough buried carbon-dioxide ice to double the planet's current atmosphere if it warmed. It's caught avalanches and dust storms in action. The spacecraft's longevity has made it possible to study seasonal and longer-term changes over four Martian years. These studies document activity such as moving dunes, freshly excavated impact craters -- some which expose subsurface ice -- and mysterious strips that darken and fade with the seasons and are best explained as brine flows."

Though it has already served longer than planned, the spacecraft could remain a cornerstone of NASA's Mars Exploration Program fleet for years to come.

In addition to continuing to make its own discoveries about Mars, the mission delivers crucial support for surface-based missions. This support includes communication relay service and detailed observations of candidate landing sites for rovers and stationary landers past, present and future.

"Ten years after launch, MRO continues full science and relay operations," said Kevin Gilliland, spacecraft engineer for the mission at Lockheed Martin Space Systems, Denver. "We've kept our operations efficient. We've been able to bring back an astonishing amount of science data -- more than 250 terabits so far. Even after more than 40,000 orbits, the mission remains exciting, with new challenges such as taking close-up images of a passing comet last year and supporting next year's InSight landing."

The InSight mission will place a lander on Mars to investigate the deep interior of the Red Planet for clues about the formation and evolution of all rocky planets, including Earth. A maneuver two weeks ago altered MRO's orbit, as planned, to put it in position to provide communication support for InSight's Sept. 28, 2016, landing.

JPL, a division of the California Institute of Technology in Pasadena, manages the Mars Reconnaissance Orbiter Project for NASA's Science Mission Directorate, Washington. Lockheed Martin built the orbiter and collaborates with JPL to operate it.