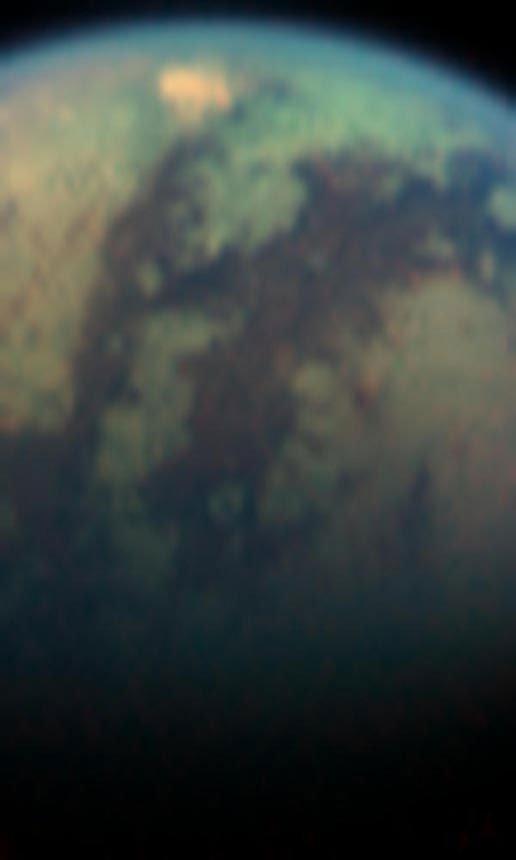 The visual and infrared mapping spectrometer instrument onboard Cassini has found an unusual bright, red spot on Titan. + Full image and caption

Saturn's moon Titan shows an unusual bright spot that has scientists mystified. The spot, approximately the size and shape of West Virginia, is just southeast of the bright region called Xanadu and is visible to multiple instruments on the Cassini spacecraft.

The 483-kilometer-wide (300-mile) region may be a "hot" spot -- an area possibly warmed by a recent asteroid impact or by a mixture of water ice and ammonia from a warm interior, oozing out of an ice volcano onto colder surrounding terrain. Other possibilities for the unusual bright spot include landscape features holding clouds in place or unusual materials on the surface.

"At first glance, I thought the feature looked strange, almost out of place," said Dr. Robert H. Brown, team leader of the Cassini visual and infrared mapping spectrometer and professor at the Lunar and Planetary Laboratory, University of Arizona, Tucson. "After thinking a bit, I speculated that it was a hot spot. In retrospect, that might not be the best hypothesis. But the spot is no less intriguing."

The Cassini spacecraft flew by Titan on March 31 and April 16. Its visual and infrared mapping spectrometer, using the longest, reddest wavelengths that the spectrometer sees, observed the spot, the brightest area ever observed on Titan.

Cassini's imaging cameras saw a bright, 550-kilometer-wide (345-mile) semi-circle at visible wavelengths at this same location on Cassini's December 2004 and February 2005 Titan flybys. "It seems clear that both instruments are detecting the same basic feature on or controlled by Titan's surface," said Dr. Alfred S. McEwen, Cassini imaging team scientist, also of the University of Arizona. "This bright patch may be due to an impact event, landslide, cryovolcanism or atmospheric processes. Its distinct color and brightness suggest that it may have formed relatively recently."

Other bright spots have been seen on Titan, but all have been transient features that move or disappear within hours, and have different spectral (color) properties than this feature. This spot is persistent in both its color and location. "It's possible that the visual and infrared spectrometer is seeing a cloud that is topographically controlled by something on the surface, and that this weird, semi-circular feature is causing this cloud," said Dr. Elizabeth Turtle, Cassini imaging team associate, also from the Lunar and Planetary Laboratory.

"If the spot is a cloud, then its longevity and stability imply that it is controlled by the surface. Such a cloud might result from airflow across low mountains or outgassing caused by geologic activity," said Jason Barnes, a postdoctoral researcher working with the visual and infrared mapping spectrometer team at the University of Arizona.

The spot could be reflected light from a patch of terrain made up of some exotic surface material. "Titan's surface seems to be mostly dirty ice. The bright spot might be a region with different surface composition, or maybe a thin surface deposit of non-icy material," Barnes added.

Scientists have also considered that the spot might be mountains. If so, they'd have to be much higher than the 100-meter-high (300-foot) hills Cassini's radar altimeter has seen so far. Scientists doubt that Titan's crust could support such high mountains.

The visual and infrared mapping spectrometer team will be able to test the hot spot hypothesis on the July 2, 2006, Titan flyby, when they take nighttime images of the same area. If the spot glows at night, researchers will know it's hot.

For more information about the Cassini-Huygens mission visit http://saturn.jpl.nasa.gov and http://www.nasa.gov/cassini. For additional images visit the visual and infrared mapping spectrometer page at http://wwwvims.lpl.arizona.edu and the Cassini imaging team homepage http://ciclops.org.

The Cassini-Huygens mission is a cooperative project of NASA, the European Space Agency and the Italian Space Agency. The Jet Propulsion Laboratory, a division of the California Institute of Technology in Pasadena, manages the mission for NASA's Science Mission Directorate, Washington, D.C. The Cassini orbiter and its two onboard cameras were designed, developed and assembled at JPL. The visual and infrared mapping spectrometer team is based at the University of Arizona. The imaging team is based at the Space Science Institute in Boulder, Co.
+ Cassini home page
+ Latest news and images
+ VIMS page
+ Ciclops