Artist's concept of what binary asteroid 2017 YE5 might look like. The two objects showed striking differences in radar reflectivity, which could indicate that they have different surface properties.› Full image and caption
Credit: NASA/JPL-Caltech

Artist's illustration of the trajectory of asteroid 2017 YE5 through the solar system. At its closest approach to Earth, the asteroid came to within 16 times the distance between Earth and the moon.› Full image and caption
Credit: NASA/JPL-Caltech 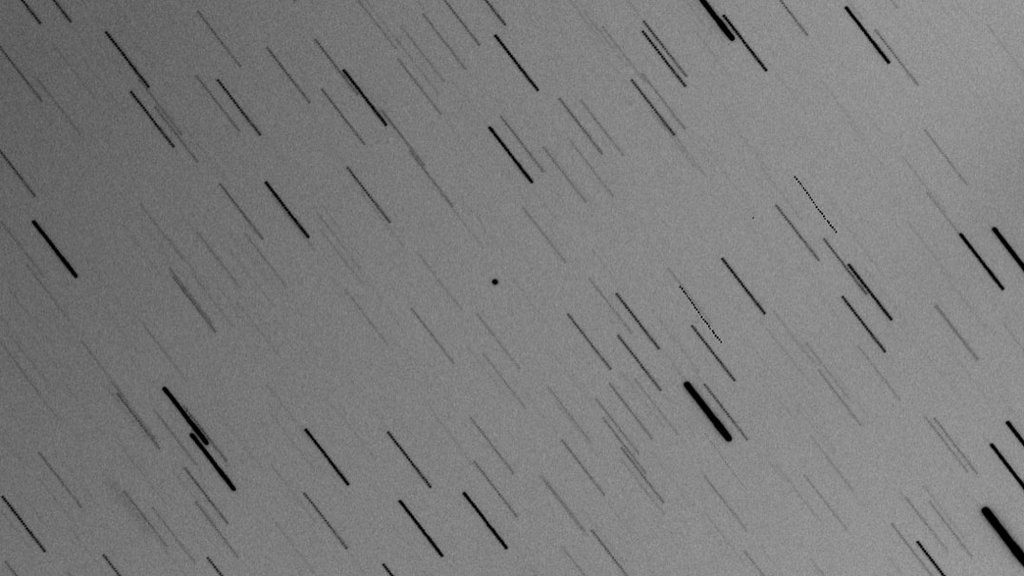 Three of the world's largest radio telescopes have revealed that a near-Earth asteroid discovered last year is actually two objects, nearly equal in size, orbiting each other.

New observations by three of the world's largest radio telescopes have revealed that an asteroid discovered last year is actually two objects, each about 3,000 feet (900 meters) in size, orbiting each other.

Three of the world's largest radio telescopes team up to show a rare double asteroid. 2017 YE5 is only the fourth binary near-Earth asteroid ever observed in which the two bodies are roughly the same size, and not touching. This video shows radar images of the pair gathered by Goldstone Solar System Radar, Arecibo Observatory and Green Bank Observatory.

Near-Earth asteroid 2017 YE5 was discovered with observations provided by the Cadi Ayyad University Morocco Oukaimeden Sky Survey on Dec. 21, 2017, but no details about the asteroid's physical properties were known until the end of June. This is only the fourth "equal mass" binary near-Earth asteroid ever detected, consisting of two objects nearly identical in size, orbiting each other. The new observations provide the most detailed images ever obtained of this type of binary asteroid.

On June 21, the asteroid 2017 YE5 made its closest approach to Earth for at least the next 170 years, coming to within 3.7 million miles (6 million kilometers) of Earth, or about 16 times the distance between Earth and the Moon. On June 21 and 22, observations by NASA's Goldstone Solar System Radar (GSSR) in California showed the first signs that 2017 YE5 could be a binary system. The observations revealed two distinct lobes, but the asteroid's orientation was such that scientists could not see if the two bodies were separate or joined. Eventually, the two objects rotated to expose a distinct gap between them. 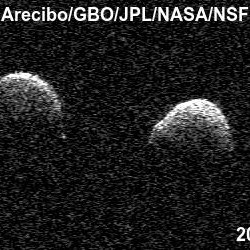 Bi-static radar images of the binary asteroid 2017 YE5 from the Arecibo Observatory and the Green Bank Observatory on June 25. The observations show that the asteroid consists of two separate objects in orbit around each other. Credit: Arecibo/GBO/NSF/NASA/JPL-Caltech
Full image and caption

Scientists at the Arecibo Observatory in Puerto Rico had already planned to observe 2017 YE5, and they were alerted by their colleagues at Goldstone of the asteroid's unique properties. On June 24, the scientists teamed up with researchers at the Green Bank Observatory (GBO) in West Virginia and used the two observatories together in a bi-static radar configuration (in which Arecibo transmits the radar signal and Green Bank receives the return signal). Together, they were able to confirm that 2017 YE5 consists of two separated objects. By June 26, both Goldstone and Arecibo had independently confirmed the asteroid's binary nature.

The new observations obtained between June 21 and 26 indicate that the two objects revolve around each other once every 20 to 24 hours. This was confirmed with visible-light observations of brightness variations by Brian Warner at the Center for Solar System Studies in Rancho Cucamonga, California.

Radar imaging shows that the two objects are larger than their combined optical brightness originally suggested, indicating that the two rocks do not reflect as much sunlight as a typical rocky asteroid. 2017 YE5 is likely as dark as charcoal. The Goldstone images taken on June 21 also show a striking difference in the radar reflectivity of the two objects, a phenomenon not seen previously among more than 50 other binary asteroid systems studied by radar since 2000. (However, the majority of those binary asteroids consist of one large object and a much smaller satellite.) The reflectivity differences also appear in the Arecibo images and hint that the two objects may have different densities, compositions near their surfaces, or different surface roughnesses. 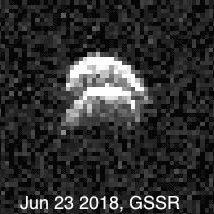 The discovery of the binary nature of 2017 YE5 provides scientists with an important opportunity to improve understanding of different types of binaries and to study the formation mechanisms between binaries and contact binaries, which may be related. Analysis of the combined radar and optical observations may allow scientists to estimate the densities of the 2017 YE5 objects, which will improve understanding of their composition and internal structure, and of how they formed.

The Goldstone observations were led by Marina Brozovic, a radar scientist at NASA's Jet Propulsion Laboratory in Pasadena, California.

In addition to the resources NASA puts into understanding asteroids, the PDCO also partners with other U.S. government agencies, university-based astronomers, and space science institutes across the country, often with grants, interagency transfers and other contracts from NASA. They also collaborate with international space agencies and institutions that are working to track and better understand these smaller objects of the Solar System. In addition, NASA values the work of numerous highly skilled amateur astronomers, whose accurate observational data helps improve asteroid orbits after discovery.