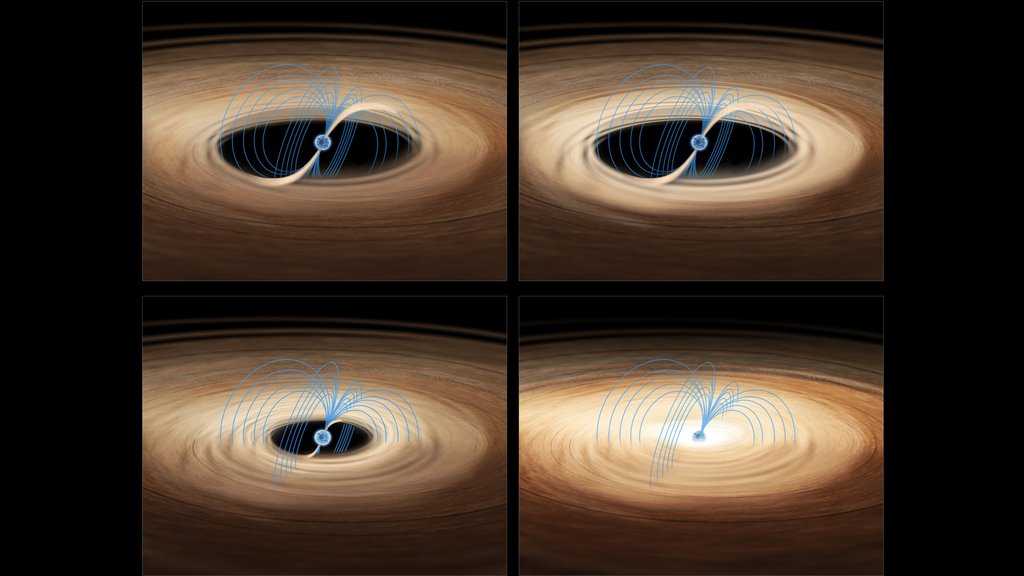 These four images show an artist's impression of gas accreting onto the neutron star in the binary system MXB 1730-335, also known as the "Rapid Burster."› Full image and caption

Discovered in the 1970s, the Rapid Burster is a binary system comprising a low-mass star in its prime and a neutron star -- the compact remnant of a massive star's demise. The gravitational pull of the neutron star strips its companion of some of its gas, which then forms an accretion disk and spirals toward the neutron star.

Most neutron star binary systems continuously release large amounts of X-rays, punctuated by additional X-ray flashes every few hours or days. But scientists have wondered for decades about what accounts for the Rapid Burster's sudden, erratic and extremely intense X-ray emissions -- a phenomenon seen only in one other binary system.

In the new study, researchers discovered that the neutron star's magnetic field creates a gap between the star and the disk around it, largely preventing it from feeding on matter from its stellar companion. Gas builds up until, under certain conditions, it hits the neutron star all at once, producing intense flashes of X-rays.

The new results provide the first evidence for what causes these so-called "type-II" bursts. The discovery was made with the European Space Agency's XMM-Newton mission and NASA's NuSTAR (Nuclear Spectroscopic Telescope Array) and Swift missions.