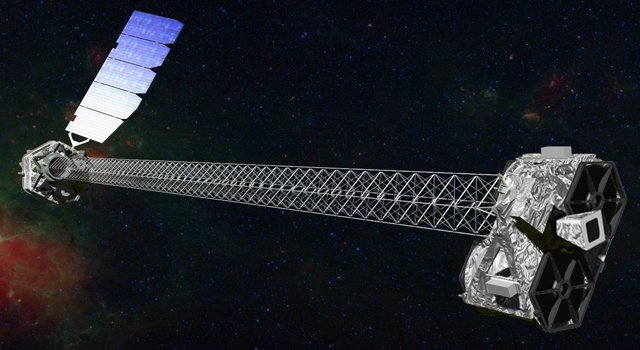 Artist's concept of NuSTAR on orbit. NuSTAR has a 10-m (30') mast that deploys after launch to separate the optics modules (right) from the detectors in the focal plane (left).› Full image and caption
Credit: NASA/JPL-Caltech

NASA's Nuclear Spectroscopic Telescope Array, or NuSTAR, is giving the wider astronomical community a first look at its unique X-ray images of the cosmos.

NASA's Nuclear Spectroscopic Telescope Array, or NuSTAR, is giving the wider astronomical community a first look at its unique X-ray images of the cosmos. The first batch of data from the black-hole hunting telescope is publicly available today, Aug. 29, via NASA's High Energy Astrophysics Science Archive Research Center, or HEASARC.

"We are pleased to present the world with NuSTAR's first look at the sky in high-energy X-rays with a true focusing telescope," said Fiona Harrison, the mission's principal investigator at the California Institute of Technology, Pasadena.

The images, taken from July to August 2012, shortly after the spacecraft launched, comprise an assortment of extreme objects, including black holes near and far. The more distant black holes are some of the most luminous objects in the universe, radiating X-rays as they ferociously consume surrounding gas. One type of black hole in the new batch of data is a blazar, which is an active, supermassive black hole pointing a jet toward Earth. Systems known as X-ray binaries, in which a compact object such as a neutron star or black hole feeds off a stellar companion, are also in the mix, along with the remnants of stellar blasts called supernovas.

The data set only contains complete observations. Data will be released at a later date for those targets still being observed.

"Astronomers can use these data to better understand the capabilities of NuSTAR and design future observing proposals. The first opportunity will be this fall, for joint observations with XMM-Newton," said Karl Forster of Caltech, who is leading the effort to package the data for the public.

Astronomers can compare data sets from different missions using HEASARC, which gives them a broader understanding of an object of interest. NuSTAR's high-energy observations help scientists bridge a gap that existed previously in X-ray astronomy, and will lead to new revelations about the bizarre and energetic side of our universe.

The HEASARC is a service of the Astrophysics Science Division at NASA's Goddard Space Flight Center in Greenbelt, Md., and the High Energy Astrophysics Division of the Smithsonian Astrophysics Observatory in Cambridge, Mass. HEASARC holdings include data obtained by NASA's high-energy astronomy missions observing in the extreme-ultraviolet, X-ray, and gamma-ray bands, as well as data from missions, balloons and ground-based facilities that have studied the relic cosmic microwave background. HEASARC is online at http://heasarc.gsfc.nasa.gov .