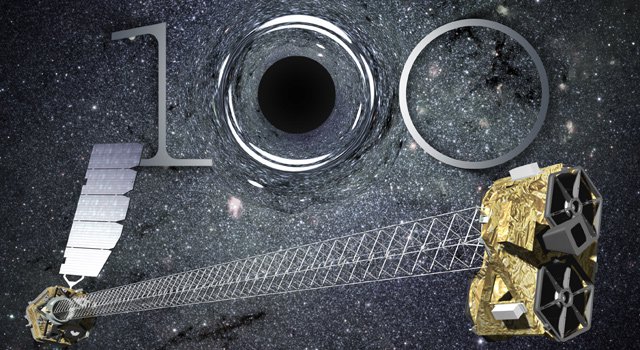 NASA's Nuclear Spectroscopic Telescope Array, or NuSTAR, celebrates 100 days in orbit on Sept. 21, 2012. The black-hole spying telescope was blasted into orbit around Earth's equator on June 13, 2012. The mission's goal is to measure high-energy X-ray light from the most extreme objects in the universe, including black holes, neutron stars and supernovae.› Full image and caption
Credit: NASA/JPL-Caltech

Tomorrow, Sept. 21, 2012, will mark 100 days since NASA's Nuclear Spectroscopic Telescope Array, or NuSTAR, launched into space from the L-1011 "Stargazer" aircraft. Since completing its 30-day checkout, the telescope has been busy making its first observations of black holes, super-dense dead stars and the glowing remains of exploded stars.

In this early mission phase, the NuSTAR team has been getting to know their telescope better and learning how to point it precisely at targets of interest. NuSTAR has the longest mast of any astronomical telescope ever launched. The 33-foot (10-meter) flexible structure is part of the mission's innovative design, allowing NuSTAR to focus high-energy X-rays into sharp images for the first time. The team has been spending time understanding the mast's mechanics and how they affect the telescope's pointing.

In addition, NuSTAR has continued to team up with other observatories, including NASA's Chandra and Swift telescopes, to make coordinated observations. These joint observations allow astronomers to interpret data from their telescopes more precisely, and to gain a better overall understanding of some of the most extreme events in the cosmos.

As its journey continues, NuSTAR will explore many more targets in our galaxy and beyond.