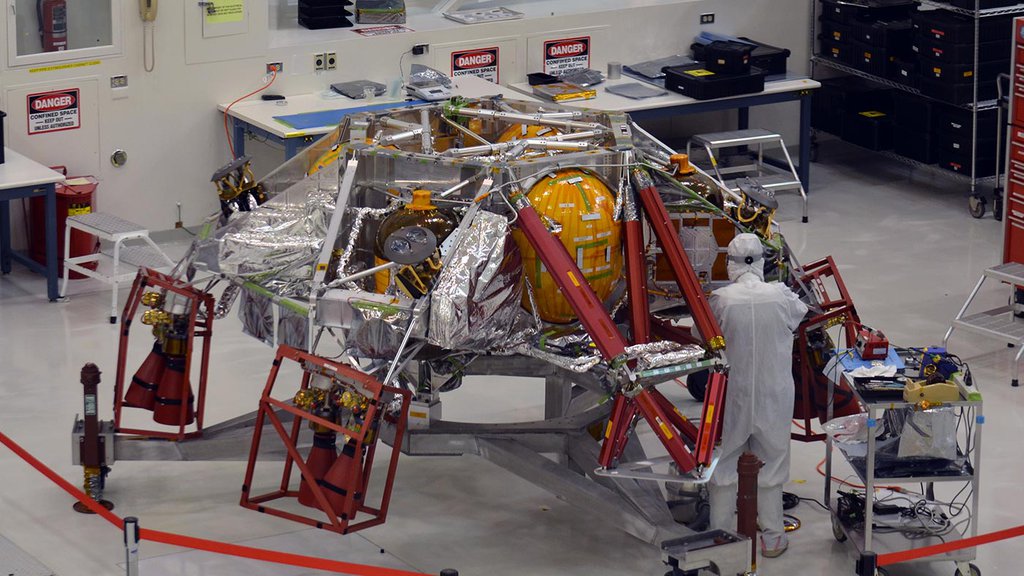 A technician works on the descent stage for NASA's Mars 2020 mission inside JPL's Spacecraft Assembly Facility. Mars 2020 is slated to carry NASA's next Mars rover to the Red Planet in July of 2020.› Full image and caption
Credit: NASA/JPL-Caltech

The first planned ATLO activities will involve electrical integration of flight hardware into the mission's descent stage. The Mars 2020 rover, as well as its cruise stage, aeroshell and descent stage -- a rocket-powered "sky crane" that will lower the rover to the planet's surface -- will undergo final assembly at the Spacecraft Assembly Facility High Bay 1 at NASA's Jet Propulsion Laboratory in Pasadena, California.

"No better place in the world to assemble NASA's next Mars rover than JPL's High Bay 1," said Mars 2020 Project Manager John McNamee at JPL. "On the floor you'll see the components of our spacecraft taking shape -- put together by people who are the best in the world at what they do. And on the wall behind them you will see all the logos of the historic missions of exploration that have also been assembled in High Bay 1 in the past."

Those missions include the Ranger missions to the moon (the first time America reached out and touched the moon), the Mariner mission to Venus (the first spacecraft to successfully encounter another planet) and Mars rovers.

Over the next year-and-a-half, engineers and technicians will add subsystems such as avionics, power, telecommunications, mechanisms, thermal systems and navigation systems onto the spacecraft. The propulsion systems were installed earlier this year on the cruise and descent stage main structures.

Mars 2020 is targeted for launch in July 2020 aboard an Atlas V 541 rocket from Space Launch Complex 41 at Cape Canaveral Air Force Station in Florida. The rover will conduct geological assessments of its landing site on Mars, determine the habitability of the environment, search for signs of ancient Martian life, and assess natural resources and hazards for future human explorers. Additionally, scientists will use the instruments aboard the rover to identify and collect samples of rock and soil, encase them in sealed tubes, and leave them on the surface of Mars for potential return to Earth by a future mission to the Red Planet.

The mission will build on the achievements of the Curiosity rover and other Mars Exploration Program missions, and offer opportunities to deploy new capabilities developed through investments by NASA's Space Technology Program and Human Exploration and Operations Mission Directorate, as well as contributions from international partners.