Next Mars Rover Gets a Test Taste of Mars Conditions 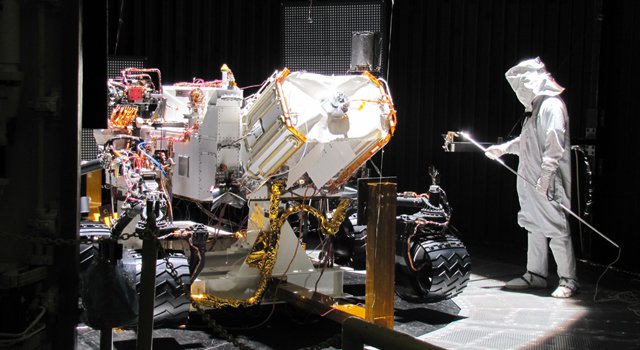 This image shows preparation for one phase of testing of the Mars Science Laboratory rover, Curiosity. The testing during March 2011 in a 25-foot-diameter (7.6-meter-diameter) space-simulation chamber was designed to put the rover through operational sequences in environmental conditions similar to what it will experience on the surface of Mars. › Full image and caption 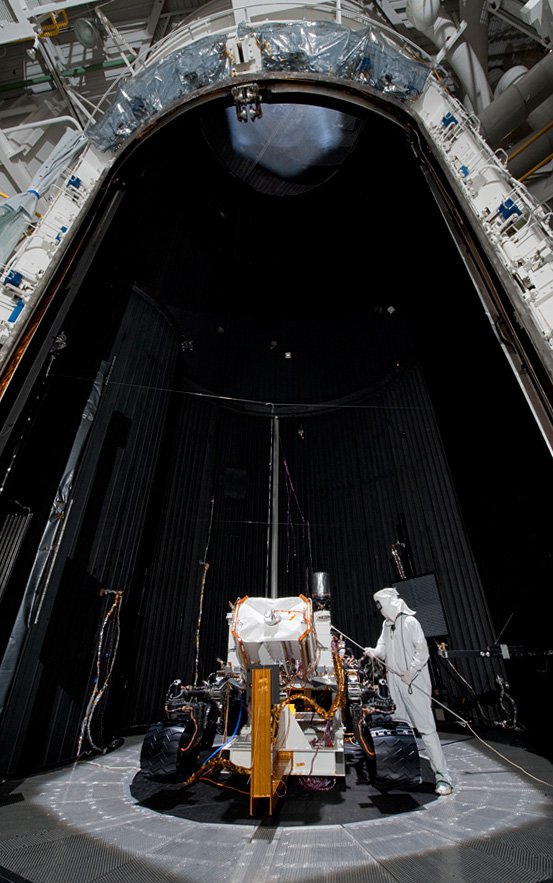 This March 8, 2011, image shows the Mars Science Laboratory rover, Curiosity, fully assembled and ready for testing with all primary flight hardware and instruments. The test chamber's door is still open. After the door is closed, a near-vacuum environment can be established, and the chamber walls flooded with liquid nitrogen for chilling to minus 130 degrees Celsius (minus 202 degrees Fahrenheit). › Full image and caption

For most of this month, the Mars Science Laboratory mission's rover, Curiosity, is inside a sealed chamber where conditions simulate those it will experience on Mars.

A space-simulation chamber at NASA's Jet Propulsion Laboratory, Pasadena, Calif., is temporary home this month for the Curiosity rover, which will land on Mars next year.

Tests inside the 25-foot-diameter chamber (7.6-meters) are putting the rover through various sequences in environmental conditions resembling Martian surface conditions. After the chamber's large door was sealed last week, air was pumped out to near-vacuum pressure, liquid nitrogen in the walls dropped the temperature to minus 130 degrees Celsius (minus 202 degrees Fahrenheit), and a bank of powerful lamps simulated the intensity of sunshine on Mars.

Other portions of NASA's Mars Science Laboratory spacecraft, including the cruise stage, descent stage and backshell, remain in JPL's Spacecraft Assembly Facility, where Curiosity was assembled and where the rover will return after the simulation-chamber tests. In coming months, those flight system components and the rover will be shipped to NASA's Kennedy Space Center in Florida for final preparations before the launch period of Nov. 25 to Dec. 18, 2011.

The mission will use Curiosity to study one of the most intriguing places on Mars -- still to be selected from among four finalist landing-site candidates. It will study whether a selected area of Mars has offered environmental conditions favorable for microbial life and for preserving evidence about whether Martian life has existed.

JPL, a division of the California Institute of Technology in Pasadena, manages the Mars Science Laboratory mission for the NASA Science Mission Directorate, Washington. For more information about the mission, visit http://www.nasa.gov/msl.