Next Departure for Mars Stands Ready to Fly 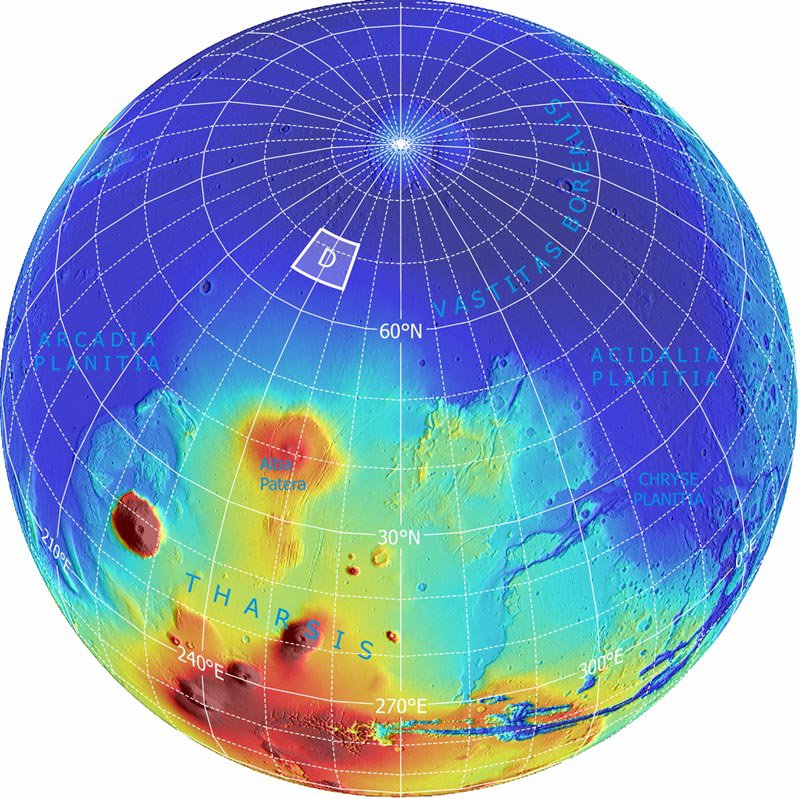 The planned landing site for NASA's Phoenix Mars Lander lies at a latitude on Mars equivalent to northern Alaska on Earth. It is within the region designated "D" on this global image.+ Full image and caption
Credit: NASA/JPL-Caltech/Washington Univ. St. Louis/Univ. of Arizona

A NASA robotic explorer equipped to dig up and analyze icy soil on Mars sits atop a 13-story tall stack of rocket engines prepared for liftoff before sunup on Saturday.

CAPE CANAVERAL, Fla. -- A NASA robotic explorer equipped to dig up and analyze icy soil on Mars sits atop a 13-story tall stack of rocket engines prepared for liftoff before sunup on Saturday.

"We have worked for four years to get to this point, so we are all very excited," said Barry Goldstein, Phoenix project manager at NASA's Jet Propulsion Laboratory, Pasadena. "Our attention after launch will be focused on flying the spacecraft to our selected landing site, preparing for surface operations, and continuing our relentless examination and testing for the all-important descent and landing on May 25 of next year."

Phoenix will travel 679 million kilometers (422 million miles) in an outward arc from Earth to Mars. It will determine whether icy soil on far northern Mars has conditions that have ever been suitable for life.

"Phoenix investigates the recent Odyssey discovery of near-surface ice in the northern plains on Mars," said Phoenix Principal Investigator Peter Smith of the University of Arizona, Tucson. "Our instruments are specially designed to find evidence for periodic melting of the ice and to assess whether this large region represents a habitable environment for Martian microbes."

The Phoenix mission was proposed in 2002 by an international team led by Smith. Twenty-four other teams also submitted proposals to be the first Mars Scout mission. NASA chose Phoenix in 2003. Phoenix uses a lander structure built for the 2001 Mars Surveyor mission, which was scaled down before launch to an orbiter-only mission.

"The spacecraft system and software development matured early in the program. This enabled us to thoroughly test a stable lander design over the entire integration and test schedule period," said Ed Sedivy, spacecraft program manager for Lockheed Martin Space Systems.

The Phoenix mission is led by Smith, with project management at the JPL and development partnership at Lockheed Martin Space Systems in Denver. The NASA Launch Services Program at Kennedy Space Center and the United Launch Alliance are responsible for the Delta II launch service. International contributions are provided by the Canadian Space Agency; the University of Neuchatel, Switzerland; the University of Copenhagen, Denmark; the Max Planck Institute, Germany; and the Finnish Meteorological Institute. JPL is a division of the California Institute of Technology in Pasadena.