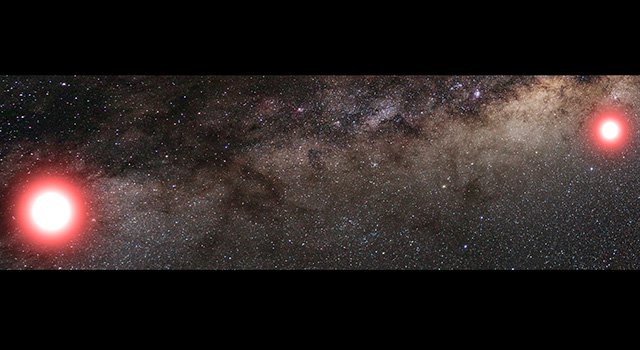 This artist's rendering shows a newly discovered planet (far right) orbiting one star (right) of a binary star system. The discovery, made by a collaboration of international research teams and led by researchers at The Ohio State University, expands astronomers' notions of where to look for planets in our galaxy. The research was funded in part by NASA.
Credit: Cheongho Han, Chungbuk National University, Republic of Korea

A planet twice the mass of Earth has been spotted with twin parent stars.

A newly discovered planet in a binary, or twin, star system located 3,000 light-years from Earth is expanding astronomers' notions of where Earth-like -- and even potentially habitable -- planets can form, and how to find them.

At twice the mass of Earth, the planet orbits one of the stars in the binary system at almost exactly the same distance at which Earth orbits the sun. However, because the planet's host star is much dimmer than the sun, the planet is much colder than Earth -- a little colder, in fact, than Jupiter's icy moon Europa.

Four international research teams, led by professor Andrew Gould of The Ohio State University in Columbus, published their discovery in the July 4 issue of the journal Science. The research is partly funded by NASA.

The study provides the first evidence that terrestrial planets can form in orbits similar to Earth's, even in a binary star system where the stars are not very far apart. Although this planet itself is too cold to be habitable, the same planet orbiting a sun-like star in such a binary system would be in the so-called "habitable zone" -- the region where conditions might be right for life.

"This greatly expands the potential locations to discover habitable planets in the future," said Scott Gaudi, professor of astronomy at Ohio State. "Half the stars in the galaxy are in binary systems. We had no idea if Earth-like planets in Earth-like orbits could even form in these systems."

Earlier evidence that planets form in binary star systems came from NASA's Kepler and Spitzer space telescopes (see http://www.nasa.gov/centers/ames/news/releases/2011/11-69AR.html and http://www.nasa.gov/mission_pages/spitzer/news/spitzer-20070329.html), but the planets and dust structures in those studies were not similar to those of Earth.

The technique astronomers use to find the planet, called OGLE-2013-BLG-0341LBb, is called gravitational microlensing. In this method, the light of a distant star is magnified by a closer star that happens to pass in front -- if a planet is also present around the foreground star, it will further alter and distort the light of the background star. The telescopes used in this study are part of several projects, including the OGLE (Optical Gravitational Lensing Experiment), MOA (Microlensing Observations in Astrophysics), MicroFUN (the Microlensing Follow Up Network), and the Wise Observatory.

Searching for planets within binary systems is tricky for most techniques, because the light from the second star complicates the interpretation of the data. "But in gravitational microlensing," Gould explained, "we don't even look at the light from the star-planet system. We just observe how its gravity affects light from a more distant, unrelated star. This gives us a new tool to search for planets in binary star systems."

Read the full news release from Ohio State at: