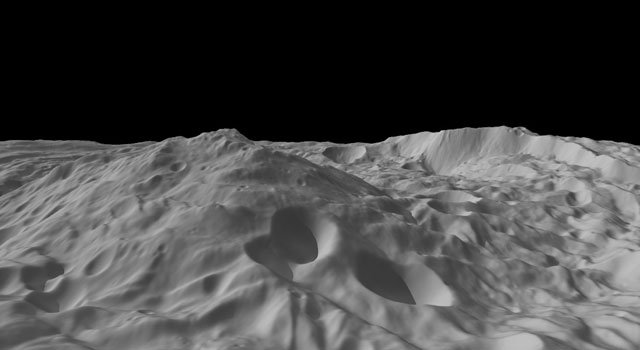 This image of the asteroid Vesta, calculated from a shape model, shows a tilted view of the topography of the south polar region. › Full image and caption

A new image from NASA's Dawn spacecraft shows a mountain three times as high as Mt. Everest, amidst the topography in the south polar region of the giant asteroid Vesta.

A new image from NASA's Dawn spacecraft shows a mountain almost three times as high as Mt. Everest, amidst the topography in the south polar region of the giant asteroid Vesta.

The peak of Vesta's south pole mountain, seen in the center of the image, rises about 13 miles (22 kilometers) above the average height of the surrounding terrain. Another impressive structure is a large scarp, a cliff with a steep slope, on the right side of this image. The scarp bounds part of the south polar depression, and the Dawn team's scientists believe features around its base are probably the result of landslides.

The image is online at: http://www.nasa.gov/mission_pages/dawn/multimedia/pia14869.html . It was created from a shape model of Vesta, and shows an oblique perspective view of the topography of the south polar region. The image resolution is about 300 meters per pixel, and the vertical scale is 1.5 times that of the horizontal scale.

Dawn entered orbit around Vesta in July. Members of the mission team will discuss what the spacecraft has seen so far during a news conference at the Annual Meeting of the Geological Society of America in Minneapolis. Among other things, they'll share their hypotheses on the origins of Vesta's curious craters.

The meeting, at the Minneapolis Convention Center, runs from Oct. 9 to 12, with the Dawn news conference scheduled for Wednesday, Oct. 12, at 10 a.m. PDT (noon CDT).

The event will air live on the Geological Society of America webcast page at:
http://hosted.mediasite.com/mediasite/Viewer/?peid=e8adbee5a37e455fbe199b29129e3b7c1d . Media representatives not able to attend the meeting may participate by registering at: http://rock.geosociety.org/forms/11_pressConf.asp . More information about the webcast is at:
http://www.geosociety.org/news/pr/11-63.html .

The event will also be carried live, with a moderated chat, at: http://www.ustream.tv/nasajpl2 .

The news conference panelists are:

Following a year at Vesta, the spacecraft will depart in July 2012 for Ceres, where it will arrive in 2015. Dawn's mission to Vesta and Ceres is managed by the Jet Propulsion Laboratory, Pasadena, Calif., for NASA's Science Mission Directorate in Washington. JPL is a division of the California Institute of Technology in Pasadena. Dawn is a project of the directorate's Discovery Program, managed by NASA's Marshall Space Flight Center in Huntsville, Ala. UCLA is responsible for overall Dawn mission science. Orbital Sciences Corp. in Dulles, Va., designed and built the spacecraft. The German Aerospace Center, the Max Planck Institute for Solar System Research, the Italian Space Agency and the Italian National Astrophysical Institute are international partners on the mission team.

More information about the Dawn mission is at: http://www.nasa.gov/dawn and http://dawn.jpl.nasa.gov . To follow the mission on Twitter, visit: http://www.twitter.com/NASA_Dawn .