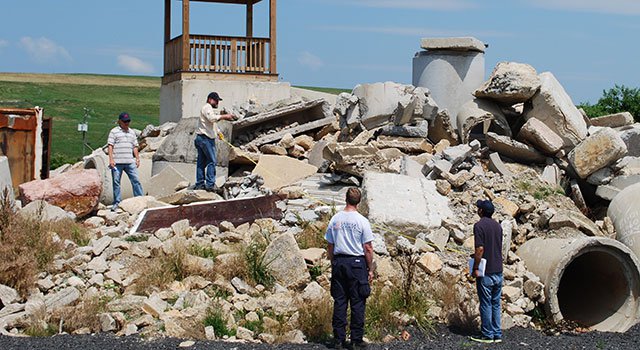 Researchers performed a test of the Finding Individuals for Disaster and Emergency Response (FINDER) prototype technology -- which can locate individuals buried in disasters -- at the Virginia Task Force 1 Training Facility in Lorton, VA. The device uses radar technology developed at NASA's Jet Propulsion Laboratory in Pasadena, Calif., to sense the heartbeats and breathing of humans hidden behind piles of rubble. Included in the picture are members of the JPL team: Gary Glass at far left; Jim Lux, second from left; and Salman Haque at far right.
Credit: DHS/John Price

New technology may allow victims trapped in piles of rubble to be rescued more quickly.

When natural disasters or human-made catastrophes topple buildings, search and rescue teams immediately set out to find victims trapped beneath the wreckage. During these missions, time is imperative, and the ability to quickly detect living victims greatly increases the chances of rescue and survival.

FINDER was created to detect a human heartbeat buried beneath 30 feet (9 meters) of crushed material, hidden behind 20 feet (6 meters) of solid concrete, and from a distance of 100 feet (30 meters) in open space.

"Testing proved successful in locating a task force member buried in 30 feet of mixed concrete, rebar and gravel rubble from a distance of over 30 feet," said John Price, DHS Science and Technology program manager. "This capability will complement the current urban search and rescue tools such as canines, listening devices and video cameras to detect the presence of living victims in rubble."

In disaster scenarios, like earthquakes and tornadoes, the debris from the disasters causes the radar signals of FINDER to bounce back irregularly, making it difficult to decipher the signals. "Isolating the relatively weak signal of a heartbeat within the noisy signals becomes a difficult task," said Edward Chow, JPL program manager. "JPL's radar expertise helps in this challenge."

JPL uses advanced data processing systems to pick out faint signals. The microwave radar technology is sensitive enough to distinguish the unique signature of a human's breathing pattern and heartbeat from that of other living creatures, such as rats. The advantage of this technology is to allow first responders to quickly ascertain if a living human is present in the debris. The technology is sensitive enough that victims, whether conscious or not, can easily be detected, which helps responders decide the most efficient course of action.

"It is anticipated that a commercialized technology could be ready for search and rescue operations as early as spring 2014," Price said.

The earlier tests resulted in design changes that are being incorporated into a new version of the device. These changes include a revised user interface, and increased battery life of up to 14 hours. The mechanical and electronic design has evolved with the core being a lightweight sensing module that uses a USB interface to integrate an antenna, radar electronics and digital processing.

"This module is the key to future miniaturization and the use of FINDER sensing technology in other applications," said James Lux, task manager for the FINDER project at JPL. Those applications include installing FINDER on proposed search and rescue robots, such as JPL's Urbie, on stretchers or ambulances to monitor a patient's heartbeat, and in biology research to distinguish species.

The research partners continue developmental efforts to construct a final prototype while using a wealth of practitioner input and recommendations following the test searches. Future phases of development will focus on a more specific locator function, which will help determine not only the presence of a victim, but more precisely where in the rubble the victim is located.