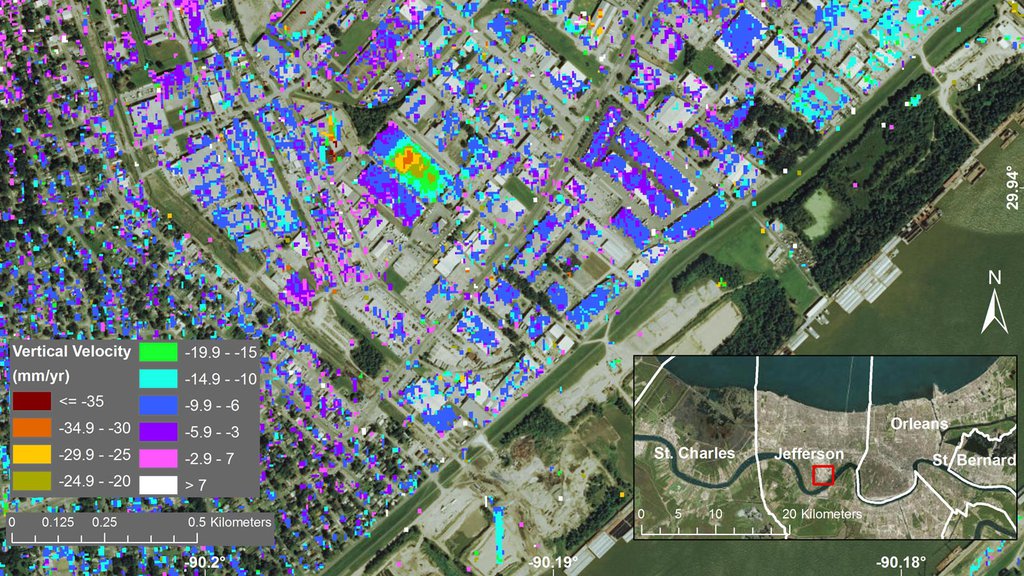 Subsidence in Jefferson Parish, Louisiana, from June 2009 to July 2012, as seen by NASA's UAVSAR instrument. The measured displacements are a combination of movement of the ground and of individual structures. The inset at lower right shows the parish location within Greater New Orleans.
Credit: NASA/JPL-Caltech, Esri 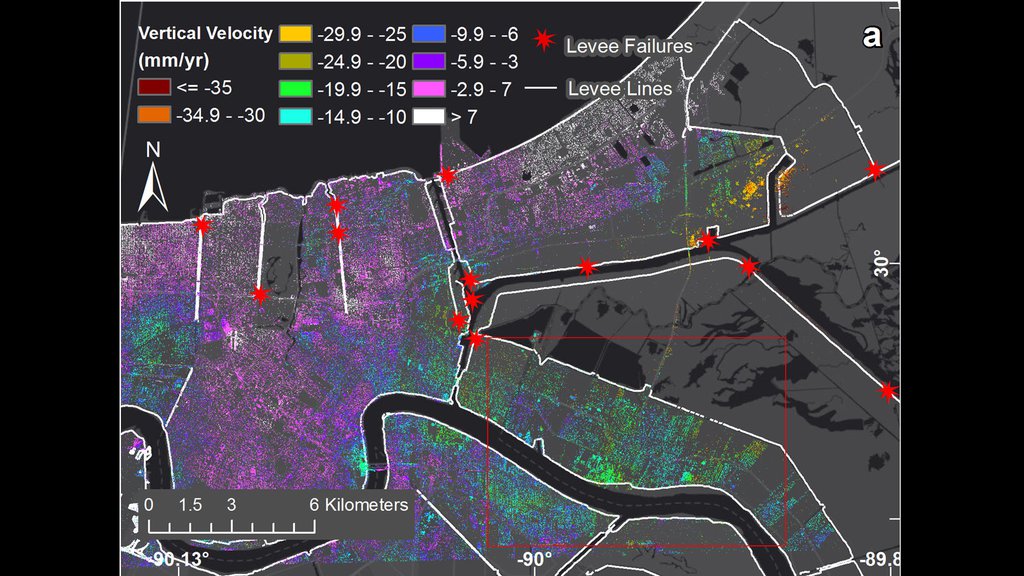 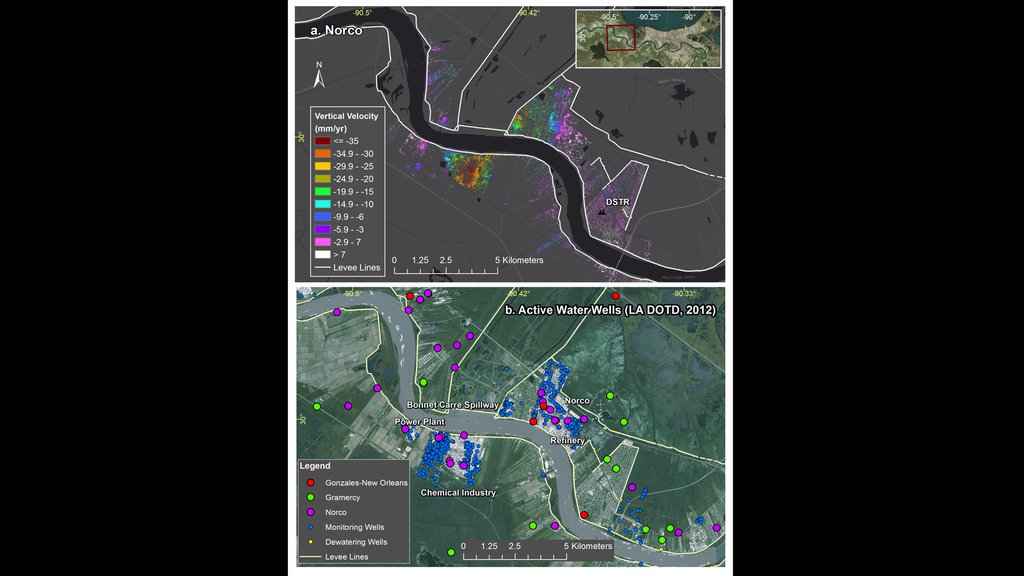 Top: Subsidence rates around Norco, Louisiana, and the location of flood protection levees (white). Bottom: Location of water wells active in 2012, local industry and the Bonnet Carre Spillway. The highest subsidence forms a bowl within the major industry site to the south of the river.
Credit: NASA/JPL-Caltech, Esri

New Orleans and surrounding areas continue to sink due to a combination of natural and human-induced processes, finds a new NASA/university study using NASA airborne radar.

› Highest-resolution study to date of ground sinking in and around New Orleans.

The research was the most spatially-extensive, high-resolution study to date of regional subsidence in and around New Orleans, measuring its effects and examining its causes. Scientists at NASA's Jet Propulsion Laboratory, Pasadena, California; UCLA; and the Center for GeoInformatics at Louisiana State University, Baton Rouge, collaborated on the study, which covered the period from June 2009 to July 2012.

The highest rates of sinking were observed upriver along the Mississippi River around major industrial areas in Norco, and in Michoud, with up to 2 inches (50 millimeters) a year of sinking. The team also observed notable subsidence in New Orleans' Upper and Lower 9th Ward, and in Metairie, where the measured ground movement could be related to water levels in the Mississippi. At the Bonnet Carré Spillway east of Norco -- New Orleans' last line of protection against springtime river floods overtopping the levees -- research showed up to 1.6 inches (40 millimeters) a year of sinking behind the structure and up to 1.6 inches (40 millimeters) a year at nearby industrial facilities.

While the study cites many contributing factors for the regional subsidence, the primary contributors were found to be groundwater pumping and dewatering (surface water pumping to lower the water table, which prevents standing water and soggy ground).

JPL scientist and lead author Cathleen Jones said study results will be used to improve models of subsidence for the Mississippi River Delta that decision makers use to inform planning.

"Agencies can use these data to more effectively implement actions to remediate and reverse the effects of subsidence, improving the long-term coastal resiliency and sustainability of New Orleans," Jones said. "The more recent land elevation change rates from this study will be used to inform flood modeling and response strategies, improving public safety."

Around the world, the loss of delta lands due to subsidence and associated increases in flood risk are major issues facing coastal communities, especially in the face of ongoing and possibly accelerating global sea level rise. The Mississippi River delta is losing its natural coastal barriers -- the delta wetlands and barrier islands -- increasing flood risk across the area. In response, the region has increased investment in infrastructure and restoration activities to protect human populations and areas of high economic value.

The landscape of Southeast Louisiana was built upon a coastal delta created by the Mississippi River during the past 8,000 years as sea level rise due to glacial melting in the last ice age slowed. Before humans intervened, natural subsidence was offset by a combination of sediments deposited during Mississippi River floods and organic soil produced from the decay of wetland vegetation. Construction of flood control levees to protect the Gulf Coast economy and local populations interrupted the sediment supply, leading to a net increase in land subsidence.

In Greater New Orleans, local geology plays a major role in flooding and subsidence. The city lies along the current path of the Mississippi River and is built on modern and past natural levees and buried or artificially drained swamps and marshes. It is located in an area that has received sediments from multiple lobes of the Mississippi River delta over time.

To fully and accurately measure and predict future subsidence in and around New Orleans, it's necessary to better understand the various natural and human-produced processes contributing to the sinking. Those include withdrawal of water, oil and gas; compaction of shallow sediments; faulting; sinking of Earth's crust from the weight of deposited sediments; and ongoing vertical movement of land covered by glaciers during the last ice age. Jones said the comprehensive subsidence maps produced by this study, with their improved spatial resolution, help scientists differentiate these processes.

The maps were created using data from NASA's Uninhabited Aerial Vehicle Synthetic Aperture Radar (UAVSAR), which uses a technique known as interferometric synthetic aperture radar (InSAR). InSAR compares radar images of Earth's surface over time to map surface deformation with centimeter-scale precision. It measures total surface elevation changes from all sources -- human and natural, deep seated and shallow. Its data must be carefully interpreted to disentangle these phenomena, which operate at different time and space scales. UAVSAR's spatial resolution makes it ideal for measuring subsidence in New Orleans, where human-produced subsidence can be large and is often localized.

Jones said another key advantage of this study is that UAVSAR enabled better resolution of small-scale features than previous studies. "We were able to identify single structures or clusters of structures subsiding or deforming relative to the surrounding area," she said.

In addition to the UAVSAR data, researchers from the Center for GeoInformatics (C4G) at Louisiana State University provided up-to-date GPS positioning information for industrial and urban locations within southeast Louisiana. This information helped establish the rate of ground movement at these specific points. C4G maintains the most comprehensive network of GPS reference stations in the state. The Louisiana network consists of more than 50 Continuously Operating Reference Stations, or CORS sites, which acquire the horizontal and vertical coordinates at each station every second of every day. The CORS sites are part of the National Geodetic Survey network.

"We define all the parameters to reduce the ambiguities. This enables us to distill a location down to millimeter-level precision," said Joshua Kent, Geographic Information System manager at C4G. "A wide range of people rely on the CORS data, from geoscientists to surveyors, engineers and farmers."

The study is published in the Journal of Geophysical Research: Solid Earth.

UAVSAR was developed and is managed by JPL and flies on a C-20A research aircraft based at NASA's Armstrong Flight Research Center facility in Palmdale, California. Developed to test new technologies and study Earth surface dynamics, UAVSAR data are informing the design and planning for a future spaceborne radar mission, the NASA-ISRO Synthetic Aperture Radar (NISAR), which is planned to image Earth's surface at least once every 12 days.