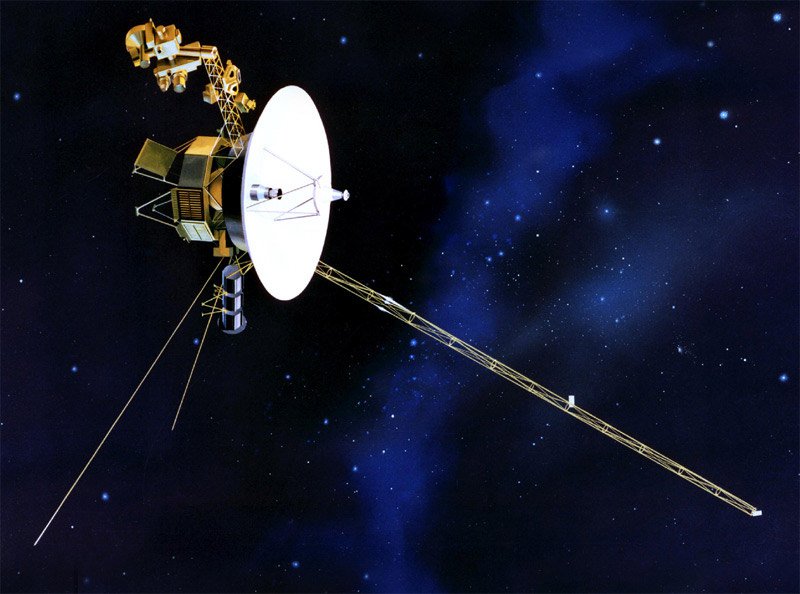 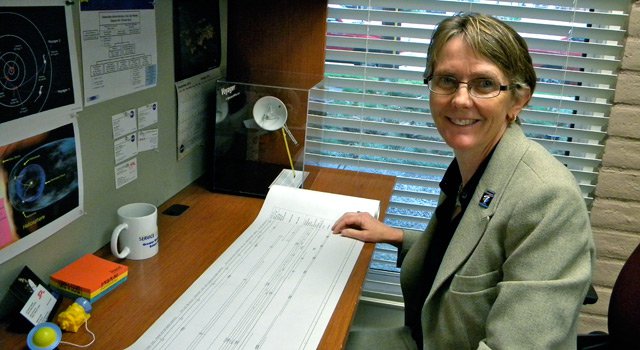 Suzanne Dodd is the new project manager for NASA's Voyager spacecraft. She first worked on Voyager in 1984, sequencing science and engineering commands for Voyager 1 and 2 in 1984. A memento of those early years is a sheet of vellum that shows the timeline of commands communicated to Voyager 2 during its closest approach to Neptune on Aug. 25, 1989.
Credit: NASA/JPL-Caltech

As NASA's two Voyager spacecraft hurtle towards the edge of our solar system, a new project manager will shepherd the spacecraft into this unexplored territory.

PASADENA, Calif. - As NASA's two Voyager spacecraft hurtle towards the edge of our solar system, a new project manager will shepherd the spacecraft into this unexplored territory: Suzanne Dodd, whose first job at NASA's Jet Propulsion Laboratory in Pasadena, Calif., involved sequencing science and engineering commands for Voyager 1 and 2 in 1984.

"I'm thrilled to re-join a pioneering mission that set up adventures for so many other spacecraft to follow," Dodd said. "There will be more firsts to come as we gather unique data once the spacecraft reach interstellar space. There isn't a single mission currently on the books that will be doing what Voyager is doing."

In four to six years, Voyager 1 is expected to cross beyond the heliosheath, the outer layer of the bubble around our solar system that is composed of ionized atoms streaming outward from our sun. Voyager 2 is expected to cross that boundary several years later. Once beyond our heliosheath, the two Voyager spacecraft will begin exploring the interstellar medium, which fills the space between stars.

When Dodd started on Voyager, Voyager 2 was on its way to Uranus. She stayed with the mission until Voyager 2 completed its closest approach to Neptune. No other spacecraft have visited these two outer planets.

Dodd still keeps a rolled-up sheet of vellum in her cabinet that shows the timeline of commands communicated to the spacecraft during its closest approach to Neptune on Aug. 25, 1989. The encounter with our seventh planet revealed the Great Dark Spot, a giant storm roiling Neptune's atmosphere, and geysers erupting from pinkish-hued nitrogen ice that forms the polar cap of Neptune's moon Triton.

After leaving Voyager in October 1989, Dodd moved on to other JPL projects, including NASA's Cassini mission to Saturn. She left JPL in 1999 to work at the Spitzer Science Center, which processes data from NASA's Spitzer Space Telescope, and, later, the Infrared Processing and Analysis Center, which archives infrared astronomy data from many sources. Dodd eventually managed both those centers, which are based at the California Institute of Technology in Pasadena.

"Coming back to Voyager is like re-learning a language you knew as a kid, but never spoke as an adult," said Dodd. "I'm excited to be immersed in the details again."

Dodd says the main challenge with Voyager now is to work within the boundaries of the spacecrafts' limited resources to make sure they collect the long-anticipated interstellar data. For example, Voyager's radioisotope power generators, which use heat from the decay of plutonium to produce electricity, have enabled the spacecraft to operate for this extended period of time, so far away from the sun. But the power, as expected, decays over time. While supplies are expected to last through 2020, Dodd and the operations team will eventually have to turn off some instruments to manage the power resources.

"My job is to make sure the two spacecraft stay healthy and mobile," she said.