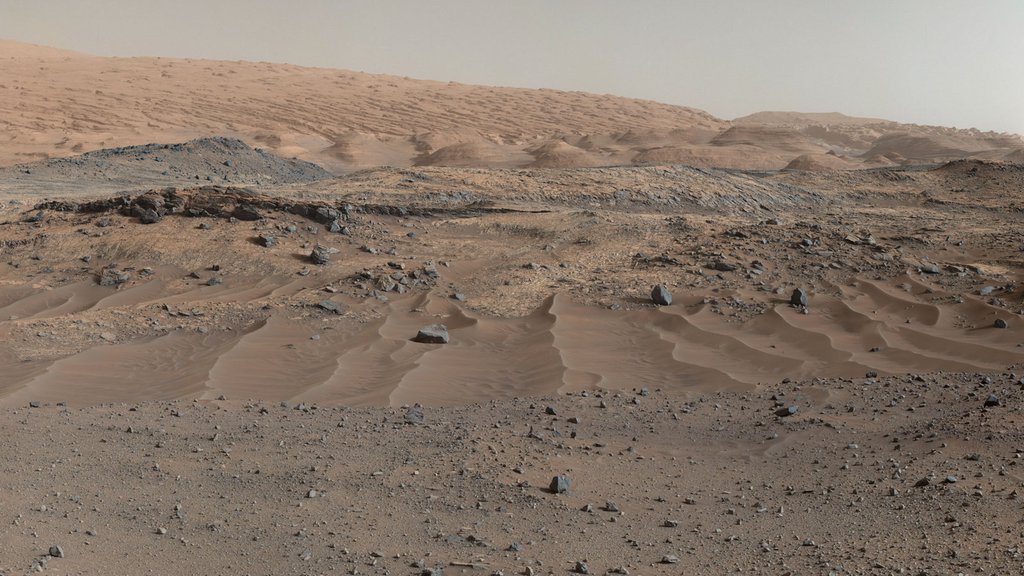 A panorama combining images from both cameras of the Mastcam on NASA's Curiosity Mars Rover shows diverse geological textures on Mount Sharp. Three years after landing on Mars, the mission is investigating this layered mountain for evidence about changes in Martian environmental conditions. › Full image and caption 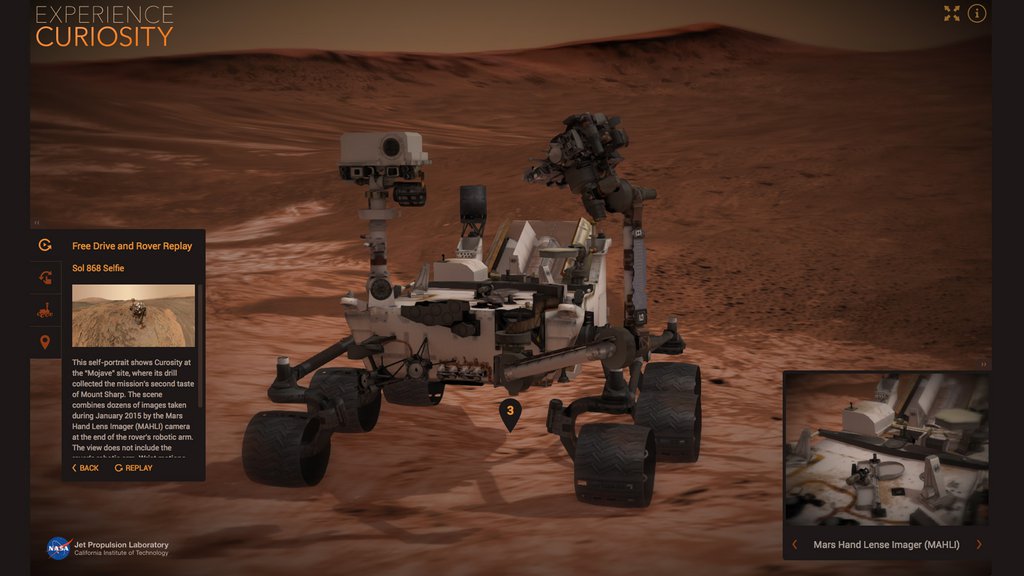 A screen capture from NASA's new Experience Curiosity website shows the rover in the process of taking its own self-portrait.
Credit: NASA/JPL-Caltech 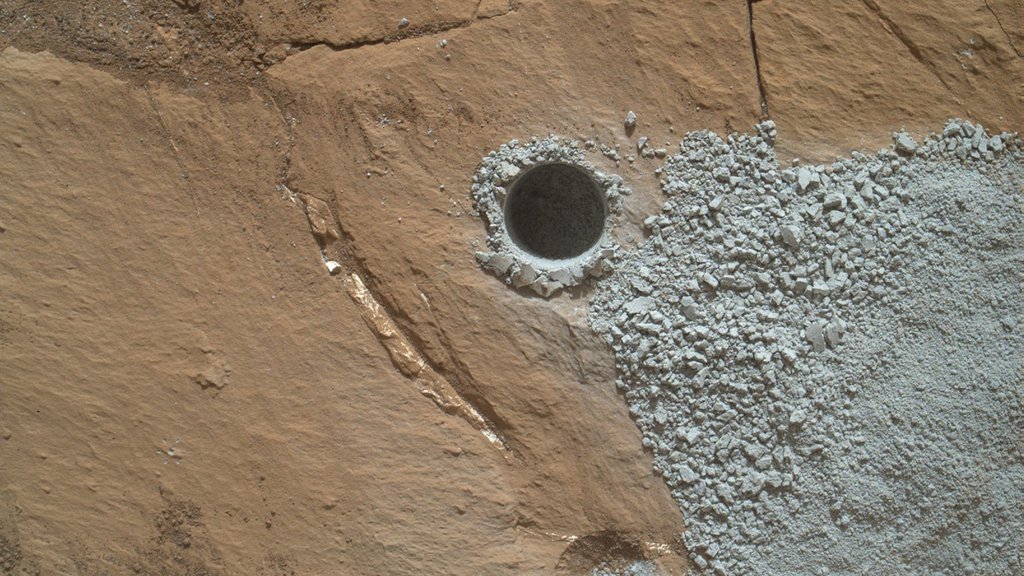 NASA's Curiosity Mars Rover drilled this hole to collect sample material from a rock target called "Buckskin" on July 30, 2015, about a week prior to the third anniversary of the rover's landing on Mars. › Full image and caption

On the three-year anniversary of the Mars landing of NASA's Curiosity rover, NASA is unveiling two new online tools, inviting the public to help with its journey to Mars.

On the three-year anniversary of the Mars landing of NASA's Curiosity rover, NASA is unveiling two new online tools that open the mysterious terrain of the Red Planet to a new generation of explorers, inviting the public to help with its journey to Mars.

Mars Trek is a free, Web-based application that provides high-quality, detailed visualizations of the planet using real data from 50 years of NASA exploration and allowing astronomers, citizen scientists and students to study the Red Planet's features.

Experience Curiosity allows viewers to journey along with the one-ton rover on its Martian expeditions. The program simulates Mars in 3-D based on actual data from Curiosity and NASA's Mars Reconnaissance Orbiter (MRO), giving users first-hand experience in a day in the life of a Mars rover.

A NASA team already is using Mars Trek to aid in the selection of possible landing sites for the agency's Mars 2020 rover, and the application will be used as part of NASA's newly announced process to examine and select candidate sites for the first human exploration mission to Mars in the 2030s.

"This tool has opened my eyes as to how we should first approach roaming on another world, and now the public can join in on the fun," said Jim Green, director of NASA's Planetary Science Division in Washington. "Our robotic scientific explorers are paving the way, making great progress on the journey to Mars. Together, humans and robots will pioneer Mars and the solar system."

Mars Trek has interactive maps, which include the ability to overlay a range of data sets generated from instruments aboard spacecraft orbiting Mars, and analysis tools for measuring surface features. Standard keyboard gaming controls are used to maneuver the users across Mars' surface, and 3-D printer-exportable topography allows users to print physical models of surface features.

Mars Trek was developed by NASA's Lunar Mapping and Modeling Project, which provides mission planners, lunar scientists and the public with analysis and data visualization tools for our moon.

Experience Curiosity also uses real science data to create a realistic and game-ready rover model based entirely on real mechanisms and executed commands. Users can manipulate the rover's tools and view Mars through each of its cameras.

"We've done a lot of heavy 3-D processing to make Experience Curiosity work in a browser. Anybody with access to the Web can take a journey to Mars," said Kevin Hussey, manager of the Visualization Applications and Development group at NASA's Jet Propulsion Laboratory in Pasadena, California, which manages and operates the Curiosity rover.

Curiosity's adventures on the Red Planet began in the early morning hours of Aug. 6, 2012, Eastern time (evening of Aug. 5, Pacific time), when a landing technique called the sky-crane maneuver deposited the rover in the 96-mile-wide (154-kilometer-wide) Gale Crater. From there, the rover began investigating its new home, discovering it had landed near an ancient lakebed sprinkled with organic material. Billions of years ago, fresh water would have flowed into this lake, offering conditions favorable for microbial life.

"At three years old, Curiosity already has had a rich and fascinating life. This new program lets the public experience some of the rover's adventures first-hand," said Jim Erickson, the project manager for the mission at JPL.

NASA has been on Mars for five decades with robotic explorers, and August traditionally has been a busy month for exploration of the planet. Viking 2 was put into orbit around Mars 39 years ago on Aug. 7, 1976, making NASA's second successful landing on the Martian surface weeks later. Mars Reconnaissance Orbiter was launched on Aug. 12, 2005, and still is in operation orbiting Mars. And Tuesday, Aug. 4, marked the eight-year anniversary of the launch of the Phoenix mission to the north polar region of the Red Planet.

NASA's orbiters and rovers have changed the way we look at Mars and enable continued scientific discoveries that one day will pave the way for astronauts to explore the Red Planet.

To download and print a 3-D model of Curiosity, go to: