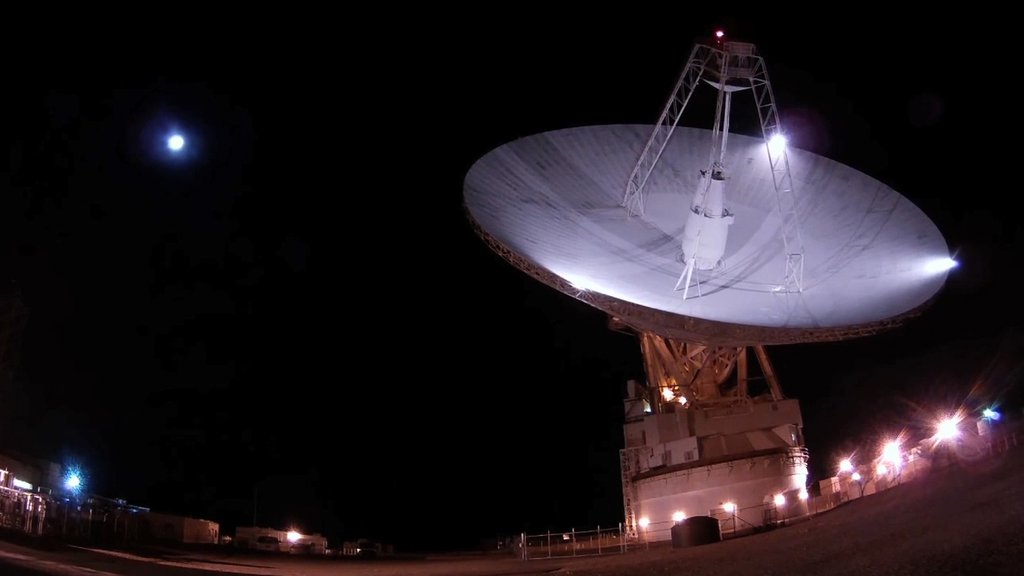 DSS-14 is NASA's 70-meter (230-foot) antenna located at the Goldstone Deep Space Communications Complex in California. It is known as the "Mars Antenna" as it was first to receive signals from the first spacecraft to closely observe Mars, Mariner 4, on March 18, 1966.
Credit: NASA/JPL-Caltech 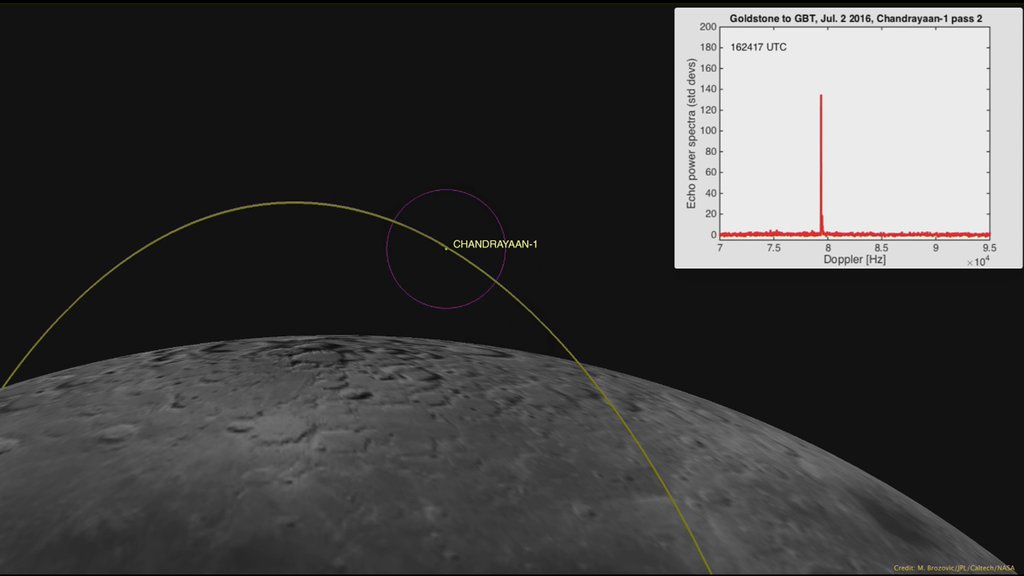 This computer-generated image depicts the Chandrayaan-1's location at time it was detected by the Goldstone Solar System radar on July 2, 2016. The 120-mile (200-kilometer) wide purple circle represents the width of the Goldstone radar beam at lunar distance. The white box in the upper-right corner of the animation depicts the strength of echo. Inside the radar beam (purple circle), the echo from the spacecraft alternated between being very strong and very weak, as the radar beam scattered from the flat metal surfaces.
Credit: NASA/JPL-Caltech 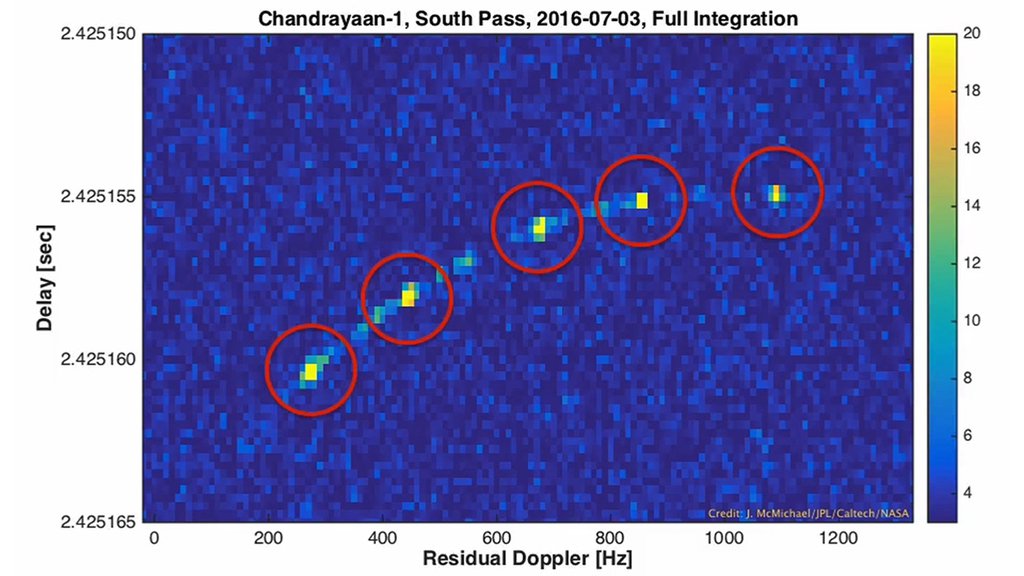 Radar imagery acquired of the Chandrayaan-1 spacecraft as it flew over the moon's south pole on July 3, 2016. The imagery was acquired using NASA's 70-meter (230-foot) antenna at the Goldstone Deep Space Communications Complex in California. This is one of four detections of Chandrayaan-1 from that day.
Credit: NASA/JPL-Caltech

A new technological application of interplanetary radar pioneered by JPL scientists has successfully located spacecraft orbiting the moon -- one active, and one dormant.

Finding derelict spacecraft and space debris in Earth's orbit can be a technological challenge. Detecting these objects in orbit around Earth's moon is even more difficult. Optical telescopes are unable to search for small objects hidden in the bright glare of the moon. However, a new technological application of interplanetary radar pioneered by scientists at NASA's Jet Propulsion Laboratory in Pasadena, California, has successfully located spacecraft orbiting the moon -- one active, and one dormant. This new technique could assist planners of future moon missions.

"We have been able to detect NASA's Lunar Reconnaissance Orbiter [LRO] and the Indian Space Research Organization's Chandrayaan-1 spacecraft in lunar orbit with ground-based radar," said Marina Brozovic, a radar scientist at JPL and principal investigator for the test project. "Finding LRO was relatively easy, as we were working with the mission's navigators and had precise orbit data where it was located. Finding India's Chandrayaan-1 required a bit more detective work because the last contact with the spacecraft was in August of 2009."

Add to the mix that the Chandrayaan-1 spacecraft is very small, a cube about five feet (1.5 meters) on each side -- about half the size of a smart car. Although the interplanetary radar has been used to observe small asteroids several million miles from Earth, researchers were not certain that an object of this smaller size as far away as the moon could be detected, even with the world's most powerful radars. Chandrayaan-1 proved the perfect target for demonstrating the capability of this technique.

While they all use microwaves, not all radar transmitters are created equal. The average police radar gun has an operational range of about one mile, while air traffic control radar goes to about 60 miles. To find a spacecraft 237,000 miles (380,000 kilometers) away, JPL's team used NASA's 70-meter (230-foot) antenna at NASA's Goldstone Deep Space Communications Complex in California to send out a powerful beam of microwaves directed toward the moon. Then the radar echoes bounced back from lunar orbit were received by the 100-meter (330-foot) Green Bank Telescope in West Virginia.

Finding a derelict spacecraft at lunar distance that has not been tracked for years is tricky because the moon is riddled with mascons (regions with higher-than-average gravitational pull) that can dramatically affect a spacecraft's orbit over time, and even cause it to have crashed into the moon. JPL's orbital calculations indicated that Chandrayaan-1 is still circling some 124 miles (200 kilometers) above the lunar surface, but it was generally considered "lost."

However, with Chandrayaan-1, the radar team utilized the fact that this spacecraft is in polar orbit around the moon, so it would always cross above the lunar poles on each orbit. So, on July 2, 2016, the team pointed Goldstone and Green Bank at a location about 100 miles (160 kilometers) above the moon's north pole and waited to see if the lost spacecraft crossed the radar beam. Chandrayaan-1 was predicted to complete one orbit around the moon every two hours and 8 minutes. Something that had a radar signature of a small spacecraft did cross the beam twice during four hours of observations, and the timings between detections matched the time it would take Chandrayaan-1 to complete one orbit and return to the same position above the moon's pole.

The team used data from the return signal to estimate its velocity and the distance to the target. This information was then used to update the orbital predictions for Chandrayaan-1.

"It turns out that we needed to shift the location of Chandrayaan-1 by about 180 degrees, or half a cycle from the old orbital estimates from 2009," said Ryan Park, the manager of JPL's Solar System Dynamics group, who delivered the new orbit back to the radar team. "But otherwise, Chandrayaan-1's orbit still had the shape and alignment that we expected."

Radar echoes from the spacecraft were obtained seven more times over three months and are in perfect agreement with the new orbital predictions. Some of the follow-up observations were done with the Arecibo Observatory in Puerto Rico, which has the most powerful astronomical radar system on Earth. Arecibo is operated by the National Science Foundation with funding from NASA's Planetary Defense Coordination Office for the radar capability.

Hunting down LRO and rediscovering Chandrayaan-1 have provided the start for a unique new capability. Working together, the large radar antennas at Goldstone, Arecibo and Green Bank demonstrated that they can detect and track even small spacecraft in lunar orbit. Ground-based radars could possibly play a part in future robotic and human missions to the moon, both for a collisional hazard assessment tool and as a safety mechanism for spacecraft that encounter navigation or communication issues.