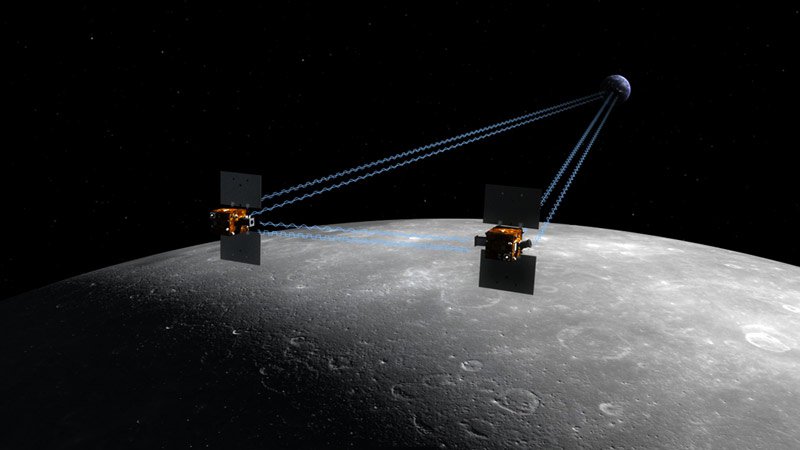 Artist concept of GRAIL mission. Grail will fly twin spacecraft in tandem orbits around the moon for several months to measure its gravity field in unprecedented detail.
Credit: NASA/JPL

The Gravity Recovery and Interior Laboratory, or GRAIL, mission, will fly twin spacecraft in tandem orbits around the moon for several months to measure its gravity field in unprecedented detail.

At a Monday, Dec. 10 meeting of the American Geophysical Union, NASA's Associate Administrator for Science Alan Stern announced the selection of a new mission that will peer deep inside the moon to reveal its anatomy and history.

The Gravity Recovery and Interior Laboratory, or GRAIL, mission is a part of NASA's Discovery Program. It will cost $375 million and is scheduled to launch in 2011. GRAIL will fly twin spacecraft in tandem orbits around the moon for several months to measure its gravity field in unprecedented detail. The mission also will answer longstanding questions about Earth's moon and provide scientists a better understanding of how Earth and other rocky planets in the solar system formed.

"GRAIL's revolutionary capabilities stood out in this Discovery mission competition owing to its unsurpassed combination of high scientific value and low technical and programmatic risk," Stern said. "GRAIL also offers to bring innovative Earth studies techniques to the moon as a precursor to their possible later use at Mars and other planets."

Scientists will use the gravity field information from the two satellites to X-ray the moon from crust to core to reveal the moon's subsurface structures and, indirectly, its thermal history.

The study technique GRAIL will use was pioneered by the joint U.S.-German Earth observing Gravity Recovery and Climate Experiment, or Grace, mission launched in 2002. The Grace satellites measure gravity changes related to the movement of mass within Earth, such as the melting of ice at the poles and changes in ocean circulation. As with Grace, both GRAIL spacecraft will be launched on a single launch vehicle.

GRAIL's principal investigator is Maria Zuber of the Massachusetts Institute of Technology in Cambridge. Zuber's team of expert scientists and engineers includes former NASA astronaut Sally Ride, who will lead the mission's public outreach efforts. A camera aboard each spacecraft will allow students and the public to interact with observations from the satellites. Each Grail spacecraft will carry the cameras to document their views from lunar orbits.

Grail will support NASA's exploration goals as the agency returns humans to the moon by 2020. In 2008, the agency will launch the Lunar Reconnaissance Orbiter, to circle the moon for at least a year and take measurements to identify future robotic and human landing sites. The orbiter also will look for potential lunar resources and document aspects of the lunar radiation environment. After a 30-year hiatus, the Lunar Reconnaissance Orbiter represents NASA's first step toward returning humans to the moon. The orbiter will be accompanied by another spacecraft, called the Lunar Crater Observation and Sensing Satellite mission, which will impact the lunar south pole to search for evidence of polar water frost.

Created in 1992, NASA's Discovery Program sponsors a series of scientist-led, cost-capped solar system exploration missions with highly focused scientific goals. The GRAIL proposal was selected from 24 submissions in response to a 2006 Announcement of Opportunity for the program. Proposals were evaluated for scientific merit, science implementation merit, and technical, management and cost feasibility.