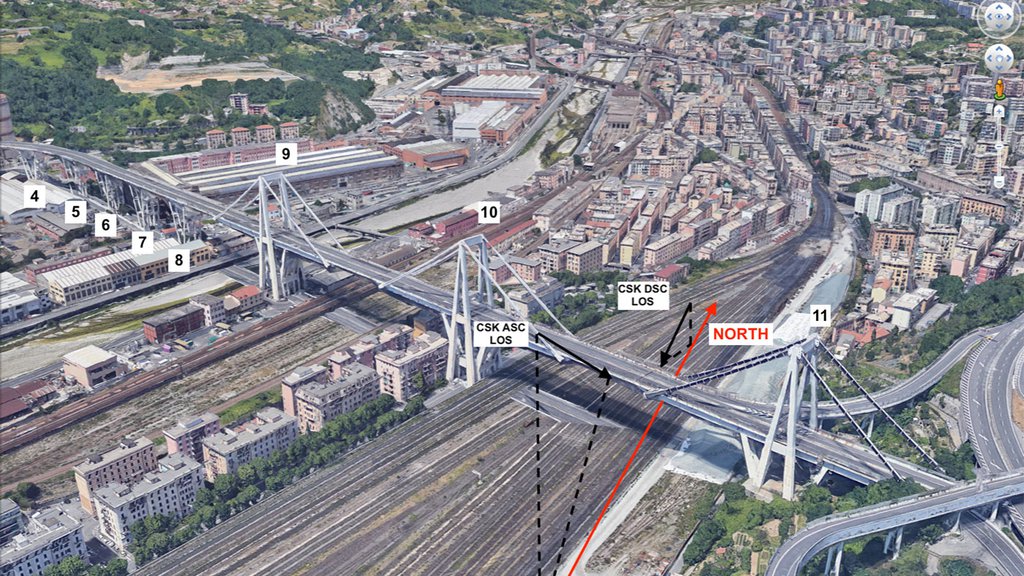 A satellite view of the Morandi Bridge in Genoa, Italy, prior to its August 2018 collapse. The numbers identify key bridge components. Numbers 4 through 8 correspond to the bridge's V-shaped piers (from West to East). Numbers 9 through 11 correspond to three independent balance systems on the bridge. In the annotated version, the black arrows identify areas of change based on data from the Cosmo-SkyMed satellite constellation.› Full image and caption
Credit: NASA/JPL-Caltech/Google

Scientists have developed a technique for analyzing satellite data that can reveal subtle structural changes in bridges and other infrastructure.

We rely on bridges to connect us to other places, and we trust that they're safe. While many governments invest heavily in inspection and maintenance programs, the number of bridges that are coming to the end of their design lives or that have significant structural damage can outpace the resources available to repair them. But infrastructure managers may soon have a new way to identify the structures most at risk of failure.

Scientists, led by Pietro Milillo of NASA's Jet Propulsion Laboratory in Pasadena, California, have developed a new technique for analyzing satellite data that can reveal subtle structural changes that may indicate a bridge is deteriorating - changes so subtle that they are not visible to the naked eye.

In August 2018, the Morandi Bridge, near Genoa, Italy, collapsed, killing dozens of people. A team of scientists from NASA, the University of Bath in England and the Italian Space Agency used synthetic aperture radar (SAR) measurements from several different satellites and reference points to map relative displacement - or structural changes to the bridge - from 2003 to the time of its collapse. Using a new process, they were able to detect millimeter-size changes to the bridge over time that would not have been detected by the standard processing approaches applied to spaceborne synthetic aperture radar observations.

They found that the deck next to the bridge's collapsed pier showed subtle signs of change as early as 2015; they also noted that several parts of the bridge showed a more significant increase in structural changes between March 2017 and August 2018 - a hidden indication that at least part of the bridge may have become structurally unsound.

"This is about developing a new technique that can assist in the characterization of the health of bridges and other infrastructure," Millilo said. "We couldn't have forecasted this particular collapse because standard assessment techniques available at the time couldn't detect what we can see now. But going forward, this technique, combined with techniques already in use, has the potential to do a lot of good."

The technique is limited to areas that have consistent synthetic aperture radar-equipped satellite coverage. In early 2022, NASA and the Indian Space Research Organization (ISRO) plan to launch the NASA-ISRO Synthetic Aperture Radar (NISAR), which will greatly expand that coverage. Designed to enable scientists to observe and measure global environmental changes and hazards, NISAR will collect imagery that will enable engineers and scientists to investigate the stability of structures like bridges nearly anywhere in the world about every week.

"We can't solve the entire problem of structural safety, but we can add a new tool to the standard procedures to better support maintenance considerations," said Milillo.

The majority of the SAR data for this study was acquired by the Italian Space Agency's COSMO-Skymed constellation and the European Space Agency's (ESA's) Sentinel-1a and -1b satellites. The research team also used historical data sets from ESA's Envisat satellite. The study was recently published in the journal Remote Sensing.

More information on NISAR can be found here: