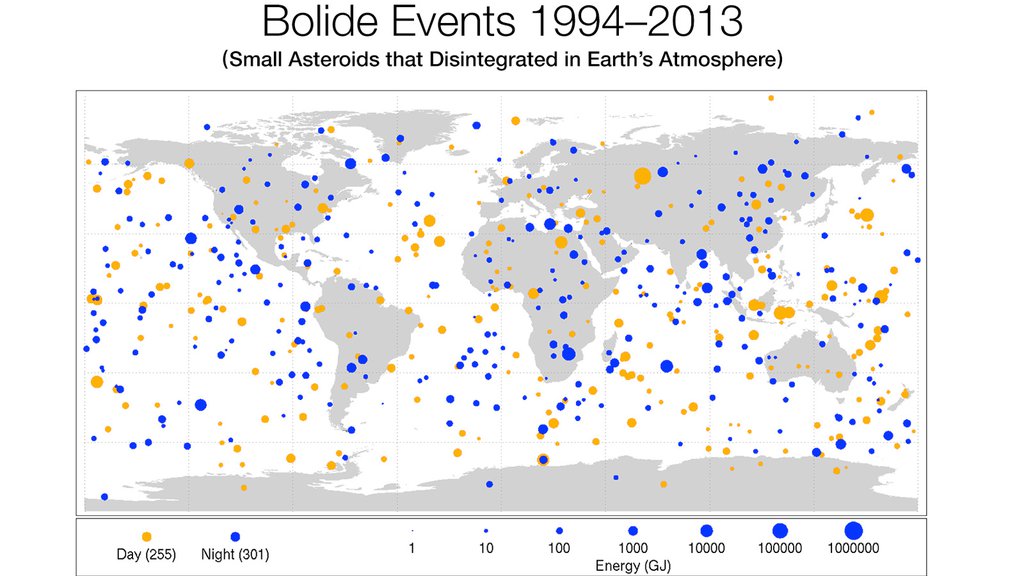 This diagram maps the data gathered from 1994-2013 on small asteroids impacting Earth's atmosphere to create very bright meteors, technically called "bolides" and commonly referred to as "fireballs".  Sizes of red dots (daytime impacts) and blue dots (nighttime impacts) are proportional to the optical radiated energy of impacts measured in billions of Joules (GJ) of energy, and show the location of impacts from objects about 1 meter (3 feet) to almost 20 meters (60 feet) in size.
Credit: Planetary Science

A new map from NASA's Near Earth Object Program reveals that small asteroids frequently enter and disintegrate in Earth's atmosphere with random distribution around the globe.

A map released today by NASA's Near Earth Object (NEO) Program reveals that small asteroids frequently enter and disintegrate in the Earth's atmosphere with random distribution around the globe. Released to the scientific community, the map visualizes data gathered by U.S. government sensors from 1994 to 2013. The data indicate that Earth's atmosphere was impacted by small asteroids, resulting in a bolide (or fireball), on 556 separate occasions in a 20-year period. Almost all asteroids of this size disintegrate in the atmosphere and are usually harmless. The notable exception was the Chelyabinsk event which was the largest asteroid to hit Earth in this period. The new data could help scientists better refine estimates of the distribution of the sizes of NEOs including larger ones that could pose a danger to Earth.

Finding and characterizing hazardous asteroids to protect our home planet is a high priority for NASA. It is one of the reasons NASA has increased by a factor of 10 investments in asteroid detection, characterization and mitigation activities over the last five years. In addition, NASA has aggressively developed strategies and plans with its partners in the U.S. and abroad to detect, track and characterize NEOs. These activities also will help identify NEOs that might pose a risk of Earth impact, and further help inform developing options for planetary defense.

The public can help participate in the hunt for potentially hazardous Near Earth Objects through the Asteroid Grand Challenge, which aims to create a plan to find all asteroid threats to human populations and know what to do about them. NASA is also pursuing an Asteroid Redirect Mission (ARM) which will identify, redirect and send astronauts to explore an asteroid. Among its many exploration goals, the mission could demonstrate basic planetary defense techniques for asteroid deflection.

For more information about the map and data, go to:

For details about ARM, and the Asteroid Grand Challenge, visit: