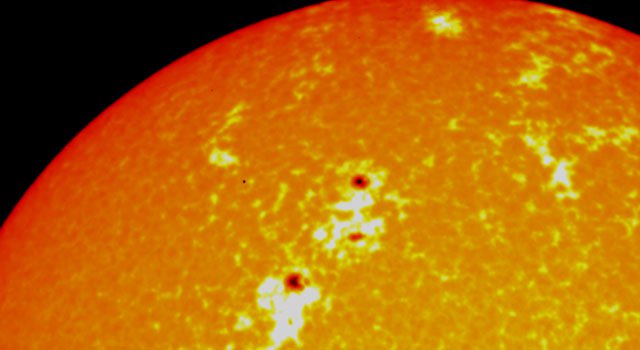 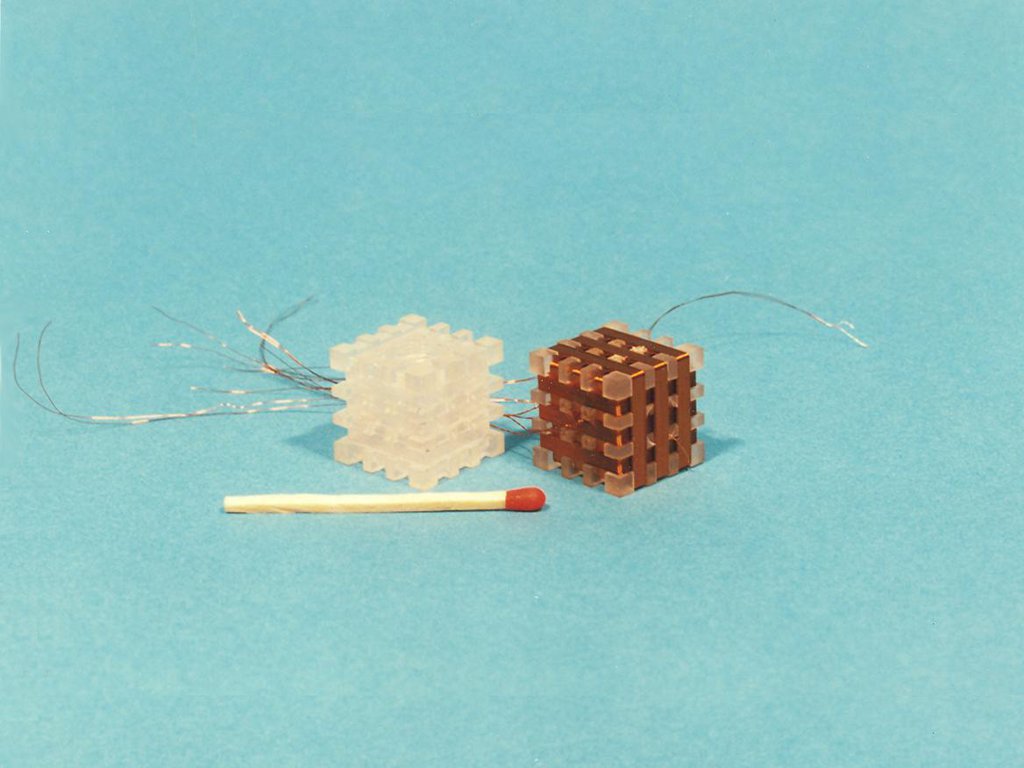 Small magnetometers like these measure magnetic strength on Earth and in the atmosphere to determine how much of the sun's magnetic energy has been transferred to Earth's magnetosphere. In 2009, that energy reached record lows. Images
Credit: Glassmeier, et al. 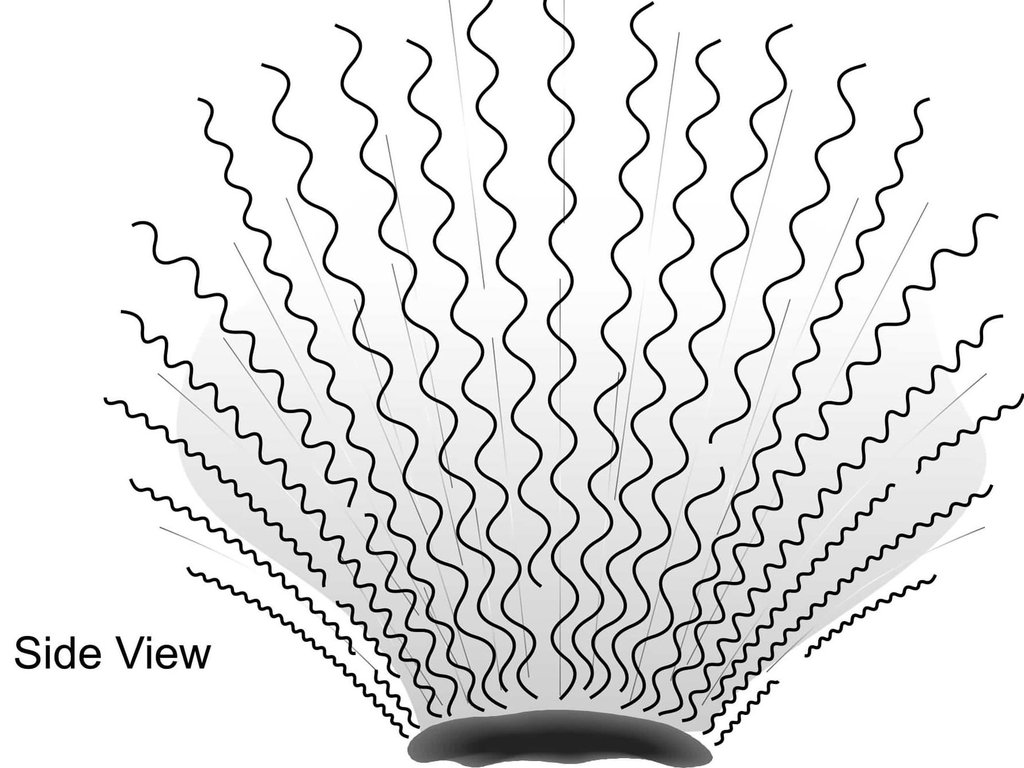 The magnetic fields from the center of coronal holes in the sun's atmosphere have large fluctuations known as Alfvén waves, while those from the sides have smaller fluctuations. The side fields do not transfer energy as well from the sun to Earth's magnetosphere.
Credit: NASA/Park

Since 1611, humans have recorded the comings and goings of black spots on the sun.

Since 1611, humans have recorded the comings and goings of black spots on the sun. The number of these sunspots waxes and wanes over approximately an 11-year cycle -- more sunspots generally mean more activity and eruptions on the sun and vice versa. The number of sunspots can change from cycle to cycle, and 2008 saw the longest and weakest solar minimum since scientists have been monitoring the sun with space-based instruments.

Observations have shown, however, that magnetic effects on Earth due to the sun, effects that cause the aurora to appear, did not go down in synch with the cycle of low magnetism on the sun. Now, a paper in Annales Geophysicae that appeared on May 16, 2011 reports that these effects on Earth did in fact reach a minimum -- indeed they attained their lowest levels of the century -- but some eight months later. The scientists believe that factors in the speed of the solar wind, and the strength and direction of the magnetic fields embedded within it, helped produce this anomalous low.

"Historically, the solar minimum is defined by sunspot number," says space weather scientist Bruce Tsurutani at NASA's Jet Propulsion Laboratory in Pasadena, Calif., who is first author on the paper. "Based on that, 2008 was identified as the period of solar minimum. But the geomagnetic effects on Earth reached their minimum quite some time later, in 2009. So we decided to look at what caused the geomagnetic minimum."

Geomagnetic effects basically amount to any magnetic changes on Earth due to the sun, and they're measured by magnetometer readings on the surface of the Earth. Such effects are usually harmless, with the only obvious sign of their presence being the appearance of auroras near the poles. However, in extreme cases, they can cause power grid failures on Earth or induce dangerous currents in long pipelines, so it is valuable to know how the geomagnetic effects vary with the sun.

Three things help determine how much energy from the sun is transferred to Earth's magnetosphere from the solar wind: the speed of the solar wind, the strength of the magnetic field outside Earth's bounds (known as the interplanetary magnetic field) and which direction it is pointing, since a large southward component is necessary to connect successfully to Earth's magnetosphere and transfer energy. The team -- which also included Walter Gonzalez and Ezequiel Echer of the Brazilian National Institute for Space Research in São José dos Campos, Brazil -- examined each component in turn.

First, the researchers noted that in 2008 and 2009, the interplanetary magnetic field was the lowest it had been in the history of the space age. This was an obvious contribution to the geomagnetic minimum. But since the geomagnetic effects didn't drop in 2008, it could not be the only factor.

To examine the speed of the solar wind, they turned to NASA's Advanced Composition Explorer (ACE), which is in interplanetary space outside the Earth's magnetosphere, approximately 1 million miles toward the sun. The ACE data showed that the speed of the solar wind stayed high during the sunspot minimum. Only later did it begin a steady decline, correlating to the timing of the decline in geomagnetic effects.

The next step was to understand what caused this decrease. The team found a culprit in something called coronal holes. Coronal holes are darker, colder areas within the sun's outer atmosphere. Fast solar wind shoots out the center of coronal holes at speeds up to 500 miles per second, but wind flowing out of the sides slows down as it expands into space.

"Usually, at solar minimum, the coronal holes are at the sun's poles," says Giuliana de Toma, a solar scientist at the National Center for Atmospheric Research whose research on this topic helped provide insight for this paper. "Therefore, Earth receives wind from only the edges of these holes, and it's not very fast. But in 2007 and 2008, the coronal holes were not confined to the poles as normal."

Those coronal holes lingered at low latitudes to the end of 2008. Consequently, the center of the holes stayed firmly pointed towards Earth, sending fast solar wind in Earth's direction. Only as they finally appeared closer to the poles in 2009 did the speed of the solar wind at Earth begin to slow down. And, of course, the geomagnetic effects and sightings of the aurora along with it.

Coronal holes seem to be responsible for minimizing the southward direction of the interplanetary magnetic field as well. The solar wind's magnetic fields oscillate on the journey from the sun to Earth. These fluctuations are known as Alfvén waves. The wind coming out of the centers of the coronal holes has large fluctuations, meaning that the southward magnetic component – like that in all the directions -- is fairly large. The wind that comes from the edges, however, has smaller fluctuations, and comparably smaller southward components. So, once again, coronal holes at lower latitudes would have a better chance of connecting with Earth's magnetosphere and causing geomagnetic effects, while mid-latitude holes would be less effective.

Knowing what situations cause and suppress intense geomagnetic activity on Earth is a step toward better predicting when such events might happen. To do so well, Tsurutani points out, requires focusing on the tight connection between such effects and the complex physics of the sun. "It's important to understand all of these features better," he says. "To understand what causes low interplanetary magnetic fields and what causes coronal holes in general. This is all part of the solar cycle. And all part of what causes effects on Earth."