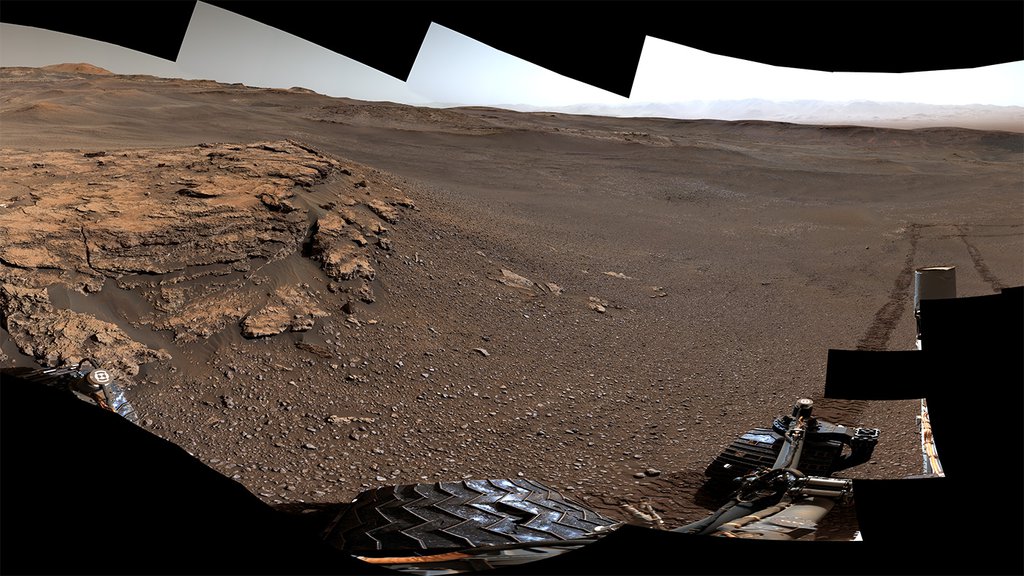 This panorama of a location called "Teal Ridge" was captured on Mars by the Mast Camera, or Mastcam, on NASA's Curiosity rover on June 18, 2019, the 2,440th Martian day, or sol, of the mission.› Full image and caption
Credit: NASA/JPL-Caltech/MSSS 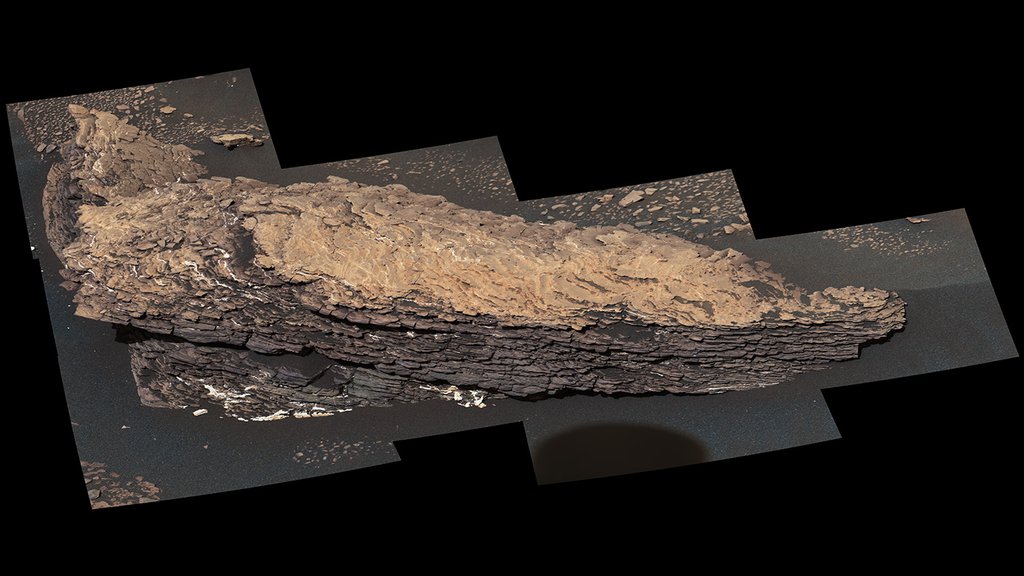 This mosaic of images shows a boulder-sized rock called "Strathdon," which is made up of many complex layers. NASA's Curiosity Mars rover took these images using its Mast Camera, or Mastcam, on July 9, 2019, the 2,461st Martian sol, or day, of the mission.› Full image and caption
Credit: NASA/JPL-Caltech/MSSS 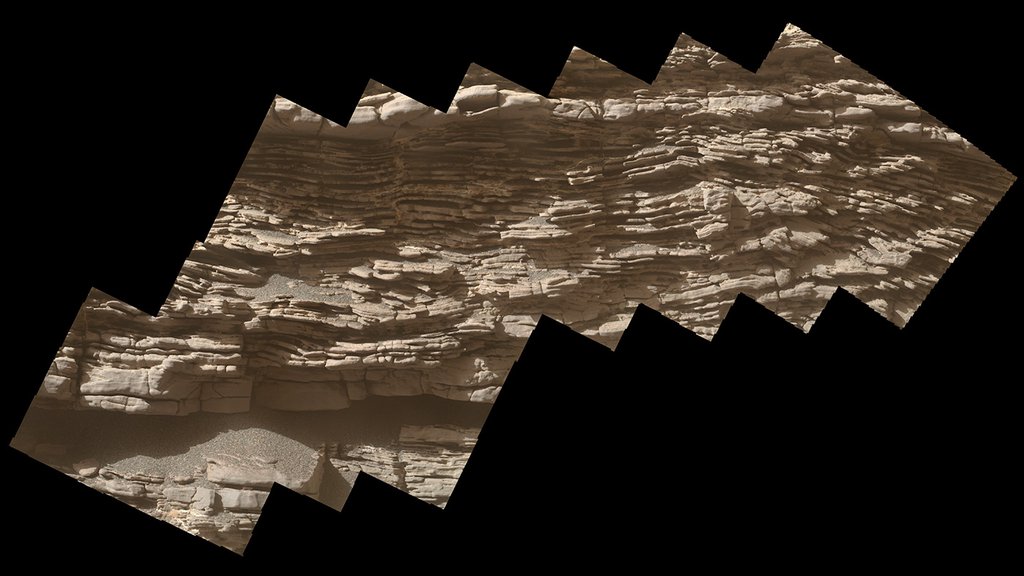 This mosaic of images shows layers of sediment on a boulder-sized rock called "Strathdon," as seen by the Mars Hand Lens Imager (MAHLI) camera carried by NASA's Curiosity rover. The images were taken on July 10, 2019, the 2,462nd Martian day, or sol, of the mission.› Full image and caption
Credit: NASA/JPL-Caltech/MSSS

NASA's Curiosity rover has come a long way since touching down on Mars seven years ago. It has traveled a total of 13 miles (21 kilometers) and ascended 1,207 feet (368 meters) to its current location. Along the way, Curiosity discovered Mars had the conditions to support microbial life in the ancient past, among other things.

And the rover is far from done, having just drilled its 22nd sample from the Martian surface. It has a few more years before its nuclear power system degrades enough to significantly limit operations. After that, careful budgeting of its power will allow the rover to keep studying the Red Planet.

Curiosity is now halfway through a region scientists call the "clay-bearing unit" on the side of Mount Sharp, inside of Gale Crater. Billions of years ago, there were streams and lakes within the crater. Water altered the sediment deposited within the lakes, leaving behind lots of clay minerals in the region. That clay signal was first detected from space by NASA's Mars Reconnaissance Orbiter (MRO) a few years before Curiosity launched.

"This area is one of the reasons we came to Gale Crater," said Kristen Bennett of the U.S. Geological Survey, one of the co-leads for Curiosity's clay-unit campaign. "We've been studying orbiter images of this area for 10 years, and we're finally able to take a look up close."

Rock samples that the rover has drilled here have revealed the highest amounts of clay minerals found during the mission. But Curiosity has detected similarly high amounts of clay on other parts of Mount Sharp, including in areas where MRO didn't detect clay. That's led scientists to wonder what is causing the findings from orbit and the surface to differ.

The science team is thinking through possible reasons as to why the clay minerals here stood out to MRO. The rover encountered a "parking lot full of gravel and pebbles" when it first entered the area, said the campaign's other co-lead, Valerie Fox of Caltech. One idea is that the pebbles are the key: Although the individual pebbles are too small for MRO to see, they may collectively appear to the orbiter as a single clay signal scattered across the area. Dust also settles more readily over flat rocks than it does over the pebbles; that same dust can obscure the signals seen from space. The pebbles were too small for Curiosity to drill into, so the science team is looking for other clues to solve this puzzle.

Curiosity exited the pebble parking lot back in June and started to encounter more complex geologic features. It stopped to take a 360-degree panorama at an outcrop called "Teal Ridge." More recently, it took detailed images of "Strathdon," a rock made of dozens of sediment layers that have hardened into a brittle, wavy heap. Unlike the thin, flat layers associated with lake sediments Curiosity has studied, the wavy layers in these features suggest a more dynamic environment. Wind, flowing water or both could have shaped this area.

Both Teal Ridge and Strathdon represent changes in the landscape. "We're seeing an evolution in the ancient lake environment recorded in these rocks," said Fox. "It wasn't just a static lake. It's helping us move from a simplistic view of Mars going from wet to dry. Instead of a linear process, the history of water was more complicated."

Curiosity is discovering a richer, more complex story behind the water on Mount Sharp - a process Fox likened to finally being able to read the paragraphs in a book - a dense book, with pages torn out, but a fascinating tale to piece together.