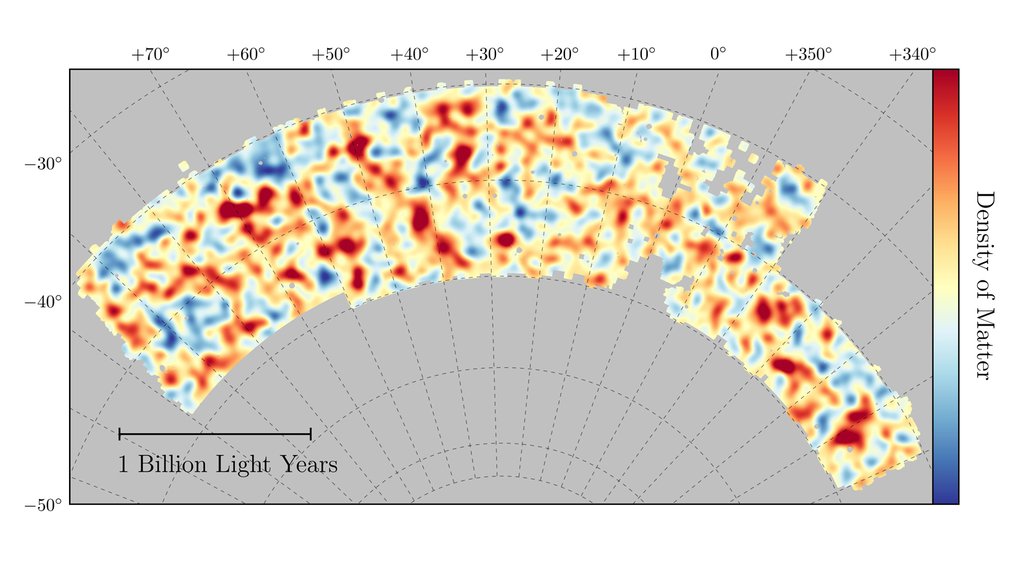 Map of dark matter made from gravitational lensing measurements of 26 million galaxies in the Dark Energy Survey. The map covers about 1/30th of the entire sky and spans several billion light years in extent. Red regions have more dark matter than average, blue regions less dark matter.
Credit: Chihway Chang/Kavli Institute for Cosmological Physics at the University of Chicago/DES Collaboration.

Three JPL scientists are part of the Dark Energy Survey, which is helping to further our understanding of the structure of the universe.

What is our universe made of, and has its composition changed over time? Scientists have new insights about these fundamental questions, thanks to an international collaboration of more than 400 scientists called the Dark Energy Survey (DES). Three scientists from NASA's Jet Propulsion Laboratory in Pasadena, California, are part of this group that is helping to further our understanding of the structure of the universe.

The advances in astrophysics from DES are crucial to preparations for two upcoming space missions that will probe similar questions about the nature of the universe: ESA's Euclid mission (which has significant NASA participation) and NASA's Wide-Field Infrared Survey Telescope mission, both expected to launch in the 2020s.

"With this study, we are showcasing what's going to be possible with these much more complex observatories," said Andres Plazas Malagon, a postdoctoral researcher at JPL, who helped characterize DES's Dark Energy Camera detectors and who is also involved in detector studies for WFIRST.

Now, the Dark Energy Survey has examined the composition of the recent universe. Remarkably, the new results are close to forecasts made from Planck measurements of the distant past, allowing scientists to understand more about how the universe has evolved over approximately 14 billion years. The findings were revealed in a presentation at the American Physical Society Division of Particles and Fields meeting at the U.S. Department of Energy's Fermi National Accelerator Laboratory in Batavia, Illinois.

"The Planck results have been the landmark constraints in cosmology. It is truly amazing that you have a model that describes the universe at 400,000 years old, and now we have a similarly precise measurement of the universe at 13 billion years [old] that agrees with the model," said JPL's Tim Eifler, who led the Dark Energy Survey analysis team that developed the science software for the interpretation of the results.

Scientists find that about 70 percent of the energy in the universe is contained in dark energy. About 25 percent is composed of the mysterious dark matter, with normal matter making up the remainder. All of this agrees with precise measurements made to date. So far, DES has found no evidence that the amount of dark energy has changed over time -- a finding that is consistent with Albert Einstein's idea of a "cosmological constant."

The results are especially important to the scientific community because they mark the first time that observations from the more recent universe -- the "adult" universe -- by a technique called gravitational lensing and galaxy clustering, have yielded results as precise as those from the cosmic microwave background radiation -- light from the "infant" universe.

"This is the crossover point where gravitational lensing and galaxy clustering measurements and surveys will be the primary driver of what we know about dark energy in the universe," said Eric Huff, a JPL researcher who invented a new method of extracting the weak lensing signal, enhancing the precision of the DES galaxy shape catalogs.

The results come from the first-year data set of the Dark Energy Survey, which uses a 570-megapixel camera mounted on the 4-meter Blanco telescope at the National Optical Astronomy Observatory's Cerro Tololo Inter-American Observatory in Chile. Its data are processed at the National Center for Supercomputing Applications at the University of Illinois at Urbana-Champaign.

The DES team developed new ways to detect the tiny lensing distortions of galaxy images. In the process, they created the largest guide to spotting dark matter in the cosmos ever drawn. The new dark matter map is 10 times the size of the one DES released in 2015 and continues to grow.

The DES collaboration will publish on a data set five times larger over the next two years.

"There is a feeling of true discovery in the collaboration. For the first time, we have the data and tools in hand to see whether Einstein's cosmological constant prevails. We are all excited to explore the physical nature of dark energy," Eifler said. "In particular we want to see if there are hints in the data that suggest modifying the laws of gravity on the largest scales in the universe."