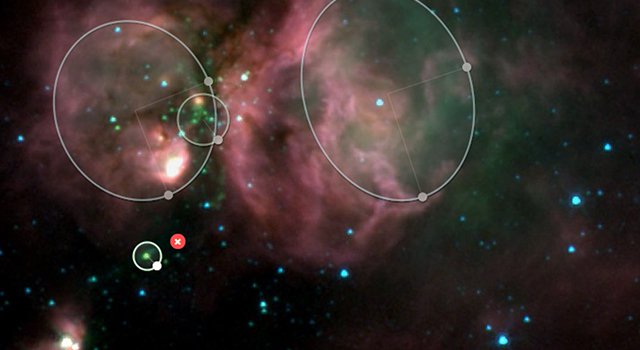 A screen shot from the Milky Way Project illustrates how users are asked to catalog objects in our galaxy.
Credit: Zooniverse

Take a stroll through a zoo of cosmic objects in the new, more expansive Milky Way Project.

Since 2010, about 50,000 volunteers have taken to their computers to help astronomers catalog star-blown bubbles captured in images from NASA's Spitzer Space Telescope. Their efforts resulted in several scientific papers, and a deeper understanding of our Milky Way galaxy and its frothy star-forming clouds.

Now, an updated version of the campaign, called the Milky Way Project, is releasing more images with a whole new set of "animals" to track in the cosmic zoo. Volunteers are asked to catalog a host of objects, including towering pillars of dust, bow shocks rammed into cosmic dust by speeding stars and even other galaxies hiding behind dust.

"Spitzer has made a hugely detailed survey of our galaxy so expansive you can't take it all in at once," said Robert Hurt, an imaging specialist at NASA's Spitzer Science Center at the California Institute of Technology, Pasadena, Calif. "This project guarantees that every pixel will be seen by many people. No corner will go unexplored."

The Milky Way Project is part of the Zooniverse group, a collection of online citizen science activities. The idea is to recruit volunteers from all walks of life, all over the world, to help tackle big science problems, and learn something in the process.

The Spitzer images were taken as part of the mission's GLIMPSE project, which stands for Galactic Legacy Infrared Mid-Plane Survey Extraordinaire. GLIMPSE and its follow-up surveys have mapped out a strip of sky all around us, covering most of our Milky Way galaxy. Spitzer's infrared vision allows it to cut through the dust, unveiling cosmic creatures that remain unseen in visible-light views.

If you'd like to join the cosmic safari, visit: http://www.milkywayproject.org .