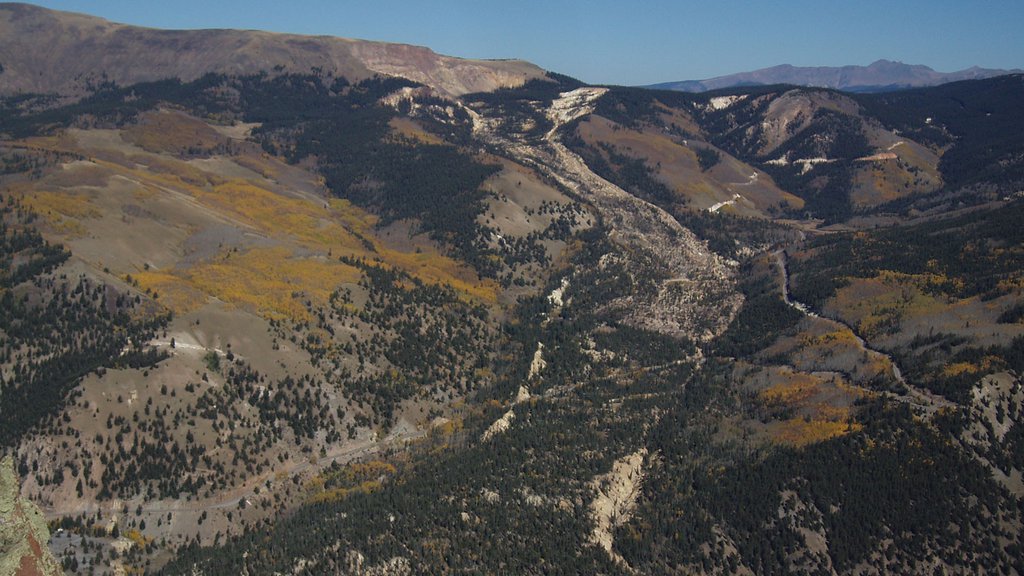 This image shows the Slumgullion Landslide in southwestern Colorado. The central area above the highway moves almost an inch per day; the lower part moves much more slowly.
Credit: Bill Schulz/USGS 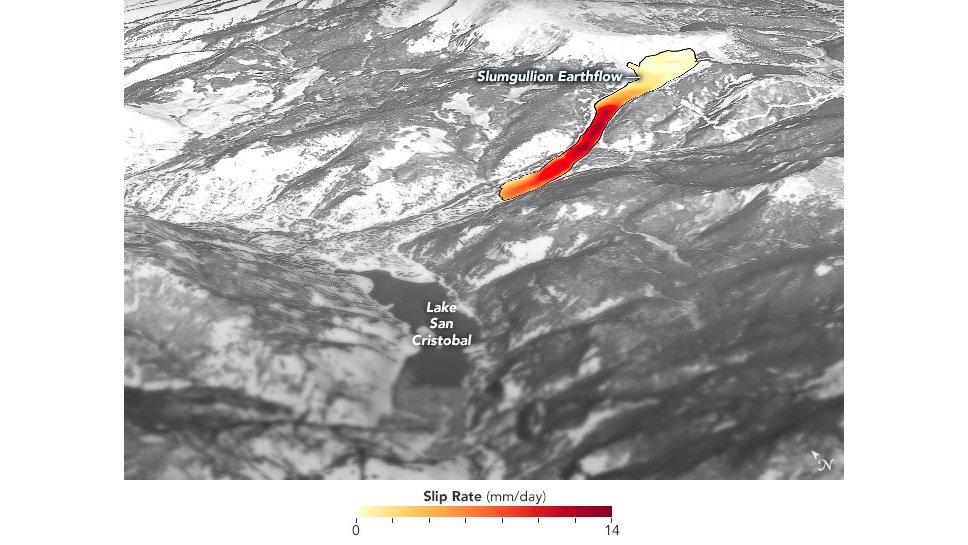 This map shows where, how quickly and in which direction Colorado's Slumgullion landslide is moving based on remote-sensing data acquired from 2011-2018. Little movement was detected in the areas in yellow. Orange and red areas moved up to 14 millimeters (0.56 inches) per day.
Credit: NASA Earth Observatory 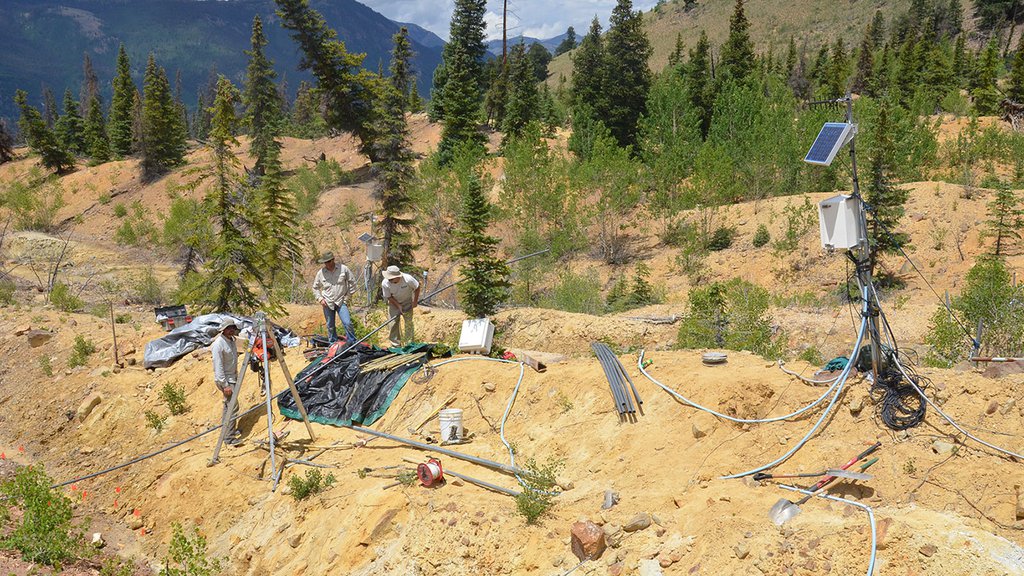 USGS scientists install borehole displacement sensors at the Slumgullion landslide in southwestern Colorado. Data from the sensors were used in the development of a new framework for predicting landslide hazards.
Credit: USGS

Landslides cause loss of life and billions of dollars in damage each year. The ability to predict them accurately can reduce both.

Slow-moving landslides, places where the land creeps sluggishly downhill over long periods of time, are relatively stable - until they aren't. When they become unstable, which can happen for a variety of reasons - including heavy rain, snowmelt, earthquakes and volcanic activity - landslides can quickly turn catastrophic, especially in populated areas.

"It's important to understand how landslides work and how they respond to environmental changes so that we can better predict when they might transition from this gradual motion to a more rapid, catastrophic failure," said NASA Jet Propulsion Laboratory scientist Eric Fielding, coauthor of a new study focused on just that.

Because landslides are often inaccessible and don't respond uniformly to changes, they can be difficult to predict. But the study team, which includes collaborators from the University of California, Berkeley and the U.S. Geological Survey (USGS), has developed a new technique to make prediction both easier and more accurate.

UAVSAR, or Uninhabited Aerial Vehicle Synthetic Aperture Radar, is attached to the bottom of an airplane. When the plane flies over a specific area, the instrument measures the ground level with extreme accuracy. When it flies over that same area again, scientists can glean how much and in which direction the land has moved since the previous flyover. Because it's attached to a plane, rather than a satellite like some similar instruments, scientists can design flight plans to perform multiple passes precisely over the same area in a short amount of time.

The study team centered their research on the 2.5-mile-long (4-kilometer-long) Slumgullion landslide in southwestern Colorado. In motion for well over a century, this landslide provides an ideal natural laboratory for studying the dynamics of slow-moving landslides. They acquired data from multiple UAVSAR flights over Slumgullion each year between 2011 and 2018 and incorporated this data into their new mapping framework.

"By flying over this landslide multiple times, in different directions at perpendicular angles, we had sufficient data to reconstruct the full three-dimensional motion in very clear detail as well as how it varies over the years," said Fielding.

Although UAVSAR doesn't measure deformation at depth directly, the study team integrated the instrument's 3D data into their new mapping process, which enabled them to model the various depths and movements of the slide. Depth is a significant factor in determining when and where a landslide is likely to become unstable.

According to coauthor Bill Schulz of the USGS, most of the action happens at the bottom of the landslide, with everything sliding on a thin shear zone that may be only a few centimeters thick. Because the depth can vary greatly across a single landslide, different parts of the slide will respond to changes in pressure at different times.

"Groundwater pressure - from rain and snowmelt, for example - changes first right at the ground surface and last at the bottom of a landslide," said Schulz. "So if one area of a landslide is half as deep as another, the area that's half as deep will respond first to the change in pressure." The new framework takes this critical depth information into account.

In addition to its bigger-picture implications for improving the forecasting of catastrophic landslide hazards, the study provided insights specific to Slumgullion.

"We found that the central part of this landslide moves quickly - about an inch per day, every day. But in observing all of the data over time, we see that the top and bottom parts are moving, too, just far more slowly," said Fielding. "We also found that the uppermost part of the landslide responds most quickly to spring snowmelt and that the central part responds significantly to annual variation - drought years versus wet years."

Overall, the new framework can be used to improve the accuracy of landslide forecasting and in turn, enable land managers and relevant authorities to better mitigate landslide risks, potentially saving lives.

The study was published Wednesday in Nature Communications.