NEOWISE Spots a Comet That Looked Like an Asteroid 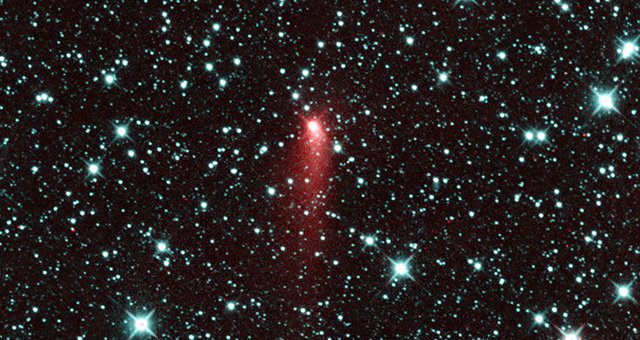 Comet C/2013 UQ4 (Catalina) appeared to be a highly active comet one day past perihelion on July 7, 2014.› Full image and caption
Credit: NASA/JPL-Caltech 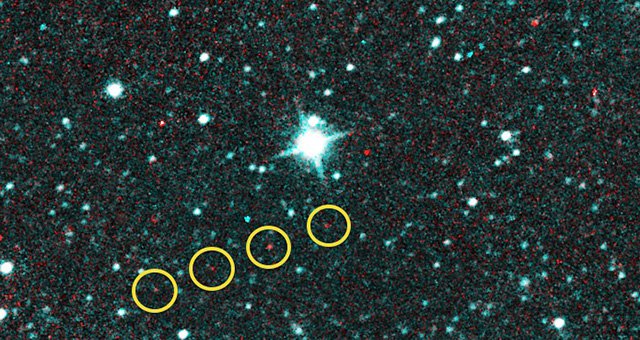 Comet C/2013 UQ4 (Catalina) was originally thought to be an asteroid, but observations by NASA's NEOWISE spacecraft indicate that it's a comet.

Comet C/2013 UQ4 (Catalina) has been observed by NASA's Near-Earth Object Wide-field Infrared Survey Explorer (NEOWISE) spacecraft just one day after passing through its closest approach to the sun. The comet glows brightly in infrared wavelengths, with a dust tail streaking more than 62,000 miles (100,000 kilometers) across the sky. Its spectacular activity is driven by the vaporization of ice that has been preserved from the time of planet formation 4.5 billion years ago.

"The tail forms a faint fan as the smaller dust particles are more easily pushed away from the sun by the radiation pressure of the sunlight," said James Bauer, researcher at NASA's Jet Propulsion Laboratory in Pasadena, California.

C/2013 UQ4 takes more than 450 years to orbit the sun once and spends most of its time far away at very low temperatures. Its orbit is also retrograde, which means that the comet moves around the sun in the opposite direction to the planets and asteroids.

The comet was originally thought to be an asteroid, as it appeared inactive when discovered by the Catalina Sky Survey on October 23, 2013. NEOWISE also observed the comet to be inactive on New Year's Eve, 2013, but since then the comet has become highly active, allowing astronomers around the world to observe it. The comet's activity should decline as it once again returns to the cold recesses of space.