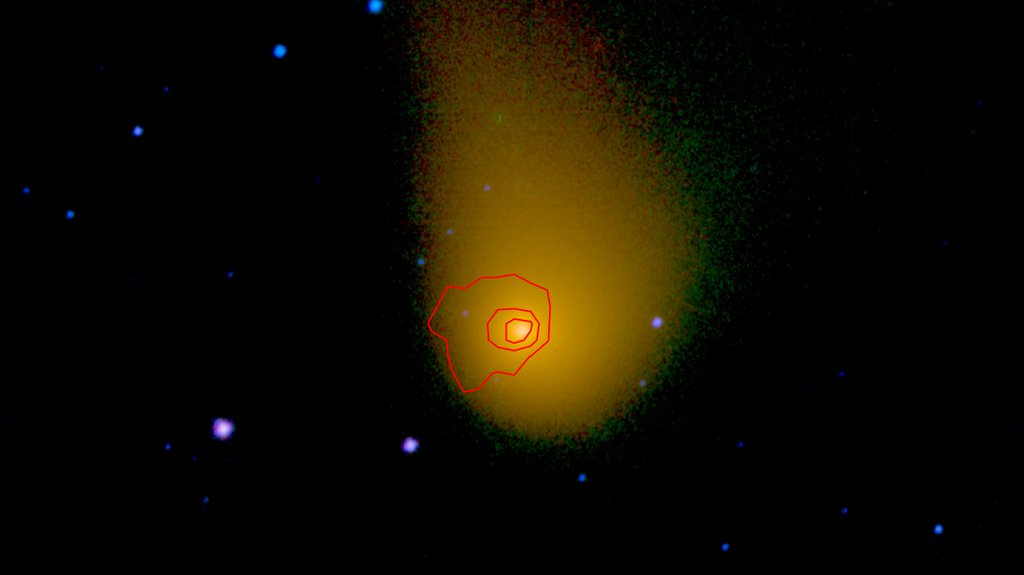 An expanded view of comet C/2006 W3 (Christensen) is shown here. The WISE spacecraft observed this comet on April 20th, 2010 as it traveled through the constellation Sagittarius.› Full image and caption
Credit: NASA/JPL-Caltech

After its launch in 2009, NASA's NEOWISE spacecraft observed 163 comets during the WISE/NEOWISE prime mission. This sample from the space telescope represents the largest infrared survey of comets to date. Data from the survey are giving new insights into the dust, comet nucleus sizes, and production rates for difficult-to-observe gases like carbon dioxide and carbon monoxide. Results of the NEOWISE census of comets were recently published in the Astrophysical Journal.

Carbon monoxide (CO) and carbon dioxide (CO2) are common molecules found in the environment of the early solar system, and in comets. In most circumstances, water-ice sublimation likely drives the activity in comets when they come nearest to the sun, but at larger distances and colder temperatures, other common molecules like CO and CO2 may be the main drivers. Spaceborne carbon dioxide and carbon monoxide are difficult to directly detect from the ground because their abundance in Earth's own atmosphere obscures the signal. The NEOWISE spacecraft soars high above Earth's atmosphere, making these measurements of a comet's gas emissions possible.

"This is the first time we've seen such large statistical evidence of carbon monoxide taking over as a comet's gas of choice when they are farther out from the sun," said James Bauer, deputy principal investigator of the NEOWISE mission from NASA's Jet Propulsion Laboratory in Pasadena, California, and author of a paper on the subject. "By emitting what is likely mostly carbon monoxide beyond four astronomical units (4 times the Earth-Sun distance; about 370 million miles, 600 million kilometers) it shows us that comets may have stored most of the gases when they formed, and secured them over billions of years. Most of the comets that we observed as active beyond 4 AU are long-period comets, comets with orbital periods greater than 200 years that spend most of their time beyond Neptune's orbit."

While the amount of carbon monoxide and dioxide increases relative to ejected dust as a comet gets closer to the sun, the percentage of these two gases, when compared to other volatile gases, decreases.

"As they get closer to the sun, these comets seem to produce a prodigious amount of carbon dioxide," said Bauer. "Your average comet sampled by NEOWISE would expel enough carbon dioxide to provide the bubble power for thousands of cans of soda per second."

The NEOWISE mission hunts for near-Earth objects using the Wide-field Infrared Survey Explorer (WISE) spacecraft. Funded by NASA's Planetary Science division, the NEOWISE project uses images taken by the spacecraft to look for asteroids and comets, providing a rich source of measurements of solar system objects at infrared wavelengths. These measurements include emission lines that are difficult or impossible to detect directly from the ground.