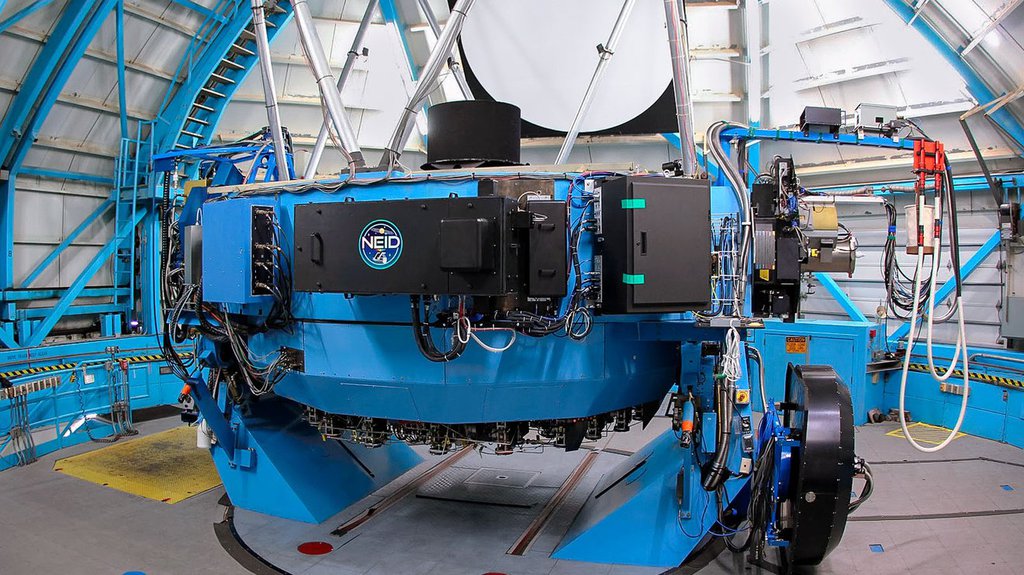 Radial velocity is a method for finding planets around other stars by looking for the gravitational tug of those planets on their parent stars. NEID, shown here mounted on the 3.5-meter WIYN telescope at the Kitt Peak National Observatory, is a cutting edge-radial velocity instrument.

A new NASA instrument will look for planets by detecting subtle wobbles from their parent stars. To prepare, it will study the Sun.

As NASA expands its quest to discover exoplanets – planets beyond our solar system – it also grows its toolbox. Over the summer, a new tool called NEID (pronounced NOO-id) delivered its first batch of data on the nearest and best-studied star, our Sun.

The NEID spectrometer, which will help locate and characterize new worlds, observes the sky from Kitt Peak National Observatory in Arizona. It began its search for exoplanets in earnest in June. However, NEID will collect nearly as much data from the Sun during the day as it does from the stars at night. That’s because the Sun provides astronomers with their most detailed look at the kinds of changes that occur on the host stars of exoplanets, changes that may impact the detection and habitability of these alien worlds.

A team at NASA’s Goddard Space Flight Center in Greenbelt, Maryland, led by Michael McElwain, supported NEID’s design, development, and commissioning. NEID was funded by NASA’s Exoplanet Exploration Program, managed by the agency’s Jet Propulsion Laboratory in Southern California. The instrument measures radial velocity, the shift in a star’s motion caused by the gravitational tug of its planets. This motion slightly alters the star’s light. Radial velocities give astronomers a measurement of a planet’s mass relative to its host star. 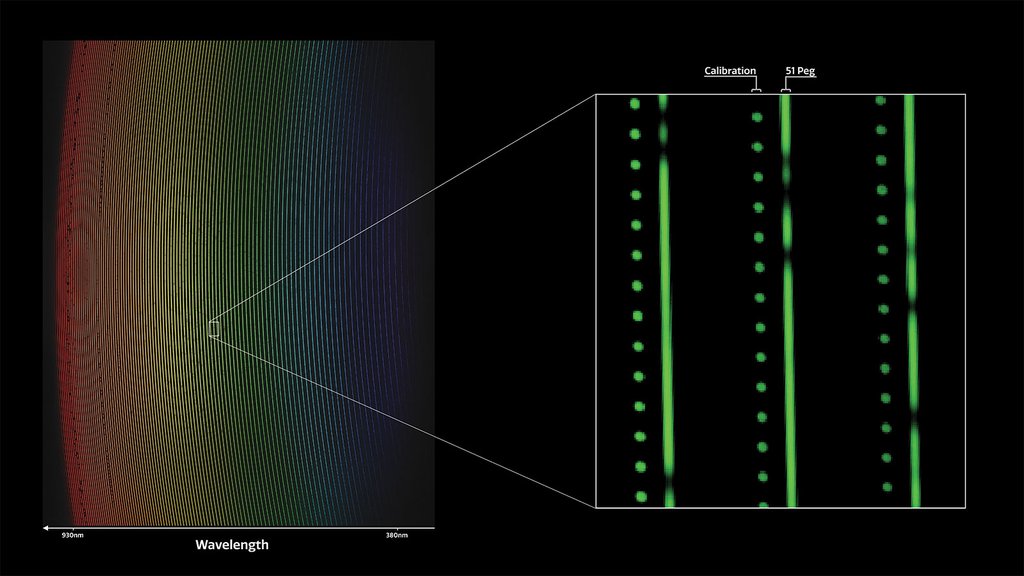 The light of the star 51 Pegasi is spread out to reveal individual wavelengths, or colors, (left). A zoomed-in section (right) shows gaps that reveal the presence of specific chemical elements. Called spectroscopy, this technique is a key step in the NEID instrument’s search for exoplanets.

“What’s really critical for these planets is knowing their masses,” said McElwain, an instrument scientist for the NEID development team. “When you know the size and the mass, that provides two fundamental parameters for these exoplanets.”

Currently, the transit technique is the main way scientists discover exoplanets and measure their relative sizes. Scientists can detect an exoplanet by hunting for periodic changes in the light of nearby stars, which occur when an orbiting planet crosses the star’s face from our viewpoint.

Together, these size and mass measurements can be used to determine a planet’s bulk density, which gives scientists insight into the planet’s overall makeup. An especially dense planet, for example, could have a rocky composition. Scientists will use that information to determine which planets are best suited for additional study by NASA’s upcoming James Webb Space Telescope.

The spectrometer operates on the WIYN 3.5-meter telescope at Kitt Peak, and it belongs to a new class of radial velocity instruments that can achieve precision about three times better than ever before possible. The telescope will point at a star, collecting its light and feeding it through an optical fiber that carries it into the spectrograph, which is housed in a specially built, thermally isolated clean room on the bottom floor of the observatory.

“A spectrograph, at its most basic level, splits light into its various colors, or what we call wavelengths,” said Sarah Logsdon, the instrument scientist for NEID and an assistant scientist at the National Science Foundation’s (NSF) NOIRLab, a national center for ground-based astronomy headquartered in Tucson, Arizona. “That’s really useful to us because individual atoms and molecules have different emission or absorption at very specific wavelengths. With NEID, we can measure how much these absorption and emission lines shift relative to their rest position as a planet tugs on its star.” The size of that shift allows astronomers to determine the mass of the planet relative to the mass of its star.

One potential challenge to NEID’s observations is that the stars themselves can change. Hot plasma bubbles up from their interiors, cools, and falls back, while the whole surface quivers with seismic oscillations. Global and local magnetic fields create darker, cooler starspots and other visible features. All this activity makes it difficult to differentiate between stellar activity and the effects of exoplanets.

However, the Sun serves as a baseline to better understand stellar activity. In addition to taking light from the WIYN telescope, NEID will also receive light from a solar telescope mounted to the observatory’s roof. Over time, this solar data will help scientists identify similar events in their observations of more distant stars. After being processed to aid astronomers researching the issue of stellar activity, all data from the solar telescope is made public, with the first set of solar data released in June 2021.

“The Sun points the way,” said Suvrath Mahadevan, a professor of astronomy and astrophysics at Penn State University and the principal investigator of NEID. “For decades, the iconic and now-decommissioned McMath Pierce telescope at Kitt Peak was the premier facility for studying the Sun. NEID is now the bridge that connects exoplanet science to solar observations, the Sun to the stars, and a bridge that connects Kitt Peak’s history to its present and future.”

The NEID team announced NEID’s first-light observations in January 2020. NEID observed 51 Pegasi, the first Sun-like star found to host an exoplanet. NEID is now available for use by the scientific community through its guest observing program.

NEID is funded by a partnership between NASA and NSF called NN-EXPLORE (the NASA-NSF Exoplanet Observational Research partnership), which is managed by JPL. The partnership stemmed from a recommendation in the 2010 Astronomy and Astrophysics Decadal Survey calling for a program of ground-based radial velocity surveys. NEID is short for NN-EXPLORE Exoplanet Investigations with Doppler spectroscopy, but the name also draws on a word that roughly translates as “to see” in the language of the Tohono O’odham Nation, which includes Kitt Peak.

“This was a tremendous team effort, and I’m really proud of this instrument and what it’s capable of observing,” McElwain said.

The NEID spectrograph was built at Penn State. NSF’s National Optical-Infrared Astronomy Research Laboratory (NOIRLab) was responsible for modifications to the WIYN 3.5-meter telescope to accommodate NEID. The telescope port adapter design was led by NOIRLab and was constructed at the University of Wisconsin. Additional NEID participants include Carleton College, the National Institute for Standards and Technology, the University of California Irvine, the University of Colorado, and Macquarie University.

More information on NEID can be found here: https://neid.psu.edu/