This animated set of three images depicts asteroid 2012 DA14 as it was seen on Feb. 14, 2013, at a distance of 465,000 miles (748,000 kilometers). The animation was created by astronomers at the Remanzacco Observatory in Italy using observations obtained remotely from the Faulkes Telescope South in Siding Springs, Australia. Image› Full image and caption
Credit: LCOGT/Faulkes 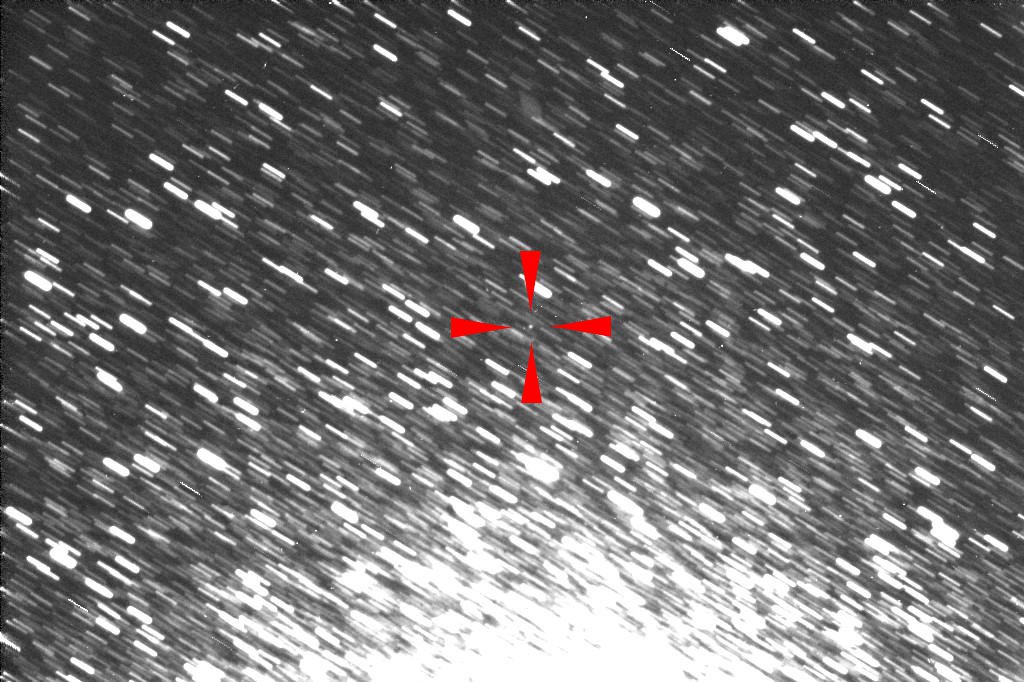 This image from D. Herald of Murrumbateman, Australia, shows the asteroid 2012 DA14 as a tiny speck in the center of the field of view. It was taken just past midnight on Feb. 13, 2013 in Australia (the morning of Feb. 12 in the U.S.), as it headed towards its closest approach to Earth on Feb. 15.› Full image and caption
Credit: D. Herald

Asteroid 2012 DA14, set to make its closest approach to Earth on Feb. 15, is captured in early images from Australia.

Like trailers for the coming attraction, new images show asteroid 2012 DA14 on its way to a record-close approach to Earth on Feb. 15. One image, taken by amateur astronomer Dave Herald of Murrumbateman, Australia, on Feb. 13, shows the asteroid as a tiny white dot in the field of view. Another set of animated images, obtained by the Faulkes Telescope South in Siding Springs, Australia, on Feb. 14, and animated by the Remanzacco Observatory in Italy, shows the asteroid as a bright spot moving across the night sky.

These are some of many images that may be taken of the asteroid during its close - but safe - encounter with Earth. It will be observed by numerous optical observatories worldwide in an attempt to determine its rough shape, spin rate and composition. NASA scientists will use NASA's Goldstone Solar System Radar, located in California's Mojave Desert, to take radar images of the asteroid to determine its precise size and shape on Feb. 16, 18, 19 and 20. The NASA Near Earth Object Observation (NEOO) Program will continue to track the asteroid and predict its future orbit.

Asteroid 2012 DA14 is about 150 feet (45 meters) in diameter. It is expected to fly about 17,200 miles (27,000 kilometers) above Earth's surface at the time of closest approach, which is about 11:25 a.m. PST (2:25 p.m. EST) on Feb. 15. This distance is well away from Earth and the swarm of low Earth-orbiting satellites, including the International Space Station, but it is inside the belt of satellites in geostationary orbit (about 22,200 miles, or 35,800 kilometers, above Earth's surface.) The flyby of 2012 DA14 is the closest-ever predicted approach to Earth for an object this large.

The NASA Near Earth Object Observation (NEOO) Program detects and tracks asteroids and comets passing close to Earth using ground- and space-based telescopes. The network of projects supported by this program, commonly called "Spaceguard," discovers these objects, characterizes a subset of them and plots their orbits to determine if any could be potentially hazardous to our planet.

The Near-Earth Object Program Office at JPL manages the technical and scientific activities for NASA's Near-Earth Object Observation Program of the Science Mission Directorate in Washington. JPL is a division of the California Institute of Technology in Pasadena. The NEOO Program Office performs more precise orbit determination on the objects, and predicts whether any will become an impact hazard to the Earth, or any other planet in the solar system.

More information is available at: http://www.nasa.gov/topics/solarsystem/features/asteroidflyby.html .