Nature Pulls a Fast One on Astronomers 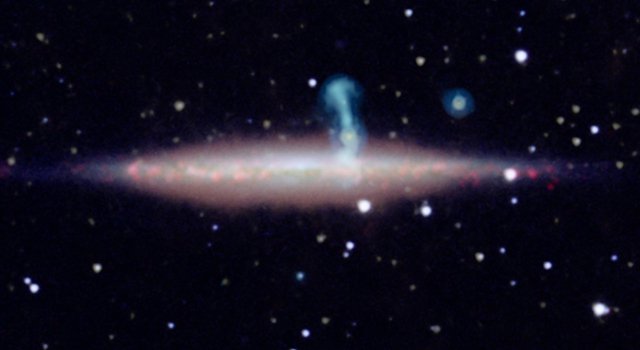 Two galaxies have been caught masquerading as one, in a new image that includes data from NASA's Spitzer and WISE missions.

What might look like a colossal jet shooting away from a galaxy turns out to be an illusion. New data from the National Science Foundation's Karl G. Jansky Very Large Array (VLA) reveal that two galaxies, one lying behind the other, have been masquerading as one.

In a new image highlighting the chance alignment, radio data from the VLA are blue and infrared observations from NASA's Spitzer Space Telescope and Wide-field Infrared Survey Explorer (WISE) are yellow and orange, respectively. Visible data are also shown, with starlight in purplish blue and heated gas in rose.

Earlier radio images of the two galaxies appeared as one fuzzy blob, and fooled astronomers into thinking they were looking at one galaxy. Thanks to the VLA pulling the curtain back on the disguised duo, the scientists have a unique opportunity to learn otherwise-unobtainable facts about the nearer galaxy.

"We can use the radio waves from the background galaxy, coming through the nearer one, as a way to measure the properties of the nearer galaxy," said Judith Irwin, of Queen's University, Canada, lead author of a recent paper on the findings, appearing online Nov. 15 in the Astronomical Journal.

Observations from Spitzer and WISE helped to reveal new structures above and below the plane of the closer galaxy's disk. For example, Spitzer helped confirm an arc-like feature rising more than 11,000 light-years above the disk, which was seen in the radio observations.

Irwin worked with an international team of astronomers from North America, India and Europe who are part of the "Continuum Halos in Nearby Galaxies -- an EVLA Survey" (CHANG-ES) consortium.

JPL manages and operates the WISE mission for NASA's Science Mission Directorate. The WISE mission was selected competitively under NASA's Explorers Program managed by the agency's Goddard Space Flight Center in Greenbelt, Md. The science instrument was built by the Space Dynamics Laboratory in Logan, Utah. The spacecraft was built by Ball Aerospace & Technologies Corp. in Boulder, Colo. Science operations and data processing take place at the Infrared Processing and Analysis Center at Caltech. Caltech manages JPL for NASA. More information is online at http://www.nasa.gov/wise and http://wise.astro.ucla.edu and http://www.jpl.nasa.gov/wise .