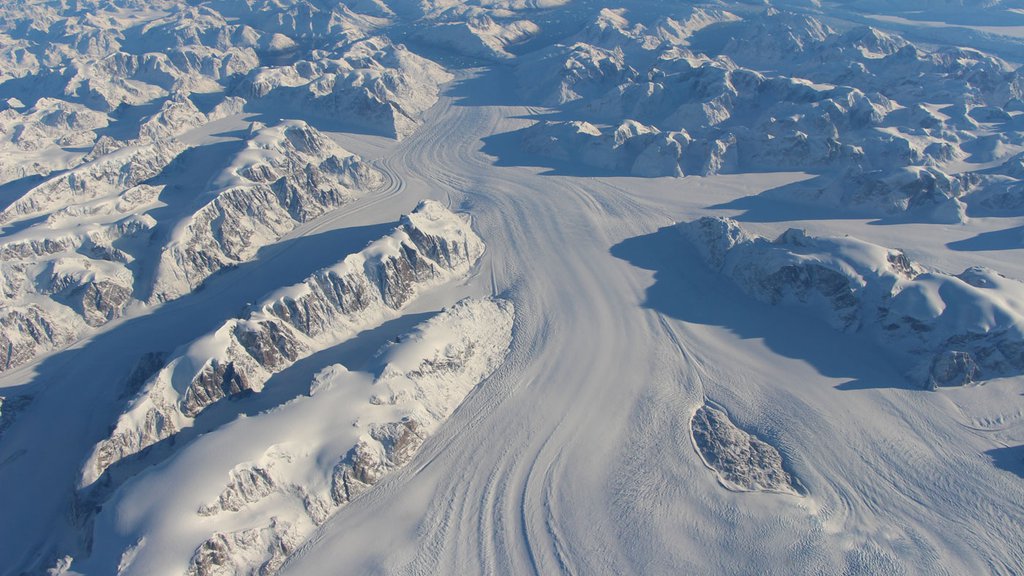 The texture on the surface of flowing ice, such as Heimdal Glacier in southern Greenland, allows Landsat 8 to map nearly all the flowing ice in the world.
Credit: NASA/John Sonntag

Glaciers and ice sheets move in unique patterns, as evidenced by a new capability that uses satellites to map ice flow speeds in Greenland, Antarctica and mountain ranges.

Glaciers and ice sheets move in unique and sometimes surprising patterns, as evidenced by a new capability that uses satellite images to map the speed of flowing ice in Greenland, Antarctica and mountain ranges around the world.

With imagery and data from Landsat 8, a joint mission of NASA and the U.S. Geological Survey, scientists are providing a near-real-time view of every large glacier and ice sheet on Earth. The NASA-funded Global Land Ice Velocity Extraction project, called GoLIVE, is a collaboration between scientists from the University of Colorado, the University of Alaska, and NASA's Jet Propulsion Laboratory in Pasadena, California. It aims to better understand how ice flow is changing worldwide -- and its impact on sea level.

"We are now able to map how the skin of ice is moving," said Ted Scambos, senior research scientist at the National Snow and Ice Data Center at the University of Colorado Boulder, and the Colorado lead for the GoLIVE project. He and his colleagues are releasing new results from the project at the American Geophysical Union's Fall Meeting in San Francisco. "From now on, we're going to be able to track all of the different types of changes in glaciers -- there's so much science to extract from the data."

With a near-real-time view of how glaciers and ice sheets are moving, researchers can integrate information about atmosphere and ocean conditions to determine what causes these ice sheets to change -- and what that means for how much ice is flowing into the ocean. That could help provide critical information to coastal communities that will be most impacted by rising oceans.

"We can use the method to identify which areas to keep an eye on, or which events might lead to a rapid change," Scambos said.

To map the ice, the GoLIVE team has written software that is able to follow the surface's subtle features, like bumps or a dune-like pattern, as they flow toward the ocean. The Landsat 8 satellite collects images of Earth's entire surface every 16 days. By comparing images taken from the same location, but at different times, the researchers use their software to track the features and determine the speed.

Several new capabilities of Landsat 8 enable researchers to generate these global maps. The satellite can take 700 images a day -- far more than its predecessors -- which means it captures nearly every scene over land, every day, in all the sunlit parts of its orbit. Previous Landsat satellites often did not have the capacity to collect frequent data over remote sites like Antarctica. The imaging system on Landsat 8 is also far more sensitive than past Landsat sensors, allowing it to distinguish far more subtle differences in shading and surface texture. This, plus faster and more precise software, has revolutionized the extent to which ice flow speed can be mapped. These features will be continued in the Landsat 9 satellite, scheduled for launch in 2020.

In Alaska, for example, researchers can observe surging glaciers in almost real time, said scientist Mark Fahnestock of the University of Alaska, Fairbanks. Often glaciers in Alaska and the Yukon are so remote that speedup events can go unnoticed for months, until a pilot flying over the region reports disrupted ice, he said.

"By measuring ice flow all the time, we can identify a surge as it starts, providing an entirely new way to follow this phenomenon," he said. "We can also follow large seasonal swings in tidewater glaciers, as they respond to their environment."

Scientists need to see all of this variability in order to identify trends that we need to worry about," Fahnestock said. The speed of the glacier, combined with other information such as elevation change from NASA's Operation IceBridge campaign and other sources, provide researchers in Alaska with a better sense of the entire picture of changing ice.

Twila Moon, a research scientist at the University of Bristol in the United Kingdom, uses the global maps to expand the research she does on Greenland glaciers. With the new database, she can study the movements of more than 240 glaciers, which comprise nearly all of the outlets from the ice sheet. Several glaciers in northwest Greenland have had accelerated speed in the last few years, while she saw some glaciers in the southeast experience a large jump in speed, followed by a plateau.

With Landsat 8 making a pass every 16 days, she can also measure seasonal changes. Most glaciers go in cyclic patterns throughout the year, but even those vary. While most speed up in the warmer summer months, Moon has found several that slow down dramatically in the mid- to late-summer. The Heimdal Glacier in southeast Greenland, for example, can move more than 33 feet (10 meters) per day in early summer, then drop to less than 20 feet (6 meters) per day by August or September.

"We can group these glaciers by looking at the similarities in their behavior," Moon said. "It's providing an opportunity to get at the underlying drivers of why they change."

With measurements of what the seasonal shifts do to glacier speed, scientists can extrapolate what will happen to those glaciers as global temperatures continue to climb, she said. With fast-moving glaciers ending in the ocean, these studies can help scientists estimate how much new ice and water enter the Arctic Ocean. That new water can have both global and local impacts, changing the local ecosystems and ocean flow patterns and raising sea level.

"We're approaching a point where we have enough detailed information at different locations that we can start to answer important questions about what makes glaciers tick," Moon said.

Scientists are working with the new Landsat data to better understand how different environmental changes in the atmosphere and ocean impact flowing ice, said Alex Gardner, a JPL research scientist. The Landsat 8 images, combined with earlier Landsat satellites reaching back to the 1980s, give researchers decades' worth of imagery to investigate these links.

"The question is, how sensitive are these ice sheets to changes in the atmosphere and the ocean?" Gardner said. "We could wait and see, or we could look to the past to help inform what is most likely to happen in the future."

Gardner combines the detailed Antarctic ice cover seen by Landsat 8 with an earlier continental mapping of glacier flow based on radar data. By piecing the data together, he is working to understand decadal changes in ice flow for the entirety of the Antarctic ice sheet.

Tracking the changes in speed in Antarctica is key because of the sheer size of the ice sheet and its potential to contribute to future changes in sea level. Almost 480 cubic miles (2,000 cubic kilometers) of ice flows into the surrounding ocean each year.

"Seemingly small changes in ice speed on some of these very large glaciers can have a real impact," Gardner said.

Gardner and his colleagues have also mapped the glaciers in Karakoram and other high mountain ranges in Asia. There, they find that glacier flow is highly erratic with some glaciers, and others remain relatively unchanged over decadal timescales.

"It's incredible how these seemingly unchanging glacier systems come alive when we look at their changes through time -- they're much more dynamic than you'd think," Gardner said.